What food and drink trends are expected in 2019? You may be surprised 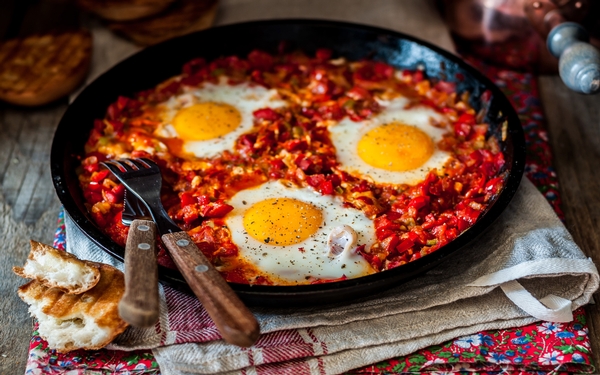 Sixty-nine percent of those surveyed by the National Restaurant Associated said "globally inspired breakfast" will be the year's biggest trend. Be on the lookout for shakshouka on menus in the coming

It’s that time of year, when the tea leaves, crystal balls, Tarot cards and other psychic tools come out, and the predictions are made.

They are to be consumed with a giant flake of Maldon sea salt. Still, while wishful thinking seems to be the foundation for many prognostications from the food-and-drink universe, some are rooted in observation-based reality.

They note that menu prices are outpacing supermarket prices, an economic trend that will have a negative impact on the restaurant industry’s bottom line as more and more diners opt to cook at home. One reaction to rising labor prices is the continued foray into automated kitchens — yes, robots — particularly in the fast-casual realm.

Chasing on the heels of the company’s 2018 report, which called for a rise in interest in Korean and Filipino cooking, restaurant-goers will apparently continue to embrace all things sour. B+W also predicts that the meal kit segment will find future growth by venturing further into casual dining chains, supermarkets and other convenient platforms.

Diners will also be gravitating toward variations on the katsu sando, the Japanese pork cutlet sandwich. The movement reaches far beyond pork, embracing chicken, shrimp, beef and other proteins.

“Someone will soon use Spam,” writes Michael Whiteman, and here’s hoping that Minnesota’s canned meat export becomes the darling of menus everywhere.

The report’s most entertaining segment is its “buzzwords” section, a rapid-fire roster that includes low-cal vegan ice cream, Zhoug (cilantro-based Yemini hot sauce), edible flowers, Khatchapuri (Georgian egg and cheese bread) and shiso leaf. If B+W’s relatively reliable track record is any indication, we’ll be encountering them all, and soon.

Sixty-nine percent of those queried — the highest rank in the survey — agreed that “globally inspired breakfast” (think shakshouka) will be the year’s leading trend. At 67 percent, “new cuts of meat” (get ready for the oyster steak) and “plant-based sausages and burgers” (64 percent) were the other top vote-grabbing trends.

The association’s beverage survey, which tapped the same chef audience, reveals that 65 percent of participants believe that locally produced spirits will be the year’s top trend, followed by house-roasted coffee (51 percent) and brewed-on-the-premises beer (50 percent).

Clairvoyants at online grocer FreshDirect foresee an emphasis on oats. Specifically, oat milk, which they believe is poised to surpass nut milks in the world of dairy alternatives. Cannabidiol, the non-psychoactive ingredient from the cannabis plant that’s also known as CBD, will appear in a wider range of food products (salad dressings, for example) and beverages. In addition, lower-carb cauliflower will continue its ascent in produce-section popularity.

Buyers for the 490 stores in the Whole Foods Market chain foresee an uptick in Pacific Rim flavors, from guava and passion fruit to mango and jackfruit. Snack packages will get an upgrade (prosciutto and aged mozzarella, for example), and frozen treats will move beyond chocolate and vanilla to embrace tahini, hummus, avocado and other nontraditional flavors.

Expect to witness a surge in the demand for watercress. That’s one of the main takeaways from the survey conducted by the folks behind Chef Battle, a national cooking competition. The study, which summarizes the thoughts of nearly 500 chefs, also identified “fermentation” as a hot 2019 trend.

The Culinary + Cocktails Trend Forecast from Kimpton Hotels & Restaurants is now in its fifth year, and it’s as detailed as ever. For example, those visiting the chain’s properties in 2019 should expect to encounter more floral flavors (lavender, rose) and superfoods (goji berries, camu camu), along with sumac, togarashi (the Japanese spice mix) and lovage.

Eighty percent of the company’s chefs said they plan to emphasize vegan and raw dishes, but many also plan to tinker with offal-based applications, from monkfish liver mousse to trippa (tripe) on bruschetta.

At the bar, Kimptonites will be pushing turmeric, rose, tarragon and celery root as most-popular cocktail ingredients. The mocktail will also bask in the spotlight, aided by a growth in housemade tonics, syrups and fermented ingredients.

Flavored alcoholic seltzers look to be on the upswing, and beer lists will focus on kolsch-style brews, dry-hopped sours and fruit-fortified concoctions. And because 2018 saw the ascendancy of both the Aperol spritz and frosé (frozen rosé), Kimpton mixologists will be serving what they predict will the year’s most talked-about libation: the Aperol frosé.

Food & Wine magazine asked a baker’s dozen culinary personalities from around the country for their Next Big Things, and some of the results definitely fall in the “please come true” category. For instance: screen-free dining.

That sounds very much like Demi, the 20-seat tasting-menu restaurant that Boulud protégé Gavin Kaysen is opening this winter on the same North Loop block as his Spoon and Stable.

Thomas Boemer, he of Revival, Corner Table and In Bloom (the Star Tribune’s 2018 Restaurant of the Year) had a hopeful reply.

“With chef José Andrés nominated for a Nobel Peace Prize, it shows the capability our industry has to improve the lives in the communities we serve,” he said. “We can assemble ourselves to help others as we move into 2019.”