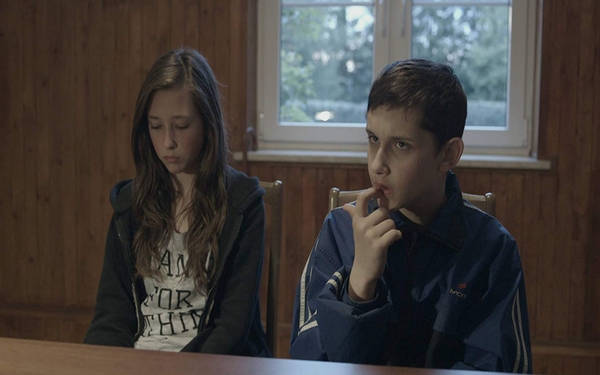 As the title indicates, the central event this lean 72-minute film focuses on is a projected first Communion for Nikodem, whose success with this rite of passage is by no means assured. (Wajda Studio)

“Communion” is a heartbreaking example of a classic documentary genre — the immersive, observational film that takes a bold leap and embeds itself with a small group of people.

Once there, this type of film goes deeper than deep into both the daily minutia and the broader emotional underpinnings of the lives it observes.

The risk is that the people chosen will not do or say anything worth the time invested in them, but with “Communion” that has not proved to be the case.

Directed by debuting Polish filmmaker Anna Zamecka, “Communion” has won a slew of awards, including best documentary in the European Film Awards, and it was recently named to the short list for this year’s best documentary Oscar.

All this for a film that spends most of its time in a tiny apartment in a town outside Warsaw where three people try to make the best of their lives.

Met first is 13-year-old Nikodem, a lively autistic boy struggling to put his pants on and get his belt to work right.

“Wrong, wrong, wrong,” he exclaims as the belt seems to display a mind of its own, a trio of words that seem to describe aspects of his family life as well.

Met next is older sister Ola, age 14, whom we see methodically going through Nikodem’s school bag and throwing all the books he doesn’t need for this particular day on the floor.

Ola is short on patience because, as we soon observe, young as she is, she runs the family as the only person in it with any kind of initiative and/or drive.

The siblings’ mother, for reasons that gradually become clear, has vacated the premises, and their father, though still living in the apartment, has given himself over to drink to the point where even the simplest tasks are beyond him.

Filmmaker Zamecka met this family by happenstance and ended up spending a year on the project. Though she shot for 35 days, the time she put in enabled her and cinematographer Malgorzata Szylak to disappear enough for the family to play out its dynamics as if no one else was there.

As the title indicates, the central event this lean 72-minute film focuses on is a projected first Communion for Nikodem, whose success with this rite of passage is by no means assured.

In charge of preparing him is Ola, who relentlessly goes over the correct responses with him and shows him how to physically receive the Communion wafer.

Not only does Nikodem have trouble remembering what he is supposed to say, his natural anarchic streak adds difficulties of its own.

For one thing, Nikodem has a habit of pretending to be various animals, including lions and bears. For another, he gets it into his head that gluttony is a cardinal virtue, insisting that even if it isn’t it should be.

Ola, as it turns out, has a bit of an ulterior motive for her interest in her brother’s Communion. She is hoping that the seriousness of the event will entice their mother to reconnect with the family, and she spends a good part of her time on the phone with her mom in an attempt to make that happen.

As filmmaker Zamecka says in a director’s statement, her film is not just about the ritual Catholic Communion but also “an existential tale about the impossible communion,” namely “a loving family united.”

“Communion” involves other individuals in the family’s life, including a visiting welfare officer and a teacher at the siblings’ Catholic school who talks about “getting two for the price of one: You forgive others, and God forgives you.”

The film’s willingness to let small moments play out pulls us into this story with relentless grace, and we can’t help root for Ola and her adolescent scheme, can’t help hoping that her attempts at managing her parents have even a prayer of success.