In ‘First Reformed,’ Ethan Hawke gave the performance of the year 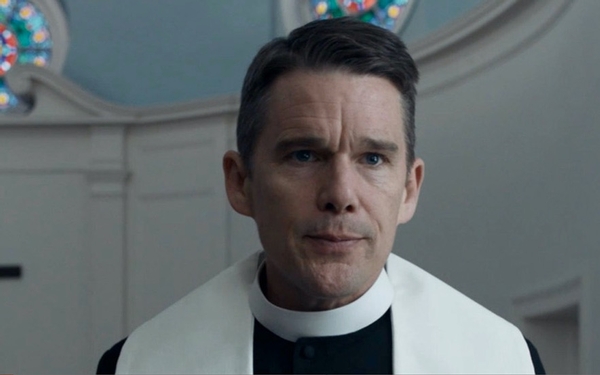 In “First Reformed,” Ethan Hawke almost never raises his voice. His character, the Rev. Ernst Toller, is a former Army chaplain who leads a small Protestant church in upstate New York, where he delivers sermons that are notably devoid of fire or brimstone. He speaks in a gravelly rasp of a voice, hushed and solemn, signaling the depth of his spiritual convictions but also the despair that has recently overwhelmed them.

Life has dealt Toller a series of blows: a dead son, a failed marriage, a cancer diagnosis. But Hawke’s grave, understated performance suggests that the character’s malaise may have a more mysterious origin. The actor’s handsome face is unusually pale and gaunt, his brow corrugated with worry. His eyes, so often alive with excitement, peer out with cold resignation at something dreadful on the horizon.

Why has God fallen both deaf and silent? Toller finds a troubling, infuriating answer when he meets a radical environmental activist, Michael (Philip Ettinger), spreading his own gospel of panic at Earth’s rapidly accelerating decline. Toller tries to counsel Michael, but it is Michael who counsels him: Taking up the younger man’s cause, the priest becomes a political radical and a spiritual rebel, embarking on a lonely descent into physical violence and moral chaos.

It sounds preposterous on paper, a grim psychological study couched in pulpy B-movie extremes. But on screen it is entirely persuasive, thanks to the unswerving conviction and artistry of its writer-director, Paul Schrader, who treats his protagonist as both an avatar of retribution and a man in the grip of a dangerous obsession.

You are drawn into Toller’s story by a steady, unblinking camera that quickens your pulse even as it encourages your contemplation. And you are held there by the mesmerizing clarity and intelligence of Hawke’s performance, which suggests that the most powerful epiphanies may also be the subtlest.

Possibly too subtle. Although the 48-year-old Hawke has won best actor prizes from several groups this season, including the Los Angeles Film Critics Assn. and the New York Film Critics Circle, he was conspicuously not nominated for a Screen Actors Guild Award or a Golden Globe, both key Oscar precursors. It’s easy to see why. This isn’t the kind of acting that calls attention to itself, that bowls you over with bravura feats of vocal distortion and prosthetic wizardry, and I say this with all due respect to Dick Cheney. (Sorry, I mean Christian Bale.)

If there is any way to measure Hawke’s triumph in “First Reformed,” it might be the sheer number of people I’ve heard praise his performance before quickly noting, “And I’ve never been an Ethan Hawke fan.” As someone who’s been an Ethan Hawke fan for a while, I certainly get that some are simply allergic to his appeal, more irritated than charmed by his combo of movie-star good looks and indie-darling ambitions.

Still, I can’t help but feel that anyone who was caught completely off-guard, who didn’t suspect that he had this kind of greatness in him, simply hasn’t been paying attention. “First Reformed” gives us the latest in a string of remarkable Hawke performances, following the subtle explorations of midlife discontent in “Before Midnight” (2013) and “Boyhood” (2014) and the biographical transformations of “Born to Be Blue” (2015) and “Maudie” (2017). It is, I would propose, the culmination of the richest, most accomplished and surprising career of any actor now working in American movies.

“Before Midnight,” of course, is the third entry in Richard Linklater’s series starring Hawke and Julie Delpy as Jesse and Celine, whose walking-and-talking love story began with 1995’s “Before Sunrise” and continued with 2004’s “Before Sunset.” More than his attention-grabbing roles as a sensitive prep-school student in “Dead Poets Society” (1989) and that surly dreamboat Troy Dyer in “Reality Bites” (1994), it was Jesse who announced himself as the quintessential Hawke character: the charmingly outspoken know-it-all, ardently romantic, philosophical and a bit of a blowhard. You rolled your eyes so hard at Jesse you didn’t even notice him deftly sweeping you off your feet.

“Before Sunrise” affirmed Hawke’s determination to look beyond the obvious. Rather than hewing to a more conventional movie-star path, he seized the opportunity to work with independent-minded directors, Linklater more frequently than any other, who would tease out his sharpest dimensions as an actor and refuse to treat him as just another pretty face.

There were missteps along the way, like “Great Expectations” (1998) and “Snow Falling on Cedars” (1999), in which the actor’s magnetism tilted into inertia. But he steadily found his groove through trial and error, plus a willingness to risk and experiment. The 2000s brought Michael Almereyda’s inventive modernization of “Hamlet,” in which Hawke played the title role as a mopey, knit-cap-wearing Manhattan hipster, tossing off his soliloquies in what you might call guy-ambic pentameter. It was a daring interpretation that invited ridicule and flirted with self-pity, but by the end it made acute emotional and dramatic sense.

It’s not considered high praise to describe an actor’s screen presence as “hard-working,” the notion being that any display of strain is antithetical to the assurance that defines great acting. But Hawke’s Oscar-nominated performance in “Training Day” is memorable, in part, because both the character and the actor let you see them sweat. As a rookie cop, the anxious but stubbornly principled foil to Denzel Washington’s charismatic villain, Hawke made the character’s struggle his own and pushed his way to greatness. He similarly held his own opposite Philip Seymour Hoffman in the 2007 crime drama “Before the Devil Knows You’re Dead,” cast as a man even more hopelessly in over his head.

It may have taken Hawke a while to hit his stride, but the past five years have amounted to nothing short of a midcareer renaissance. And even if we were to pass over the lovely two features he directed, “Seymour: An Introduction” (2015) and “Blaze” (2018), it’s a phase that seems both astonishingly rich and mystifyingly unsung.

Not many moviegoers saw him play the jazz trumpeter Chet Baker in “Born to Be Blue,” but it was an exquisite piece of acting, brilliant in its technique and aching in its vulnerability. He followed that with “Maudie,” giving startlingly abrasive life to Everett Lewis, the husband of the folk artist Maud Lewis (Sally Hawkins). Hawke took this foul-tempered lout and turned him into the not-so-better half of a tough but surprisingly tender love story.

Not exactly Celine and Jesse, to be sure. The “Before” movies may always feel like Hawke’s signature achievement, not least because the actor co-wrote two of them with Linklater and Delpy, and thus had a hand in shaping his character. In watching Jesse grow older on screen, we got to watch Hawke grow older too, and it was undeniably poignant to see this callow young dreamer brought down to earth, his high spirits gradually eroded by the doubts, regrets and compromises of middle age.

Something similar plays out in Linklater’s other great temporal experiment, “Boyhood,” with Hawke as a divorced dad struggling, over the course of 12 fleeting years, to do right by his kids. You could pair it with the recent “Juliet, Naked,” starring Hawke as a washed-up ‘90s indie rocker coming to grips with his relational shortcomings. It was a touching, cheekily self-effacing turn: Here was Hawke the brash, unstoppable Gen-X icon, now a father and (gulp) grandfather, doing his best to muddle through and make amends.

Hawke has appeared in his share of commercial genre movies too, though it’s telling that the most successful ones have been low-budget hits like “Sinister” (2012) and “The Purge” (2013). A major studio juggernaut is likely not in his future. He suggested as much in an August interview with the Film Stage, in which he took a jab at the proliferation of Hollywood superhero movies and how they had skewed the audience’s definitions of excellence.

He conceded that the much-acclaimed “Logan” (2017) was “a great superhero movie” but argued that it wasn’t a great movie in its own right: “It’s not Bresson. It’s not Bergman. But they talk about it like it is.” My own superhero fatigue compelled me to nod in agreement but also in appreciation: Wasn’t this, after all, another quintessential Hawke performance? The passionate outspokenness, the fierce defense of cultural literacy, the principled separation of himself from the industry he had so often regarded from an outsider’s perspective.

Many dismissed Hawke’s remarks as pretentious, but with regard to Robert Bresson and Ingmar Bergman, they could hardly accuse him of not knowing of what he spoke. “First Reformed” is, among other things, a rich tapestry of cinematic reference points, the most significant of which are Bresson’s “Diary of a Country Priest” (1951) and Bergman’s “Winter Light” (1963), each a masterpiece about a small-town clergyman struggling with his flock. There are shades of “Winter Light’s” Gunnar Björnstrand in Ernst Toller: the grim resignation, the frosty mien, the difficulty mustering real faith or compassion.

But it’s especially fascinating to consider Hawke’s performance through the eyes of Bresson, a filmmaker who sought a rigorous purity of emotion in every frame. To that end, he cast nonprofessional actors and ran them through multiple takes, as many as were required to drain any hint of artifice from a performance.

Hawke, of course, is a professional actor, a skilled technician and a world-famous celebrity; there is only so far he can disappear into any given role. When you first see him in “First Reformed,” you’re struck by how different he looks, with his haunted air, his black robes and clean-shaven face, absent the designer stubble that has seemed to cling to him since “Reality Bites.” There’s no mirth in his expression or swagger in his gait; he seems to have emptied himself out.

But there is more going on here than an actor submitting to an austere makeover or being cast successfully against type. (The role of a sincere, thoughtful, authentically doubt-ridden man of God is such a rarity in American movies, you have to wonder exactly whose type he might be.) The key to Hawke’s performance is that it feels even more wrenching, more truthful, when seen in light of his past work, which is to say the emotional history we bring with us to every new performance by an actor we love.

ALL ABOUT THE ART

Art, Hawke has noted, is his true religion, which gives him a fascinating kinship with the role he’s playing. I suspect he can identify with a man whose place of work and worship is regarded as an insignificant relic, one that draws a mere fraction of the congregation that attends the wealthy mega-church nearby. But Toller’s connections to that mega-church matter, and they make him a rare voice of integrity and accountability within a powerful, far-reaching and frequently corrupt establishment.

Toller has lost a son, a choice that feels like a devastating inversion of the cool-dad roles Hawke has played over the years. And there’s one moment when you might swear you could see Hawke the determined, know-it-all truth teller spring rudely to life, when Toller confronts his employer (Cedric Kyles) and, in a rare moment of preachiness, accuses the church of ignoring the dangers of climate change and abandoning its stewardship of God’s creation.

Toller doesn’t pretend to have all the answers, but like any thinker, or any artist, he knows there’s value in asking the questions, in pushing past the boundaries of what’s comfortable. The most thrilling revelation of “First Reformed” is that in playing a man who is utterly lost, Ethan Hawke the actor has never seemed more completely found.