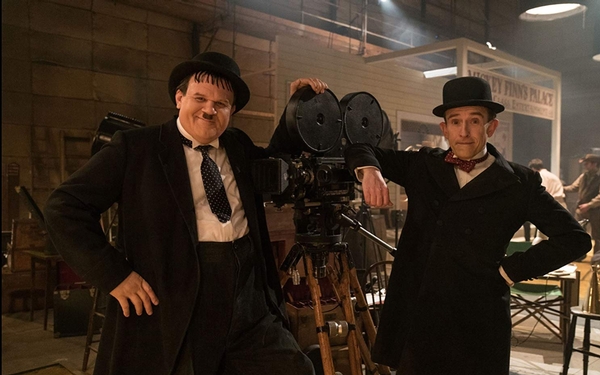 I can only guess at how “Stan & Ollie” will work for anyone unfamiliar with, or resistant to, the blithe charms of Mr. Laurel and Mr. Hardy, whose bowler hats inspired Samuel Beckett’s “Waiting for Godot” and whose beautiful rightness as two contrasting halves of a comic whole remains evergreen.

It’s a lot easier to say: It certainly works for me. For the record, I’m the comedy nerd who pored over William K. Everson’s “The Films of Laurel and Hardy” as a kid and later, in high school, first caught the duo’s 1937 feature “Way Out West” at the local Racine, Wis., Jerry Lewis muscular dystrophy fundraiser. Enough personal inventory for one review. Tastes change; stars of one era, one century, cannot mean the same thing to audiences of another.

Whatever your tastes, “Stan & Ollie” ranks as one of the best showbiz biopics of recent years, not because it “explains” the what and why of Laurel & Hardy, but because it’s a touching, gently sentimental evocation of a tricky decades-long working friendship.

The casting’s terrific. Steve Coogan and John C. Reilly play the “boys,” Stan and Ollie aka “Babe,” and they’re wonderful enough to make you forget the (very good) prosthetic makeup and allow you to concentrate on the human feeling.

These are two comedy lions in winter, near the end of their eternally entwined careers, when they were down but not out. Scottish director Jon S. Baird’s fleet-footed picture begins in 1937, at the zenith of the duo’s film career. An unassuming six-minute tracking shot begins with Stan and Babe in their dressing room, bantering about debts, ex-wives, testy contract negotiations with their producer, Hal Roach (Danny Huston). Then they stroll down a series of hallways, across the studio lot, and straight into the filming of the now-classic soft-shoe routine from “Way Out West.”

The rest of screenwriter Jeff Pope’s version of events unfolds in 1953. (The script’s based loosely on the book “Laurel & Hardy: The British Tours” by A.J. Marriot.) By this time Laurel and Hardy have embarked on a UK tour, re-creating routines from their movies (“County Hospital” and the like) in Newcastle and Glasgow, for a loyal if dwindling audience. They need the money; the tour, they hope, will serve as a prelude to their screen comeback, a comic riff on “Robin Hood.”

“I thought you’d retired!” a hotel clerk chirps at one point. Stories of real-life celebrities past their prime come with built-in pathos: The recent “Film Stars Don’t Die in Liverpool” (Annette Bening as Gloria Grahame) offered plenty, and “Stan & Ollie” does, too. Hardy’s heart trouble becomes serious business, and old career resentments (streamlined and ginned-up for the sake of narrative conflict) bubble up on the tour. Shirley Henderson and Nina Arianda are spot-on as Lucille Hardy and Ida Laurel, respectively, contentious one minute, empathetic the next.

The movie doesn’t force the comedy, even in slapstick mode. Coogan and Reilly take care of the readily identifiable physical mannerisms — the takes, and blinks, and tie-twiddles — so that they can ease into the heart of things. These are two men who love each other but don’t always like each other, Hardy an easygoing pleasure-seeker, Laurel a workaholic who never stopped tinkering with bits or scripts. “A hollow man who hides behind his typewriter,” Reilly calls him at one point.

That line’s on-the-nose, and the movie has its share of such moments. As with any biopic, plenty of liberties are taken: Laurel & Hardy’s various UK tours in the late 1940s and early ’50s are compressed here into one, and there’s no mention (comedy nerd alert) of the team’s grim final film, “Atoll K.” Little matter. The grace and tact with which Reilly and Coogan create their versions of these men never pushes for effect. It’s a modest film, but a very good one, and by the end I was quite moved by its valiant belief in decency and in the duo’s eternal appeal.

MPAA rating: PG (for some language, and for smoking)