‘The Sopranos’ at 20: Melfi, Carmela, Livia — the women of HBO’s mobster epic made it magic 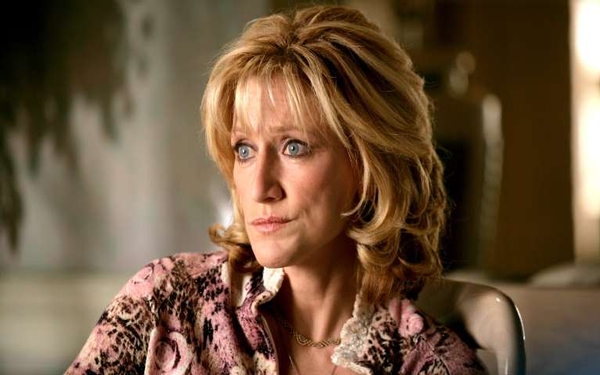 A mobster walks into a psychiatrist’s office.

As many have observed over the years, the basic conceit of “The Sopranos” sounds like a setup for one of those jokes no one tells anymore. But 20 years later, it remains the most famous narrative construct in television, with a punchline that still tests the limits of critical hyperbole.

The legend of Tony Soprano, and the men who made him — creator David Chase and actor James Gandolfini — has been parsed as reverently as “Ulysses” and credited with single-handedly elevating the medium previously known as the boob tube and sending it on its current march to world domination.

As with most legends, time blurs the facts in favor of hyperbole. Those who say with certainty that “The Sopranos” is the “best” or “most significant” show ever clearly don’t watch a lot of television. Many other series, before and after “The Sopranos,” contributed to the art form’s current cultural ascendancy, just as earlier series, including “The Larry Sanders Show,” “Oz” and “Sex and the City,” had already put HBO on the map as a purveyor of a new kind of television.

What often gets overlooked, even by the ecstatic and exacting fans, however, is that there was a psychiatrist in that office, and that psychiatrist was a woman. The show’s first episode was a bit more broad-humored than what followed (though “The Sopranos” was often very funny) and Dr. Jennifer Melfi, played by Lorraine Bracco, could easily have been just part of the joke — a made guy not only seeing a shrink, but a shrink who’s a girl.

But while the series made much of Tony’s women issues — his basilisk mother, his priest-infatuated wife, his mercurial mistress(es), his crazy sister, his frank if overly entitled daughter — none of it is a joke.

Chase has said, most recently in “The Soprano Sessions” by Matt Zoller Seitz and Alan Sepinwall, that what drew him to making “The Sopranos” was the idea of creating a family mob show, one that would appeal to women as much as men.

Not surprisingly, then, it was the women who made “The Sopranos” magic.

The caliber of performances certainly did not hurt — Bracco, Edie Falco as wife Carmela, Aida Turturro as sister Janice, Annabella Sciorra as the craziest of the mistresses Gloria, and the magnificent Nancy Mar-chand as “Anthony’s” mother, Livia, in a swan song for the ages.

Those kinds of performances, however, do not come unless the writers make the space for the actors to give them. And far from the female-shaped wall-stencils too often found (still!) in male-led dramas, the women of “The Sopranos” were fully realized and full-dimensional.

Which only made narrative sense. Even as a tricked-out metaphor for the desperate reality that often exists behind the wide-lawned facade of upward mobility, “The Sopranos” could only be as compelling as the people Tony was trying to appease and protect.

After all, it wasn’t the shootings, beatings, garroting and power plays, or even the wire-taps that were giving him panic attacks; it was his family. Unlike other fictional mobsters, Tony was not interested in going legit; his despair grew from the nagging realization that, like the blue-collar worker, the neighborhood mobster was becoming obsolete. When he should, by all rights, be coming into his own — as leader of his family and the Family — he was instead trying to care for his malicious mother, placate his bitter uncle, figure out why his wife was so angry and cope with his kids growing up with no respect.

Even the ducks he loved to watch just up and flew away.

The men of “The Sopranos” — the embittered and duplicitous Uncle Junior (Dominic Chianese), the loyal if dense Sylvio (Steven Van Zandt), the miserly germaphobe Paulie “Walnuts” (Tony Sirico) — remain faithful to the old ways, happy to provide plot points, exposition, color, humor and a wide spectrum of brutality in the time-honored “don’t forget the cannoli” way.

Yes, they were part of the satire that rippled through the show, which sent up male toxicity even as it celebrated it, but it was the breadth and depth of the female characters that made the show, and Tony, different. Who made it real.

It is strange that so many shows that attempted to follow in “The Sopranos” footsteps missed this entirely. The importance of strong female characters seems to be something television writers and executives like to continually discover with, say, the rising popularity of the female characters of “Mad Men” or “Game of Thrones.”

Livia Soprano (based, heaven help him, on Chase’s own mother) was miserable, manipulative and murderous (if she didn’t rack up the familial body count of her “I, Claudius” namesake, it was not for want of trying). Played by Marchand in the last years of her life, she was also hilarious, magnetic and made a mean baked ziti. Whether by intention or necessity, she provided the perfect foil for a son who famously managed to strangle an informant during a college tour with his daughter.

Carmela was an equally vivid conundrum of forthright honesty and systemic mendacity. She knew what Tony was, but “mob wife” was not how she identified; she knew he was cheating but did not admit it had anything to do with her marriage; she longed for something better, just not enough to give up what she had.

Through Meadow’s struggles with the nature of her father’s business, audiences saw how a crime family perpetuates itself — Meadow and Tony loved each other with a love so true it would have taken more than a single therapist to point out that parental love means making choices that don’t involve murder, fraud, prostitution and drug trafficking.

Still, it was Dr. Melfi who saved Tony Soprano from becoming a prisoner of his own genre. Although their initial encounter was something of an extended joke — with Tony narrating in general terms certain career “events” and “situations” that are, in fact, often violent crimes — Melfi served as a stand-in for the non-mob world, and the audience.

Listening to Tony talk, Melfi was certainly attracted by his personal power and the aura of the mobster, but she remained focused on his basic humanity, fueled by her belief that he was motivated by universal needs — for a loving parent, an honest marriage, an examined life. In the beginning, she believed that if those needs were met, Tony would leave the criminal life.

Whether she was kidding herself, as her husband and her own therapist continually warned her, is a question for both her character and fans of the show. Tony was undeniably, irrefutably a monster, as were most of those who surrounded him, so why do so many of us still love watching his life unspool in all its intentional and doomed brutality? Why do we laugh when he foils the feds, dote upon the few moments of brief remorse he shows over the vicious murder of a young woman?

Why do we even care that a mobster is having panic attacks?

If Melfi was the gauge, it started with curiosity and slid, inevitably, into the seduction of power. Melfi’s questioning was our questioning: How awful is too awful? At what point does observing become compliance?

In the third season, Melfi was raped in the stairwell of her parking garage. It was a powerful, disturbing and controversial episode; rape was not often shown on television, and many felt that this strong female character was somehow being pun-ished, brought low. The actual rape scene is, even seen now, brutal and realistic, a reminder that violence is not confined to inter-mob skirmishes or removed from ordinary people’s lives. It also forced Melfi, and to a certain extent, the show, to clearly choose sides.

Through a series of uncharacteristically ham-fisted plot machinations, the rapist is caught, then set free, then identified as someone who works in a fast-food place near Melfi’s work. Her pain intensified by this clear miscarriage of injustice, she realizes that she has the perfect weapon of revenge sitting in her office.

With a word she could put Tony’s talents to use for “good” and fully enter his world, in which the rest of the show exists.

But Melfi said no.

It was followed by Chase’s first use of a quick cut to black, and despite their continued relationship and many years of fan complaints, Melfi never did mention the rape to Tony. She chose, instead, to live by her rules, which were the old rules of these types of stories, in which violence is never the answer. By making that decision, Melfi joined Tony on the road to obsolescence. In the dramas that would follow “The Sopranos,” from “Dexter” to “Breaking Bad” to “Jessica Jones,” individual justice regularly voids the social contract, serial killers become avengers and Avengers become the leveler of cities.

And, indeed, as Tony slouched toward Holsten’s, Melfi slowly faded from “The Sopranos” narrative; when in the show’s penultimate episode she finally refused to treat him anymore, the moment was oddly anticlimactic but very, very telling.

A mobster walked into a psychiatrist’s office and changed television. But despite that psychiatrist’s best efforts, and the richness of the characters around him, Tony Soprano himself could not change. For all his newfound humanity, he was the leading mobster in a mobster story, and his fate had been fixed before she opened the door.