This Cal Poly student runs a restaurant out of his apartment. Now he’s writing a cookbook 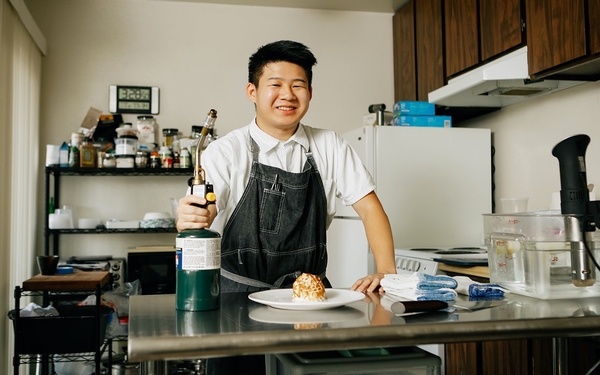 Wong cooks in full view of his customers. And the table where diners dunk buttery brioche into rich egg yolk and sink spoons into fudgy flourless chocolate cake is located just a few feet from his bed.

By running a restaurant out of his studio apartment in San Luis Obispo, Wong has been putting his culinary training — and Cal Poly’s “Learn by Doing” philosophy — to the test since the fall of 2017. He’s crafted multi-course gourmet meals for guests including his fellow students, teachers and Cal Poly President Jeffrey Armstrong.

Dench has earned the aspiring pastry chef attention from the likes of ABC’s “The Chew” and sites including The Daily Meal, Food Beast and Insider. Wong even spoke at the TEDX San Luis Obispo conference in October 2018, delivering a talk titled “Food, Identity and ‘Kung Fu Panda.’”

“When people were super-excited about it,” he added, “it was a really awesome thing to see.”

As a first-generation Chinese-American born and raised in Cupertino, Calif., Wong didn’t always appreciate the food his parents, who immigrated from Hong Kong, served to him and his two sisters.

Instead he preferred “artisanal treats like Hot Pockets and KFC,” Wong wrote in an essay published in Cal Poly magazine in May 2018.

“I felt a constant need to assimilate into the culture that surrounded me and, in turn, reject the one I had at home,” Wong wrote. “I wanted to fit in. I wanted to eat like the kids at school.”

At age 16, Wong got a job busing tables at a local Japanese restaurant. He gradually worked his way up to working as a host and waiter, but he wanted more back-of-house experience.

“I went on Yelp and looked up every four-dollar restaurant in the Bay Area,” Wong said, referring to the site’s shorthand for “ultra high-end” eateries.

High-school apprenticeships at two Michelin Guide-rated Silicon Valley restaurants, The Plumed Horse and Chez TJ, brought back “the food memories that I had (of) eating at the table with my family … the experiences that really got me to appreciate food and really got me to enjoy cooking,” Wong said.

“Initially, I wanted to get away from my culture,” he said, but seeing how other chefs relied on their roots made him realize “how unique my own cultural background was as a resource.”

Rather than attend a traditional culinary school after high school, Wong decided to study culinary food science at Cal Poly.

“Doing a pop-up dinner was always something on my college bucket list,” Wong said.

“I figured this was a really great way to challenge myself,” he added. “I wanted to learn more about the food I wanted to put out, and how I wanted to express myself on the plate.”

So once Wong moved into his own apartment, he saw his chance.

Inspired by an apprenticeship at Lazy Bear, a Michelin-starred San Francisco restaurant that started life as a pop-up, “I basically spent the summer curating the experience,” Wong said, developing his menu and scouring thrift stores for plates, glassware and silverware.

His restaurant’s name, Dench, came from an inside joke regarding professional soccer player Emmanuel Frimpong and his use of the slang term “dench” — as in English actress Judi Dench — as another word for “cool.”

When Wong released the first round of reservations for Dench on Instagram, “I was super-scared. I was like, ‘Oh my god, I’m going to have to bug my friends to come at my place,’ ” he recalled.

But his fears were unfounded: “I was fully booked within a couple hours,” Wong said.

For a between-course palate cleanser, he whipped up lime granita with honey tapioca and lemon foam. Dessert was peach mousse with peach sorbet and almond tuile cookies.

For Armstrong, his wife and their guests — Mike and Shannon Larabee, CEO and vice president, respectively, of Central Coast Distributing — Wong cooked up a May 2018 menu that included steamed Pacific oysters, pork tenderloin and watermelon consomme.

Wong described his culinary style as “California cuisine” made with local, seasonal organic ingredients and filtered “through my own Asian-American lens.”

His take on duck breast, for instance, was inspired by two traditional dishes: Cantonese barbecued pork and roast duck, a staple at Chinese banquets.

One of Wong’s signature appetizers, his 62-degree tea egg, similarly plays with tradition. The dish features a hard-boiled egg steeped in smoky lapsang souchong tea and soy broth, and is cooked in three separate stages to achieve “a real soft white and a nice jammy yolk,” he said.

Wong serves the dish, drizzled with Chinese red vinegar, with rice, thinly sliced scallions, sauteed trumpet mushrooms and a piece of brioche to soak up the warm, rich yolk.

“He’s got tremendous talent,” said Samir Amin, an associate professor of food science at Cal Poly who has dined at Dench.

“It was probably one of the best meals I’ve had,” said Amin, who’s also worked as a chef and food product developer. “You could see the dedication he has to cooking. … He showcases each dish and each ingredient to its fullest.”

HOW HE DOES IT

Diners at Dench pay $65 a person for a five- to seven-course tasting menu that includes appetizers, a savory main dish and dessert. The restaurant seats four people at a time.

Asked what it takes to run Dench, Wong estimates that he spends up to 30 hours shopping for, preparing and cooking each meal when the restaurant is in full swing. “It’s a whole week kind of thing,” he said.

Roughly a third of his studio apartment — about 50 square feet — is dedicated to the kitchen.

Instead of a bedroom closet, Wong has a metal storage rack stacked with everything from a breadmaker and a blender to cookie sheets, mixing bowls and muffin trays. A stainless steel table serves as his work counter, while a second rack next to the refrigerator hold even more tools: cooking pots, a toaster oven, a kitchen scale.

“To actually do a pop-up restaurant, that’s pretty ambitious. That takes a lot of time and dedication to do that,” Amin said. “Jimmy’s very focused on what he wants to do and how he wants to do it.”

Although Dench was hosting weekly seatings at one point — seven to eight times a quarter — Wong has largely stepped back from the restaurant so he can focus on another culinary project. He’s writing a cookbook.

Wong and his collaborator, Cal Poly graphic communications major Carly Lamera, hope to publish “Dench: Recipes and Stories from the College Pop-Up” in May. The pair have been getting pointers from Kendra Aronson, author of “The San Luis Obispo Farmer’s Market Cookbook.”

What else is on Wong’s plate? He’s scheduled to graduate with a bachelor of science degree in the spring.

But while the majority of students in Cal Poly’s culinary food science discipline go into food manufacturing or product development, Wong, who interned at food development and innovation company Pilot R&D in the summer of 2018, wants to work in the restaurant industry, Amin said.

“Ultimately, the goal is to open my own place,” Wong said.

Thanks to Dench, he’s had plenty of practice.

For more information about Jimmy Wong and Dench, visit www.denchrestaurant.com