‘Glass’ review: M. Night Shyamalan lectures us on comics mythology until you wanna break something 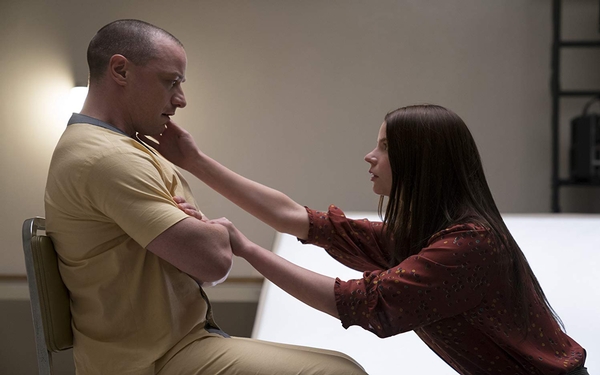 Two years ago, writer-director M. Night Shymalan landed a worldwide success and regained his Hollywood clout with “Split,” thanks mostly to James McAvoy turning it into a sizzle-reel audition for the part he’d already secured. McAvoy’s multiple-personality serial killer character, Kevin Wendell Crumb, darted from lisping 9-year-old Hedwig to the veiny, ferocious manimal known as The Beast, feeding on the “impure” in need of “suffering.”

The suffering, admittedly low-level, continues with “Glass,” a plodding Shyamalan lecture on the meaning of superhero origin stories.

It’s not a terrible picture: Shyamalan’s camera sense is often creatively unpredictable, more so than the script. And it’s diverting, for a while, watching its above-the-title stars work in varying keys of Acting a Ton (McAvoy), Acting a Teaspoon (Bruce Willis) and Acting Somewhere in the Middle (Samuel L. Jackson).

Still, “Glass” ranks as one of the more laborious trilogy cappers in recent years, forcibly entwining two narratives that don’t really feel like natural fits with each other. At this point in 21st century popular culture, do we truly crave a refresher on the meaning of comic books? The world, I think, needs a break from that stuff, and for a return to form for the filmmaker behind “The Sixth Sense” (1999) and “Signs” (2002). Commercial artists must mutate with the times, I suppose, and a filmmaker’s gotta eat. But we’re a long way from the time when Shyamalan’s stealth and atmospheric control turned simple stories, marching to their own methodical drummer, into damaged-outsider fables of unusual quality.

Let’s recap the “Glass” run-ups. In “Unbreakable” (2000), Willis played David Dunn, the mysteriously durable survivor of a train derailment masterminded by the man known as Mr. Glass (Jackson), whose lifelong case of osteogenesis imperfecta (brittle bone disease) positioned him as the thematic opposite of Dunn’s indestructability.

“Split” got around to linking these two archetypes with the McAvoy character(s), though only in a last-ditch, what-the-hell? epilogue. And now “Glass” sets up a showdown between the righteous do-gooder vigilante, the Willis character, and the marauding Beast persona, one of the McAvoy character’s so-called “Hordes.”

A crazy amount of screen time in “Glass” involves the process of getting Dunn, Glass and Crumb (which sounds like the world’s worst law office) confined in the same poorly managed and understaffed Philadelphia psychiatric institute, so they can start plotting their escape. Sarah Paulson, a new character in the mold of Betty Buckley’s therapist in “Split,” plays an imperious doctor specializing in patients who believe themselves to be superheroes.

Two returning characters help humanize what too often feels like a mechanical exercise: Anya Taylor-Joy’s Casey, who eluded Crumb’s clutches in “Split,” and Spencer Treat Clark’s Joseph, Dunn’s son, add some welcome warmth. Clark appeared in “Unbreakable” nearly 20 years ago, and bringing him back in a decent-sized role helps “Glass” almost feel like it’s sort of a real trilogy.

But however often Shyamalan references superhero tropes (“monologuing villains” get a shout-out) or his own penchant for twist endings, his latest movie struggles to gather momentum. Way back in “Unbreakable,” Jackson’s Mr. Glass bemoaned how comics superheroes “got chewed up in the commercial machine.” “Glass” proves it.

MPAA rating: PG-13 (for violence including some bloody images, thematic elements, and language)