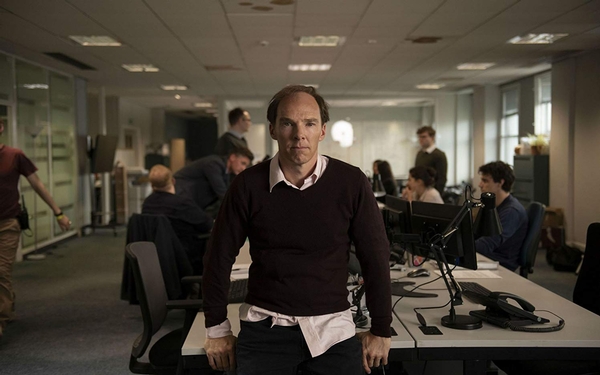 Benedict Cumberbatch plays Dominic Cummings, the architect of the successful Leave campaign, in a scene from the HBO film "Brexit." (Nick Wall/Channel 4/IMDb)

The future of Brexit is in doubt, but “Brexit” the movie is already here.

Days after the House of Commons rejected the deal negotiated by Prime Minister Theresa May by a historic margin, sending Britain further into political chaos, comes “Brexit,” an HBO film starring Benedict Cumberbatch about the 2016 referendum in which voters decided to leave the European Union.

The film, which airs Saturday, centers not on well-known figures like May, her predecessor David Cameron or prominent Brexit supporter Boris Johnson, but on Dominic Cummings (Cumberbatch), who as the director of the successful Vote Leave campaign used data to identify and target millions of inactive voters with the simple message “take back control” and ultimately scored one of the greatest political upsets in recent memory — one that many see as foreshadowing President Trump’s triumph a few months later.

Written by acclaimed playwright James Graham and directed by Toby Haynes (“Black Mirror”), it is the latest in a long line of fact-based political movies at HBO, the network behind “Game Change,” “Recount” and “All the Way.” But as an account of an event that is unfolding by the minute, “Brexit” is something slightly different — a work of instant history that arrives with the outcome unclear.

“It puts you in the room where it happens so you understand how it happened rather than what happens, which we all know,” said Cumberbatch in a recent phone interview. “That’s why I was drawn to this drama.”

Graham was inspired to write the film by the murder of Labour MP Jo Cox, a vocal opponent of Brexit, a week before the referendum. At the time, Graham was in New York in rehearsals for “Privacy,” a play about the corrosive effects of technology, at the Public Theater. Graham also wrote the TV movie “Coalition,” about the formation of the 2010 coalition government, which aired on Britain’s Channel 4 in 2015.

Viewing his native country from a distance, he wondered “what the hell was happening and how it could have descended into such an appalling state,” he said. “I knew I wanted to try to make sense of that campaign and how toxic it became.”

Graham is known for his deft handling of recent political and cultural history, most notably the Olivier Award-winning play “This House,” which charted the power struggle between the Labour and Conservative parties in the House of Commons during the turbulent 1970s. (A Broadway staging of “Ink,” a play about Rupert Murdoch’s purchase of the Sun newspaper, opens in April.)

Graham’s first draft was sprawling and epic and involved a larger cast of well-known politicians like former Prime Minister Cameron, but the “punchy and aggressive” Cummings — a relatively obscure political advisor once described by Cameron as a “career psychopath” — ultimately emerged as the most interesting protagonist. As a portrait of a prickly oddball wielding massive influence via technology, “Brexit” is reminiscent of “The Social Network” and even “The Fifth Estate,” which starred Cumberbatch as Wikileaks founder Julian Assange.

“I realized it’s these strategists who work behind the scenes who were responsible for the majority of the policies and the decision-making. It felt right and responsible to bring them kicking and screaming into the light in order to better understand what happened,” the writer said. (Graham was guided by two nonfiction books, “All Out War: The Full Story of How Brexit Sank Britain’s Political Class” by Tim Shipman, and “Unleashing Demons: The Inside Story of Brexit” by Craig Oliver).

The polarized politics of Brexit are similar to those in the U.S.: largely white, older, less-educated and rural voters rejecting the kind of globalization they felt was pushed on them by “elites.”

The Vote Leave campaign “appealed to people who were left behind and previously had been apathetic about politics but were mobilized in the millions to effect this historic change,” Graham said.

Though he is a long-standing critic of the European Union who is uniquely sensitive to these disaffected voters, Cummings is also wary of the referendum, according to “Brexit.”

“He knew a simple yes-no, in-or-out vote was a divisive and simplifying means to answer a very complicated question,” said Cumberbatch. “It polarizes and debilitates any potential for serious and substantive debate, where many people are disgruntled, whether they feel their generation has been left out by the establishment in Westminster, or whether they’re remainers [those who favored remaining in the E.U.].”

While the film’s portrayal of cynical, profane British politicians may remind some American viewers of the work of Armando Iannucci, especially “The Thick of It,” Graham saw it as “a classic sports movie” and took inspiration from “Moneyball,” written by Aaron Sorkin and Steven Zaillian. “Here was a team nobody gave any credit to” — the Vote Leave campaign — “They were the underdogs and they were definitely going to lose and yet they found a new way of playing that surprised everybody and changed the game forever.”

Director Haynes played up the satirical elements of Graham’s script, using an ironic classical music score (“Ode to Joy,” from Beethoven’s 9th symphony, features prominently) and wide-angle lenses to send up pompous politicians. Inflammatory figures like Nigel Farage are treated as crass buffoons who provide comic relief. The result is a boisterous romp of a movie about a subject that is anything but.

This Hollywoodification of the Brexit story has rankled some in the U.K., where the film was broadcast on Channel 4 earlier this month. Reviews have been positive, with Cumberbatch’s charismatic performance as Cummings inviting numerous comparisons to his role in “Sherlock.”

But some have wondered aloud whether it’s too soon to have perspective on the referendum and its aftermath, likening it to writing “All the President’s Men” immediately after the Watergate break-in.

Speaking hours before May’s deal was rejected on Tuesday, Graham politely offered a different view. “Our country is in free-fall and we haven’t hit rock bottom yet. I believe that drama and storytelling is a vital weapon in making sense of the chaos.”

Other critics have accused the film of “whitewashing” some of Vote Leave’s shadier tactics, including the (possibly criminal) violation of campaign spending limits, as inquiries are still underway, and of portraying Cummings as a sympathetic, wizard-like figure with an uncanny understanding of Britain’s forgotten men and women.

“I never treated this like journalism,” said Graham. “I didn’t think it was a checklist of everything that ever happened. I viewed it as a character study about the people who were involved and who made the decisions. I think the time is absolutely right to be doing that no matter what further revelations come out about conduct or behavior.”

Besides, he added, “This isn’t the defining version of Brexit. I hope there will be many, many plays and films about this in the future.”

The film was shot last summer in just 23 days, a tight schedule that forced everyone involved to commit to Graham’s script, said Haynes, even as the Brexit saga continued to unfold.

To convincingly portray his character, Cumberbatch mastered Cummings’ tricky Durham accent and sported a receding hairline. He also dined with the strategist and his wife. Like many of his peers in the British entertainment industry, Cumberbatch voted to remain in the European Union. Yet he found Cummings to be “generous and open and transparent and amusing.”

“One of the reasons I am an actor is to tell stories and to do that you have to empathize with your character and you have to go into their mind-set. That was a good thing for me to do, as a remainer, to get in a leave mind-set and understand it and understand the people [Cummings] was engaging in that election, that campaign, that vote. I think we all need to do that a bit more,” he said. “Just listen.”

Graham believes “Brexit” holds value for American viewers at a moment of similarly profound dysfunction. “Across the West, you’re either totally one thing or you’re totally another,” he said. “And I think it’s really poisonous for our politics.”