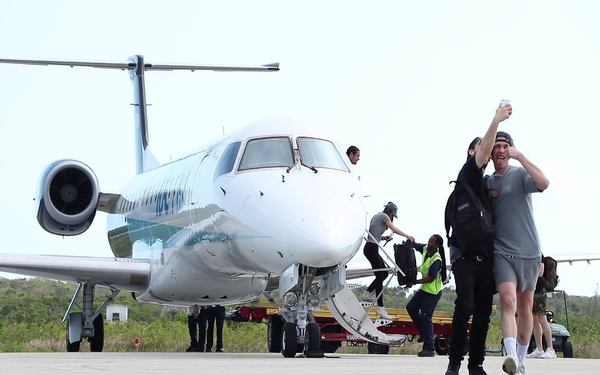 Those who arrive at Fyre expect the best in a scene from the Netflix documentary "Fyre: The Greatest Party That Never Happened." (Netflix)

For years now, the Coachella Valley Music and Arts Festival — the desert blowout that takes place every April on the manicured grounds of Indio’s Empire Polo Club — has been selling many of its passes before its lineup is announced.

But if that success indicates the event’s importance as what might be referred to as a lifestyle experience, Coachella has nothing on the Fyre Festival, which in 2017 sold out before its lineup was even booked.

At least that’s the timeline laid out in “Fyre: The Greatest Party That Never Happened,” a new Netflix documentary about the ill-fated festival in which a baby-faced former staffer recalls being assigned to arrange the concert’s acts almost as an afterthought.

“I’m a 22-, 23-year-old kid — I’ve never booked talent, forget about for a festival,” the guy says in the movie. But people had already plunked down thousands of dollars to attend Fyre on a so-called private island in the Bahamas. So book it he did.

“Fyre,” set to begin streaming on Friday, is one of two new films that examine what went wrong with Fyre Festival, which famously underdelivered on its vision of a tropical utopia populated by Instagram’s most beautiful women. As we see in “Fyre Fraud,” which came out Monday on Hulu, what attendees arrived to find instead was a barely assembled festival site with FEMA-style tents and sad cheese sandwiches jammed into foam containers.

Both movies are meticulous in reconstructing the elaborate scam perpetrated by Fyre’s creator, Billy McFarland, who ended up going to jail after pleading guilty to fraud charges.

But “Fyre” and “Fyre Fraud” make something else clear too, and that’s how insignificant music was to this music festival. Although Fyre eventually advertised a lineup that included Major Lazer, Disclosure, Migos and members of Kanye West’s G.O.O.D. Music crew, neither movie dedicates more than a few minutes to the performances that were supposed to go down.

And that’s because McFarland wasn’t selling music; he marketed Fyre not as a place to watch bands but as a place to rub elbows with models and take glamorous pictures to post on social media. The performances were there merely to provide some structure — to give a name to the thing for which people traveled to Great Exuma.

Fyre couldn’t have drawn an audience without Coachella first transforming the music festival into a kind of psychic space. Before the popular Indio show, which will attract an estimated quarter-million fans to its 20th-anniversary edition in April, festivals lived and died on the strength of their bills.

But Coachella branded itself — with plenty of help from companies selling clothes and booze and floral headbands — as a venue for fantasy; it offers an escape into an experience of style and luxury out of reach for most attendees in their real lives.

These days you can go to Coachella without spending much time at all at the Empire Polo Club; barbecues and pool parties, many sponsored by apps and retailers, go on all weekend at rented houses where the dramatic mountain backdrops mean you can take the same photo you’d get at the concert itself.

And Coachella is hardly alone in this. Other festivals, from Alabama’s beachside Hangout to the gourmet-geared Outside Lands in San Francisco, also work to entice ticket buyers more in search of a vibe, perhaps, than a sound.

Old-school music lovers are quick to lament this shift, one unhappy result of which is the considerable overlap that exists now between many American festivals. (After she plays Coachella this year, the country singer Kacey Musgraves will go on to gigs at Bonnaroo in Tennessee and New York’s Governors Ball.)

When the lineup doesn’t matter to a sizable portion of your audience, why go to the trouble of getting acts that aren’t playing every other show in the country?

The dim view that “Fyre” and “Fyre Fraud” take of McFarland’s debacle suggests that a tide may be turning; both documentaries skewer the self-obsessed influencer culture that Fyre embodied.

In a way, though, the appetite for not one but two films on the subject shows how seduced we remain by its false promise. Indeed, the Netflix movie — which, like Hulu’s title, is long on shots of women cavorting in bikinis — was produced in cooperation with the very marketing firm that helped put on the concert.

The next shady festival promoter eager to scoop up millennials’ money may need to deliver more than McFarland did. But he probably won’t lose any sleep deciding whether to book Diplo or Zedd.