Before her perfect 10, UCLA gymnast had to regain joy 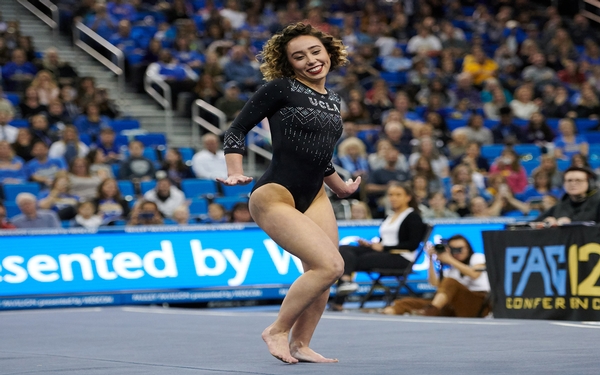 Katelyn Ohashi’s smile filled her face as she danced across the blue floor; her bob cut bounced with each movement in her now-famous floor routine.

UCLA’s gymnasts gravitated toward their 21-year-old senior captain, moving closer as the music blared. They began cheering and dancing behind her. Eyes were glued to her from all directions. Ohashi playfully stuck out her tongue, moving into position for a line of gravity-defying flips.

After she jogged across the mat, the music suddenly cut, bringing the routine to a halt.

It was a month ago, during practice, and coach Valorie Kondos Field was studying Ohashi’s movements. The timing was off. Ohashi, Kondos Field said, needed to give herself time to pause before her stunts.

The routine wasn’t finalized until a few days before Ohashi performed it at the Bruins’ season-opening meet Jan. 4. A week later, Ohashi mastered it, earning a perfect 10 at the Collegiate Challenge at the Anaheim Convention Center on Saturday in a display that went viral over social media.

Ohashi starts the routine with an innocent grin, then bolts down the mat and soars overhead as she completes a double layout. She follows that with three more twisting flips back down the diagonal. Between each series of stunts Ohashi playfully points at the crowd, shimmies her shoulders and juts her hands in the air as she dances. She whips her fists like she’s holding a lasso and shakes her curly hair, her teammates following suit behind her. After she lands in a split for the third time, she caps the routine with a resounding kick, smirking as the crowd erupts and her teammates thrust their fists in the air.

Almost the entire performance, she is smiling.

The video of her routine has earned more than 40 million views. “NBC Nightly News” interviewed her; Stephen Colbert imitated her performance on his show (well, he tried).

It wasn’t the first time Ohashi captivated millions with a routine.

She became the NCAA co-champion in floor in 2018 with a score of 9.9625. In that routine, Ohashi flashed finger guns and moon-walked across the floor in between mind-boggling flips to music from Michael Jackson. On one of her final leaps, she landed in a split and rose to her feet with an all-encompassing grin.

“I just loved it, because the routine is pure joy,” Kondos Field said. “I had a few people say … ‘Even though I am a more traditional fan … I can’t help but be joyful when I watch her routine.’”

Decades’ worth of accolades decorate the walls of the UCLA practice gym. Pac-12 and national championship banners form a rim below the ceiling. Photos of individual national title winners are displayed to the right of the training tables, beside the names of UCLA’s All-Americans and Olympians. Inspirational quotes stretch across the walls in white letters over a blue ribbon of paint; others hang above eye level in silver script. One says: “The only person you are destined to become is the one you decide to be.”

In a conference room with a wall of windows overlooking the gym, the team gathered for a meeting on a midwinter day during Ohashi’s freshman year. A sports psychologist asked each gymnast to share: What is the greatest obstacle keeping you from success?

What Ohashi revealed became a story Kondos Field repeats in nearly every interview she gives about her.

“She said, in front of her whole team and coaching staff, ‘I just don’t want to be great again,’” Kondos Field recalled. “And it was like I’d been socked in the gut.”

Ohashi’s mind-set was a response to years of pain, starting before she was even a teenager.

Ohashi grew up with her three brothers in Seattle, where her father, Richard, works for the public utility Seattle City Light and her mother, Diana, coached various sports. When Ohashi began showing promise in gymnastics, she moved to Kansas City, Mo., with her mother in 2006, then to Plano, Texas, three years later. Diana moved back to Seattle last summer.

Ohashi was 12 when she made the junior national team, and the years she spent competing at the elite level were marred by a gymnastics environment she now calls “toxic.” She had a thin frame with narrow cheeks but was regularly insulted for her size.

“I’ve been told I looked like I swallowed an elephant or a pig, whichever was more fitting that day,” Ohashi wrote in a blog post in August 2017. “I was compared to a bird that was too fat to lift itself off the ground.”

Ohashi kept her hardship mostly to herself, but found a sort of escape by venting in her brightly colored journals. She excelled at the elite level despite the biting comments, and the persistent pain in her shoulders and spine. In her last performance as an elite gymnast, Ohashi defeated future all-around Olympic champion Simone Biles to win the 2013 American Cup.

“She was one of my really big inspirations,” Biles said, “so to be able to train alongside her was actually very intimidating. I was terrified of her at first until we got to talking and became close friends.”

The first time Biles saw Ohashi cry was during an American Cup training session. Ohashi had competed through back pain for about two years, but the injury quickly became excruciating a week before the American Cup. When Ohashi ran a finger down her spine she hit a small ridge in the middle of her back. A vertebrae was out of place.

Said Ohashi: “I couldn’t even touch my back without practically being in tears.”

Ohashi stood on the beam in a pink leotard with her hair pulled into a bun, and took one shaky breath. She lurched forward, and soon she was flying, tumbling into a landing that was as graceful as the rest of that 2013 American Cup performance. Her eyes hardly left the beam, her hands quick to correct any lapses in balance by rushing downward with her fingers outstretched. Her posture was tense, her face expressionless.

After she lifted her arms for a final pose, a faint smile evaporated as she exhaled and dropped her gaze to the ground. She stepped down from the platform with her hands on her hips, and as she walked behind the table of judges with her coach, she briefly rubbed her shoulder with her right hand.

Ohashi hardly celebrated the American Cup victory. Her mother picked her up from the airport in her black sedan, and once they pulled into the garage Ohashi sobbed. Then they saw a doctor.

“The first thing I was practically told was, you might not ever do gymnastics again,” Ohashi said.

At first, Ohashi felt relieved. No more leotards, no more incessant judgment. She was burned out and finally had an excuse to walk away, but could she?

As a toddler Katelyn climbed up door frames, played with dinosaurs while propped upside down and vaulted over the couch on a small trampoline. She had always loved gymnastics, but it took a year for her to realize she missed it.

“How I’ve always felt is that the fun in gymnastics got taken away from me too soon,” Ohashi said. “As much as you love a sport, I don’t think love and joy necessarily go hand in hand. I think you can still be in love with the sport but just not happy in it.”

A month after the American Cup, Ohashi had shoulder surgery. She wore a back brace for four months before she was cleared to do rehabilitation, and began a gradual return to the sport about six months after the American Cup. With Olympic aspirations no longer possible because her injuries, Ohashi decided to pursue collegiate gymnastics instead, and began considering UCLA.

Kondos Field was sitting in a hotel room on a recruiting trip in Texas, deciding what to eat for dinner, when her phone rang.

The half-hour conversation began a recruitment process that eventually ended with Ohashi committing to UCLA. Kondos Field made a promise too: to help Ohashi rediscover joy in gymnastics.

When Kondos Field learned of Ohashi’s aversion to greatness as a freshman, she had to choose — remind Ohashi of her obligations as a scholarship athlete, or earn her trust. She chose the latter, and in the spring met with Ohashi regularly for coffee and meals but never brought up gymnastics. As the two grew closer, Ohashi’s perspective gradually changed.

“I was so used to there being ulterior motives, that it felt like I couldn’t trust people that easily,” Ohashi said. “So it was a lot of rewiring my brain that excellence isn’t meant to feel like the way it did before. Greatness isn’t supposed to remind you of abuse. Greatness is completely internal, and I was relating it to external stuff.”

After Ohashi’s freshman year she spent the summer self-reflecting and began working toward achieving happiness, starting with exploring interests outside of gymnastics. Her love of writing led her to study poetry and start a blog, Behind the Madness, with a friend, where she discusses body image, health and wellness. She aims to help others by sharing her story.

“Everything she does is with a purpose,” UCLA junior Kyla Ross said.

The gymnastics team’s Meet the Bruins exhibition Dec. 9 became a fundraiser for the Bruin Shelter, which provides housing to students who are homeless, after a year of organizing by Ohashi. She keeps a box of granola bars in her car and gives them to homeless people she meets in Westwood during hours-long conversations.

She used the attention from her sterling Saturday performance as a platform to talk about body image. When she and Kondos Field appeared on “Good Morning America” on Thursday, Ohashi read part of a poem she wrote about her own body-image struggles.

Ohashi is writing a poetry book that she plans to self-publish by the end of gymnastics season, focused on activism. A gender studies major, Ohashi said her gymnastics days will be done once she graduates from UCLA, but she plans to keep writing, and will intern for the Players’ Tribune as she explores photography in her free time and works on projects with several nonprofit organizations, helping survivors of domestic violence.

Last year, she shared a poem she wrote on sexual assault at an open microphone event in Los Angeles. In a video Ohashi posted to Twitter, a line of light traces her silhouette as she speaks; her voice brims with passion as audience members snap their fingers to the rhythm of her words. Her UCLA teammates were among the crowd, watching Ohashi perform on a different stage.

“We had some hard times with getting injured and kind of your dreams kind of getting changed,” Diana, her mother, said. “But maybe it’s even better. She’s been so happy.” 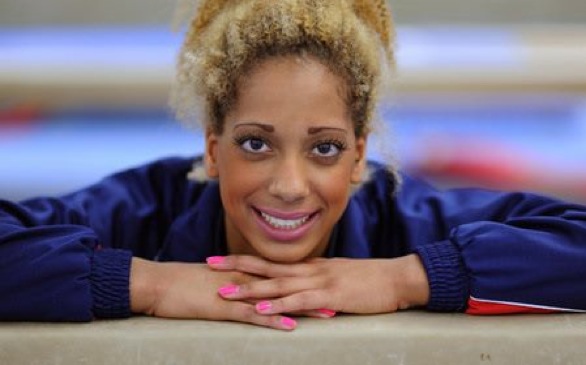 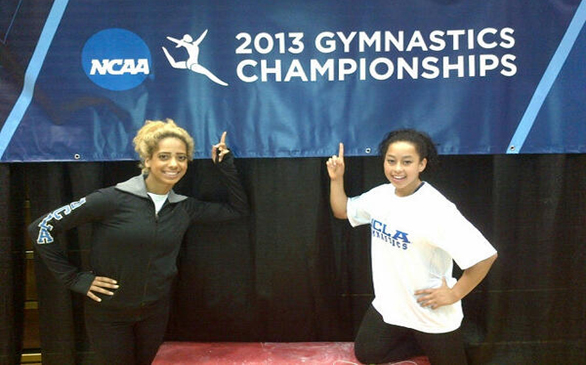