Debbie's Organic Cupcakes: Good for your Waistline as well as Your Taste Buds 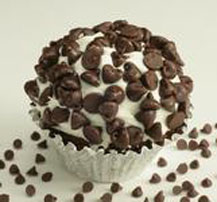 I am perpetually baffled by all the things I could possibly have delivered to my doorstep in Los Angeles: laundry, Thai food, herbs. And now, apparently baked goods can be added to that list.

But not just the typical, run o' the mill, fruit-of-the-oven goodness. No, no. L.A. now hosts an all-organic, delivery bakery service. No refined sugar. No cholesterol. No butter. No preservatives. And normally I would add ‘no taste' as the piece de resistance here, but not this time.

Most readers probably cringe at the thought of an organic, butter-free baked delight. However, not only are they organic, but eating a cupcake from Debbie's might actually be good for you.

The all-natural sweetener used in all of Debbie's goodies is called Xylitol. It has 40 percent less calories than sugar and – brace yourself – is a known cavity fighter! Plus, the sweetener may also prevent osteoporosis. So, you know what this means, it is now health-conscious to indulge in double chocolate cupcakes.

Debbie Adler is the head baker and CEO of her self-titled business. She bakes every order by hand and delivers within the Southern California area. Cupcakes, muffins, brownies, you name it and Debbie has a healthier, organic alternative to the oil-saturated nonsense sold in grocery store bakery cases.

For lethargic college students, delivery is the perfect solution for the munchies since it doesn't require leaving the couch. For busy soccer moms, Debbie's desserts satiate that sweet tooth without demanding more time in the kitchen.

OK, the moment of truth is here: I ordered the double chocolate cupcakes. In fact, not only did I bother to rummage through the discord known as the take-out menu assortment on the door of my freezer, but I also threw in a few cookies with those cupcakes (Each cookie weighs in at a quarter-pound). So, four cupcakes and a half-pound of baked cookie dough later, Debbie and her sweets transformed a cynic like myself into a believer.

If phone orders are placed before 2 p.m, same-day delivery within the Los Angeles area is offered at no extra charge. Sweet Debbie's bakes cookies, brownies, cupcakes and muffins in a wide variety of flavors. If you like your cookies crispy rather than chewy, Debbie will even bake them accordingly.

Sweet Debbie's Cupcakes is open seven days a week, 9 a.m.-6 p.m. Orders can be placed by phone or online. For more information, call (818) 294 2496 or visit www.sweetdebbiesorganiccupcakes.com .