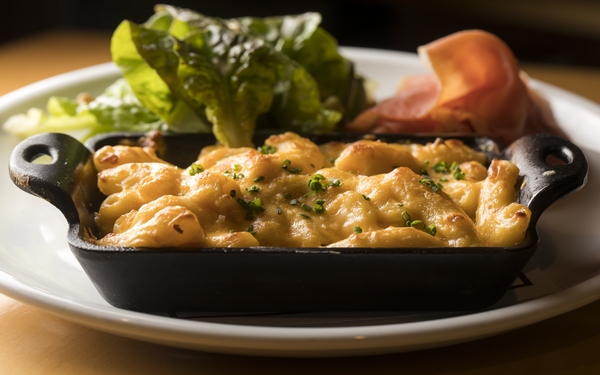 Does Edouardo Jordan need any introduction at this point? Now is the Seattle chef’s time: He’s got a pair of fresh James Beard Awards to top the pile of accolades accumulating around him of late, including a rare three-star review in The New York Times. His outspokenness about the issues surrounding race and the restaurant industry has arguably already begun to help change the game — his two Beard Awards came along with unprecedented recognition for other chefs of color. He’s just opened Lucinda Grain Bar, a bar and cafe that’s doubtless already as overrun as his wildly acclaimed Salare and JuneBaby. He’s even literally gotten his day: Seattle Mayor Jenny Durkan proclaimed Nov. 28 Edouardo Jordan Day in perpetuity in the city.

His indomitable determination aside, all the mad success goes back, simply, to the power of Jordan’s food. And in short order, even something as simple as his macaroni and cheese has become legendary. Served in its own individual-sized cast-iron pan, it comes with a side of very thin slices of Newsom’s very famous ham (which, by the way, James Beard himself first popularized by lavishing it with praise back in the day).

Jordan’s macaroni and cheese is surpassingly rich, absurdly cheesy, deeply satisfying and somehow just better than other macaroni and cheese has ever come close to being. Turns out if you pester him long enough, he’ll give you the recipe, and that the secret ingredient — aside from massive proportions of cheddar — is the velvety texture and mushroomy-intense flavor of Camembert.

Considering this food pretty much qualifies as a miracle, it’s quite easy and fast to make (aside from grating all the cheese — you might want to conscript a sous chef for that, and they will thank you once they get their family meal). It’s also fun: When you stir the almost-shocking amount of cheese into your super-creamy sauce base, a gooey texture evolves that’s almost like taffy, pulling in ribbons from the spoon, turning a gorgeous golden color from the paprika. When you taste the extremely cheesy sauce to assess whether it needs salt, you won’t really think it does, and you will want to just immediately eat all of it directly out of the pan. Don’t, for it gets even better. (And do add salt — give it maybe half a teaspoon. Trust me.)

After the sauce is mixed with the macaroni — when it comes to cooking the whole shebang — do as Jordan does, not as Jordan says. His recipe recommends putting it all in a medium casserole dish, topping it with (yes!) more cheese, then broiling it until the more-cheese is melted. At JuneBaby, as previously mentioned, the mac ‘n’ cheese comes in a small cast-iron pan, spread into a thinner layer, which gives additional surface area for broiled-cheese goodness — and, crucially, it’s not broiled just until the cheese is melted, but until it’s almost-burned-blistery-great. With apologies to the macaroni master, I’ve made a notation in the recipe about this important aspect.

In closing, be careful — at some point, you might encounter something hotter than a cast-iron pan that’s been very recently under a broiler, but hopefully you won’t be this close to it. And getting the macaroni to your mouth ASAP might make you forget: hot!

Serves four (at least), more as a side

To make the sauce:

1. In a medium saucepan, melt the butter over medium heat, then stir in the flour and cook to make a blond roux.

2. Slowly add the milk and cream, whisking to avoid lumps, and bring to a simmer, stirring so it does not stick to the bottom of the pan.

3. Once it has thickened properly, shut off heat and add all cheeses and the paprika.

4. Stir until cheese is completely incorporated.

1. In a medium stock pot, bring 3 quarts of water to a boil; season generously with salt.

2. Add the pasta, and cook until tender.

Bring it all together:

1. Let both the pasta and the sauce cool for about five to 10 minutes.

2. Combine the pasta and the sauce, and check again for salt.

3. Transfer the mixture to a medium casserole dish, and cover evenly with the cheese topping. (With all due respect to Edouardo Jordan, this is a “do as he does, not as he says” situation, so use the JuneBaby method for this step: Spread the mixture in a thin layer — not more than one or two noodles deep — in individual-sized cast-iron pans or in one large one, then cover evenly with the cheese topping. If you’re using one large pan, you might need to broil more than one batch; be sure to eat the first one before proceeding.)

4. Place under broiler until the cheese is melted. (Again, with apologies: Let the cheese get really brown, to the edge of burning.)

Recipe
Missing movie theater popcorn? Here's how to make it at home.
512 views