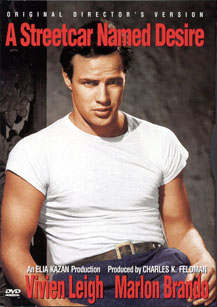 One of the greatest actors of his generation, Marlon Brando, comes to the big screen once again on Friday and Saturday, June 30 and July 1, for a special double-feature at the New Beverly Theater.

In Waterfront , directed by Elia Kazan, Brando stars as Terry Malloy, an ex-prizefighter-cum-dock worker who strives to stand up and fight against union corruption. Terry witnesses the murder of a man at the docks and, by film's end, is coerced by a trusted minister, Father Barry, to provide information to the courts that will help bring down various racketeers. The film co-stars Karl Malden (Barry), Lee J. Cobb and Rod Steiger.

In Streetcar , also directed by Kazan and based on the Pulitzer Prize-winning play by Tennessee Williams, Brando graces audiences as Stanley Kowalski, a passionate husband and soon-to-be father in post-World War II New Orleans. Terry is a Polish-American, blue-collar worker sharing a quaint apartment with his new bride, Stella (Kim Hunter). While their class distinction isn't a factor at first, the water begins to boil when Stella's sister, Blanche DuBois (Vivien Leigh), rolls in for a visit and doesn't stop the well-written insults from rolling off her Southern tongue.

The New Beverly Cinema is located at 7165 W. Beverly Blvd., in Los Angeles. Tickets are $7 or $6 for students with valid ID. All ticket prices are for double-features. For more information or to view a list of upcoming film programs, call (323) 938-4038 or visit www.michaelwilliams.com/beverlycinema.