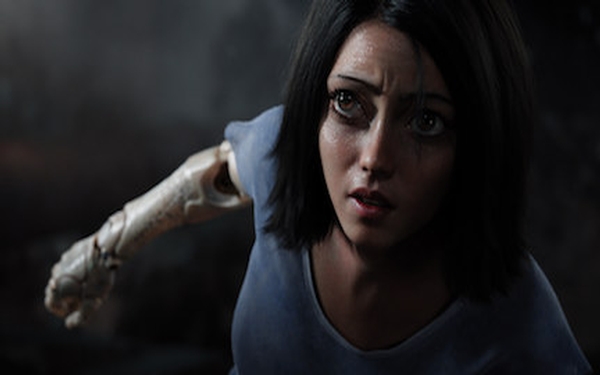 “Alita: Battle Angel” will never stand upon a massive pile of honors, nor will it be tossed into the garbage bin of failed movies. Any effort that has Robert Rodriguez (“El Mariachi”) as director and a screenplay from James Cameron (“Avatar”) and Laeta Kalogridis (“Altered Carbon”) automatically has some shine. But, that is not enough. The massive feature film based on the 1990 manga series created by Yukito Kishiro is simply the most underwhelming production to be released in years.

Efforts to bring the manga character to life look like bits and pieces from past TV and film projects including “Rollerball,” “Ready Player One,” “Dark Angel,” “Avatar” and “Star Trek: First Contact” with a little bit of “Pinocchio” tossed in. The biggest flaw is it all is jumbled together to tell a story that never reaches a finale just to ensure a sequel.

It all starts in the 26th century, 300 years after a great war has left the majority of the planet uninhabitable. The story starts rolling when Dr. Dyson Ido (Christoph Waltz) finds the head and spinal column of a young girl among the trash being discarded by the city up above. He just happens to be the local cyborg doctor and has been waiting for years to find a use for the body he built for his wheelchair-bound daughter who was murdered.

From the moment Alita (Rosa Salazar) opens her massive eyes, it’s impossible not to think of the big-eyed children painted by Margaret Keane. No matter the setting, it’s the eyes that dominate every moment.

Making Alita look like she popped out of the pages of a manga never plays out smoothly enough to make her appear humanoid enough. Alita comes across clunky and more marionette than cyborg.

It’s odd that her look is so weak, as the supporting cyborgs and robots has been beautifully designed. Ed Skrein’s hunter/warrior character is far more mechanical than Alita and yet comes across as being full of life. The supporting cast is generally more interesting than the Battle Angel.

This all could have been forgiven if the writing wasn’t so clunky and full of material that was dated when it was being used in ’50s horror flicks. It’s also annoying the way Alita is presented like a giggling teenager. The only payoff seems to be a forced romantic relationship with Hugo (Keann Johnson). The boy-meets-sorta girl story moves at such a quick pace it’s funny Alita’s head doesn’t come unscrewed.

As with all these life-after-disaster movies, an evil force gets rich and keeps secrets. Mahershala Ali is wasted as Vector, the boss of the Motorball league and puppet for an even more evil person calling the shots from the world in the sky. This baddy’s main role is to be the bridge to the next movie.

Alita’s big moment to shine — and destroy other cyborgs — comes when she gets a tryout for the Motorball league. All the carnage provides some entertaining moments, but there’s nothing new in presentation or style.

There’s the problem with “Alita: Battle Angel” in a metal nutshell. There’s no core of originality. It’s all just a collection of familiar sequences tied at the hip to the unemotional love story and presented in a so-so 3D version. Cameron’s connection to the project suggested the 3D would be remarkable after the stunning camera form for “Avatar.” There’s no such quality here, and that makes one more thing that causes “Alita: Battle Angel” to look like so many other films that have come and gone.