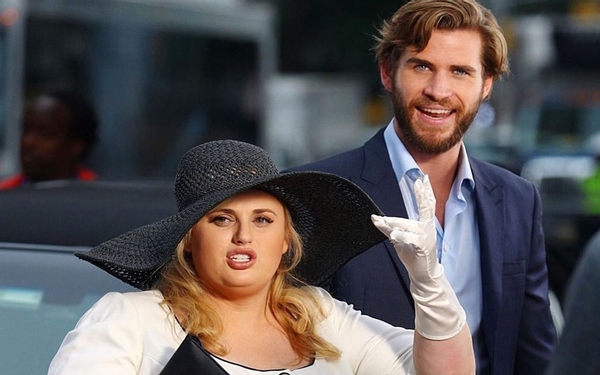 It’s titled “Isn’t It Romantic,” but a big theme at Monday’s world premiere of the new Rebel Wilson film was, “Isn’t it refreshing?”

The anti-romantic comedy, which debuts nationwide Wednesday, follows Natalie (Wilson), a cynical architect in the thick of her worst nightmare. After a bonk on the head, she seems to be living inside a romantic comedy, with the over-used tropes that often come with the genre.

But among the laughs, the film also “plays with and shatters” the stereotype of the gay best friend, as writer Erin Cardillo described it on the pink carpet.

(Warning: Some film spoilers ahead.)

As Natalie navigates this “matrix for lonely women,” she’s greeted by a very different version of her neighbor Donny, played by Brandon Scott Jones of NBC’s “The Good Place” and best-picture Oscar contender “Can You Ever Forgive Me?”

Though Natalie often spots women coming and going through his apartment, Donny in her new reality has transformed into her flamboyant “gay sidekick, who’s setting gay rights back, like, a hundred years.”

While Cardillo first envisioned the character, Wilson fought to get the casting right.

“Being the producer of the film, it was really important to me that obviously we cast an openly gay actor for the role of Donny so that the character could not in any way be construed as mocking a gay guy,” Wilson told The Times outside the Ace Hotel in Los Angeles on Monday night.

Toward the end of the movie, Donny returns to his “normal” self and informs Wilson’s character that he is gay — much to her surprise. He asserts that all gay men aren’t the same and explains that the women who pass through are just buying weed from him.

“I think we make a really clever comment about how gay characters have been marginalized in the past few decades,” Wilson explained further. “It’s come a long way now like (with) the work of Ryan Murphy, presenting such complex characters, but only 10 or 20 years ago that wasn’t represented.

“So, we really make fun of that in our film, and we gave Brandon his first co-lead in a feature film with this movie,” Wilson added. “I’m so proud of him. He just smashes it out of the park.”

He continued, “But I think we’re moving in a direction where we’re realizing, ‘Oh wait, stories that aren’t about what we’ve always seen Hollywood do are universal at the end of the day.”

Related: Writing the modern rom-com: How the creators of ‘Isn’t It Romantic’ twisted tropes to both satirize and satisfy

Betty Gilpin, of Netflix’s “Glow,” also stars in the Warner Bros. film as Natalie’s assistant. While her character tackles the trope of women competing against one another in the workplace, she applauds Jones for pushing forward LGBTQ representation through his character.

“I think that actors for a long time have been grateful for a part in a movie, so they sign up to be three-trait kind of foils for the lead character,” Gilpin said.

“That has sort of perpetuated the myth of (a person who identifies as LGBTQ ) and it’s not (true),” she added. “Everyone is carrying around their own dreams and their own pain, and I think Brandon weaves that into the movie so beautifully.”

Costar Adam Devine agreed: “I think this movie did a great job of inclusiveness and made it feel like a movie that is today. It’s not just all white guys that (are) exactly like me.”

As real-life couples walked the carpet behind him — including Nick Jonas supporting star Priyanka Chopra Jonas and producers Gina Matthews and Grant Scharbo (and pop star Miley Cyrus filled in for her husband, Liam Hemsworth, who also stars in the film), Jones shared that he was drawn to the character because Donny is “all about love” and uses humor to make a poignant statement about sexuality.

“If you have the capacity to find something funny in something horrible… that’s part of the healing,” Jones said. “It’s not for everybody, but it’s a part of that process.”