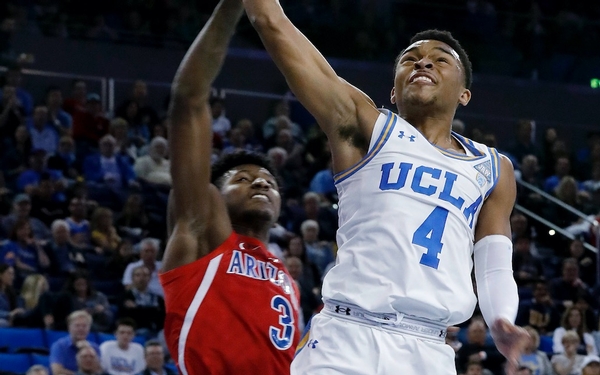 UCLA's Jaylen Hands (4) goes up against Arizona's Dylan Smith in the first half on Saturday, Jan. 26, 2019, at Pauley Pavilion in Los Angeles. (Luis Sinco/Los Angeles Times/TNS)

Kris Wilkes and Jaylen Hands returned to UCLA for their sophomore seasons, giving college another try in an effort to boost their NBA draft stock.

If they want to go in the first round, they might have to try, try again.

Both players project as likely second-round picks should they declare for the June draft, according to a veteran NBA scout who has watched the Bruins this season. The scout said the only UCLA player who might be able to sneak into the first round is center Moses Brown, and that would require the talented but raw freshman to wow a team in a workout.

“He’s got the length, he has the athleticism and when he wants to, he runs the court pretty well,” the scout said, speaking on condition of anonymity because he was not authorized to publicly discuss college players. “Obviously, the shot is something of like a joke, the way he shoots it” by catapulting the ball with one hand.

“But as a shot-blocker, above-the-rim finisher, lob runner type of player, he has what teams are looking for, or at least flashes of it.”

At a self-proclaimed 7 feet 2, Brown puts the up in upside. His true height will be revealed in May at the NBA combine in Chicago, should Brown attend in an effort to gauge his draft prospects. He said before his arrival at UCLA that he intended to play only one college season but has since backed off that assertion.

“My goal is to make it to the NBA one day,” Brown said this season, “but I’m not in any rush so however long it takes me, I’m willing to work as hard as I need to.”

Brown has averaged nearly a double-double, scoring 11 points and grabbing 8.4 rebounds per game, but also has drifted at times, including a three-game stretch last month in which he failed to reach double digits in either category. His inconsistency is among the issues that make him a likely second-round pick at this point, the scout said.

College players have until April 21 to declare for the draft. By then, UCLA could have named its successor to coach Steve Alford and interim coach Murry Bartow, a decision that could factor into the willingness of players to return for another season. Players who declare for the draft have until May 29 to withdraw their names from consideration while preserving their college eligibility.

The scout said Wilkes had a good chance to be drafted in the first round last year. But his standing among teams has slipped, the scout said, as a result of having shown little improvement. The 6-8 small forward is averaging a team-high 17.4 points but making only 32.0 percent of his three-pointers, down from 35.2 percent last season, and he’s not having much of an impact in other areas.

“My biggest issue with Kris is that he doesn’t do a lot of things well, like, he’s not a jack-of-all-trades type where he’s rebounding, passing, making plays on defense, so he’s basically a scorer and he’s not an aggressive scorer,” the scout said. “I don’t know what it is about him, but there just always seems to be something missing a little bit.”

Hands won praise from the scout for having strengthened his 6-3 frame while becoming a more team-oriented player who leads the Pac-12 with 6.5 assists per game. But Hands has regressed as a shooter; he’s making 33.6 percent of his threes compared to 37.4 percent last season.

The scout said he envisioned Hands as a player in the mold of Ish Smith, a backup point guard for the Detroit Pistons.

“I don’t see many teams being willing to take him in the first,” the scout said, “but he’s gotten better and kudos to the kid. He’s obviously worked pretty hard.”

Sophomore Chris Smith continues to intrigue teams as a wiry, 6-9 guard who is often the most athletic player on the court, though he’s also confounded them with a tendency to force shots and dribble into a pack of defenders.

“With him, it’s all about consistency,” said the scout, who projected Smith as a late-second-rounder at best. “There’s too many moments where you’re like, ‘Where did Chris Smith go? He hasn’t done anything tonight.’ He doesn’t really play within himself, which is always a little bit of a red flag on our end because if you don’t play within yourself in college, when you’re around a pro roster situation with more competitive players, how are we going to trust you to make the right decision here?”

Redshirt freshman forward Cody Riley, who declared for the draft last year before returning, and redshirt junior guard Prince Ali both project as G League players or ones who could play overseas, the scout said.

None of the Bruins’ prospects has been helped by playing for a team that’s gone .500 while displaying selfish habits. It would be easy, albeit not realistic, to say that every player hoping for a career in pro basketball should return next season, giving themselves a chance to show growth for a new coach on a winning team.

“Here’s the problem with that,” said Mike Montgomery, who coached Stanford and California as well as the Golden State Warriors. “I mean, certainly any young person would be better served maturing, growing, learning how to play the game, the fundamentals, the psychological, emotional maturity — all be would be better served to stay and get to that point where they’re ready to go in and handle the NBA lifestyle.

“It looks great and it is great, but it’s not easy. Given the alternative, if somebody’s saying, ‘Look, you can make this number now even though you may not play (and have to go to the G League),’ that’s really alluring to these young kids.”

While second-round draft picks aren’t assured guaranteed contracts, any rookie who makes an NBA roster during the 2019-20 season will make the league minimum of $897,158.

The potential for that kind of salary can be hard to pass up.

“How many kids that are going to college at UCLA to start as freshmen are thinking, ‘My first job’s going to play me a million dollars?’” Montgomery said. “It’s a pretty good situation, especially for a lot of these kids out of the environment they come out of, but what you should be thinking about in terms of your life, your enjoyment, your preparation for later in life is the opportunity to get a second contract, because that’s what pays is the second contract and that’s where the big money is going to be made, and a lot of kids can’t do that if they don’t do it properly and they run that risk.”

Montgomery said he tried to get his players who vacillated about their futures to stay in college, with varying success.

“I thought they weren’t quite ready and with some that proved to be the case and others, they looked back and said, ‘Well, what do you know?’ “ Montgomery said. “So it’s a tough decision to make.”

For Wilkes and Hands, mulling their futures for a second time, it could be doubly difficult.