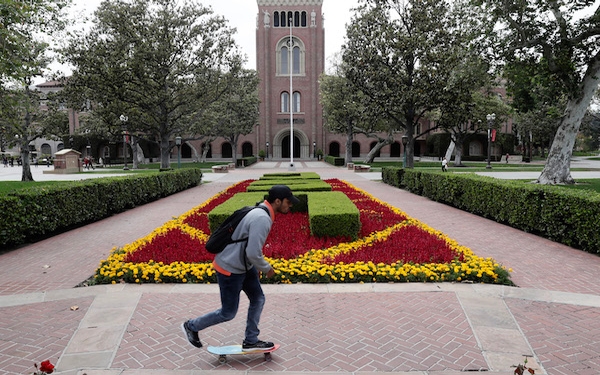 The USC campus and the scene outside Bovard Hall. Six male graduates filed a lawsuit this week accusing a men's health doctor of sexual battery and harassment during appointments.

Colleges and universities across California are scrambling to revise the way they handle sexual misconduct cases after a state appellate court ruled that “fundamental fairness” requires that accused students have a right to a hearing and to cross-examine their accusers.

The decision last month came in a University of Southern California case but applies to all California public and private colleges, and prompted many to immediately halt Title IX investigations while they reshape their procedures. California State University, the University of California and USC, Claremont McKenna and Occidental colleges confirmed that they have made or soon will be making changes.

They already had been bracing to do so. In November, U.S. Education Secretary Betsy DeVos proposed controversial new federal rules that would strengthen the rights of the accused in sexual misconduct cases. The rules would apply to Title IX, which bans discrimination based on sex in educational programs and activities at schools that receive federal funding.

At many campuses, investigations are conducted in small, private settings. Accused students are not allowed to directly confront their accusers but may pose questions through a Title IX investigator who meets separately with each of them.

Officials and advocates question how academic institutions will be able to handle proceedings more common to courtrooms as well as the effects of potentially harsh confrontations between students. They also wonder about how much new funding, hiring and training will be required to adapt.

The California court ruling marks the latest twist in the highly contentious arena of campus sexual assault. Many universities adopted new Title IX procedures in 2016, as directed by the Obama administration, to become more sensitive to victims — such as indirect questioning.

Those changes set off a national backlash. Students accused of sexual misconduct have filed scores of lawsuits arguing that campuses denied them fair hearings. They have won cases in states including California, Ohio, Michigan, Mississippi and New Mexico.

California campuses must immediately comply with the appellate court decision, which has sparked a wide range of reactions.

“It will protect millions of college students in California from losing their education in a process that’s arbitrary,” said Mark Hathaway, a Los Angeles attorney who has pioneered much of the litigation on behalf of accused students.

At Cal State Dominguez Hills, news that those who report sexual misconduct could soon be subject to confrontational hearings unnerved many students interviewed.

“As it is, it’s hard to report what happened to you. … ” said Mariah Rubira, a senior who was interviewed as a witness in one campus sexual misconduct case and said the current process works well. “#MeToo was big. People started to take a stand. I think this change would just push people back into silence.”

Suzanne Taylor, University of California’s interim systemwide Title IX coordinator, said UC began exploring how to create a “fair and compassionate” hearing model after DeVos unveiled her proposed rules, but Taylor said the court ruling has given that effort “more urgency.” She said the process will take time, but the university expects to issue an interim policy in the next few weeks.

Under UC’s current process, questions from both accuser and accused are submitted to the Title IX investigator, who may choose not to ask some questions deemed “harassing.”

“Obviously we have to comply with the law, and we will,” Taylor said. “We’re really going to do everything we can to protect both our community and the integrity of our process.”

Cal State, meanwhile, has temporarily stopped proceedings in 75 cases that probably are eligible for hearings, said Leora Freedman, the system’s deputy general counsel. She said she did not know yet whether any closed cases would need to be reopened.

The case that triggered the ruling involved Bryce Dixon, a former USC football player who was accused of sexually assaulting a female student in 2014. In a Jan. 4 decision, a three-member panel in the Second Appellate District unanimously found that Dixon was denied a fair hearing. (The ruling called Dixon “John Doe,” but his attorney, Hathaway, confirmed his identity.) The appeals court reversed a trial court ruling that Dixon had violated the student code of conduct and USC did not appeal.

The court ruled that in cases where students are facing “serious discipline,” such as a suspension or expulsion, and the credibility of witnesses is key, a university must permit cross-examination of “adverse witnesses” at a hearing either in person or via such means as videoconferencing.

The person who investigates the case, the court said, cannot also decide whether the allegations are true. That model, used by USC and many other universities, the court ruled, improperly “places in one individual the overlapping and inconsistent roles of investigator, prosecutor, fact-finder, and sentencer.”

The court ruling appears to allow cross-examination through a neutral intermediary, but DeVos wants to let students or their attorneys on both sides do the questioning.

Scores of universities, including the UC and CSU systems, have voiced opposition to such direct questioning, fearing it would intimidate victims of sexual assault and dissuade them from coming forward. It’s unclear how many universities may now decide to allow it. USC has said it might. UC and CSU plan to stick with indirect questioning.

“We have no intention … of putting in place those aspects of those Title IX rules that we believe would be harmful to our community unless and until we are absolutely legally required to do so,” Taylor said of UC.

Cal State’s Freedman said private meetings with students were more effective in reaching the truth. “The subject matter of these cases are of a personal, intimate nature. It’s difficult to talk about these things,” she said.

Sokolow, of the Association of Title IX Administrators, said most colleges and universities will “find themselves in over their heads” trying to comply with the court ruling. Cross-examinations in courtrooms, he said, are conducted under strict rules by trained professionals.

He said his organization has been warning California campuses to prepare for change since 2015, when a San Diego judge ruled a Title IX procedure at UC San Diego unfair.

“This was something that was eminently predictable, and now we’ve got California institutions behind the curve,” he said.

Stephanie Vasquez, 22, a student at Cal State Dominguez Hills, said she feels for campus victims of sexual assault. When she was 10, she said, an older neighbor tried to peer up her skirt. She tried to tell on him but was brushed off. The experience deeply affected her.

“I just wanted to be home all the time, I didn’t want to go to school anymore because there was a possibility I would see him,” she said, as she relaxed in the campus Women’s Resource Center.

Vasquez said interrogating victims at a contentious hearing is not the right way to try to understand what happened to them. They need more gentle handling in a space in which they feel comfortable.

“As a dude, there are times where a situation can be confusing. You want to make sure it’s clear what happened between those two people,” he said. “I think a hearing would help show who’s telling the truth. … If I’m accused of something and I’m innocent, I would want to ask questions and have the opportunity to talk it out face to face.”