Oscars producers on landing Queen, going host-less and dealing with this year’s ‘curveballs’ 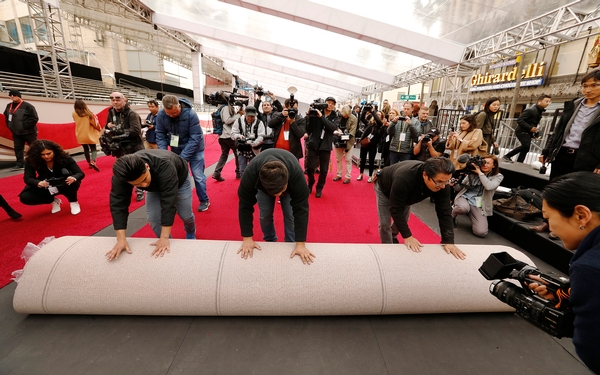 Producing the Academy Awards is a hugely challenging job under the best of circumstances — and it’s fair to say that the job this year has come with some, shall we say, unexpected complications.

From planned host Kevin Hart dropping out in December amid controversy over past homophobic jokes and tweets to the firestorm over a now-abandoned plan to present the awards for four key categories during commercial breaks, the producers of this year’s Oscars show, Donna Gigliotti and Glenn Weiss, have had to roll with a few changes along the way.

Throw in the added pressure of trying to honor the film academy’s pledge to keep the often-bloated show to three hours and attempting to boost the ratings from the all-time low they hit last year and you could argue that right now, they’ve got one of the toughest gigs in show business.

Just days before Sunday night’s show, The Times spoke by phone with Gigliotti, who has produced such films as “Shakespeare in Love,” “Hidden Figures” and “Silver Linings Playbook,” and Weiss, who won an Emmy last year for directing the 90th Oscars, about the sometimes bumpy road to this year’s Academy Awards and why they are nevertheless fully confident it will be a night to remember.

(The interview was conducted shortly before the academy confirmed that there would be no performance of original song nominee “All the Stars” from “Black Panther” on this year’s telecast, reportedly because artists Kendrick Lamar and SZA are unavailable due to “logistics and timing.”)

Q: First of all, how are you feeling right now, just a few days out from the show, and what’s kept you sane through the roller coaster of it all?

Gigliotti: Well, if you could see us, we look remarkably healthy and fresh-faced and there are no bags under our eyes. I’m serious — don’t laugh. Because we think the show is in good shape.

And how did I stay sane? I didn’t read any press. I still have not. And I will hold to that until (11 p.m. Eastern) on Sunday.

Weiss: And part of keeping sane is keeping, so to speak, your eye on the prize. At the end of the day, we’re producing an entertaining and moving and flowing show — with all the changes that came along, we kept working on achieving that goal.

Q: The first major obstacle to get over was when Kevin Hart dropped out as host. How did you pivot from there? It’s been 30 years since the Oscars has had no formal host. Did you immediately see that there could be some upside to going that route?

Gigliotti: First of all, I’m going to say this in all honesty: Glenn and I did have a conversation very early on about the possibility of going hostless, and I have notes to prove that. That goes back to the beginning of October. We did have that conversation.

Q: Is there an overarching theme to the show this year — and if there is, how did you arrive at that?

Gigliotti: If there is a theme — and I think there is — it’s about movies as an empathetic art form. Movies connect people. Movies bring people together. Movies have cultural importance. That’s sort of our theme, which we take a lot from the films themselves — “Black Panther” being a perfectly good example of this, where there are a lot of people who saw “Black Panther” who now understand something about black culture they didn’t understand before.

Q: A few days ago, you made the big announcement that Queen is performing, and there’s been speculation that they’ll be opening the show. What was the thinking about having them perform along with the nominated songs? There have been years when the songs haven’t been performed at all. How did you arrive at the songs plus Queen?

Gigliotti: Glenn and I talked about Queen early on — and we can tell you that Queen are going to open the broadcast.

How did we come to that decision? Well, you have to look at the fact that this is a movie [“Bohemian Rhapsody”] that has done in excess of $800 million worldwide business. Japan alone is $100 million. We are putting on a show for a worldwide audience. So Queen is kind of a natural for us. I mean, don’t you want to be at rehearsals when Queen are rehearsing? It’s exciting. It’s fantastic.

Weiss: And again, adding to all the statistics Donna just quoted about the worldwide appeal, just opening the show with that kind of energy and known music and excitement allows us to start this in a different way, and we think it’s really good to just jump right in.

Q: Donna, at the Oscar nominees luncheon, you referenced Steven Soderbergh’s acceptance speech for directing “Traffic” as being sort of a model of a great, pithy, emotional speech. He has since said that he thinks that’s hilarious, because he was drunk and winging it because he didn’t expect to win. Did you hear that he said that — and what’s your reaction?

Gigliotti: I didn’t know that. I also don’t actually believe him. I think that is young Mr. Soderbergh being glib. I think that he does not really want to admit that he was very moved and that he gave a moving speech. That’s what I honestly think.

And you know what? If I think back to that year, which was 2001, I’m pretty sure that you still had to pay cash at the bar. Drinks were not free. So now I doubly don’t believe him, because I don’t know that he had cash money in his pocket. [laughs]

Q: I’ll have to go back to him now. This is going to going to be a new controversy.

Gigliotti: [laughs] You don’t mean that, do you?

Q: Once the decision was made to reinstate the awards for cinematography, editing, live action short and hairstyling and makeup from the commercial breaks back into the show, how much had to change and how logistically difficult was that to pull off so late in the game?

Weiss: Let me start by saying this: I do a lot of live shows, as you may or may not know. The run-down is never set four weeks before the show when nominations come out. And I think part of the whole art and the process of what we do on these shows is building and changing with new information and with the times.

Were some that happened this year big curveballs? Maybe. But that’s kind of part of the process of building a live show. As information is coming in and pieces change, the idea is to build as exciting and as well-flowing a show as you can, and I think we kept to that. I’m not sure it was an excessive curveball. It was a curveball.

Gigliotti: The truth is, you produce live television, you produce movies — there’s always something that comes up. You deal with it, is what it amounts to.

Q: Every year, the Oscars are scrutinized incredibly closely, and there’s always a lot of armchair-quarterbacking, but given everything that’s led up to this particular show, there may be even more than usual. How are you going to measure the show’s success? Is it about the ratings at the end of the day or is it about something bigger and less quantifiable?

Weiss: Look, we are here to do the best show we possibly can, and we’re going to do that. And I think that our success is also going to come from knowing that, with the cards we were dealt, we put on the best possible product and appealed to many people. And, mostly, we honored people in 24 categories and made the night about the great year in movies.