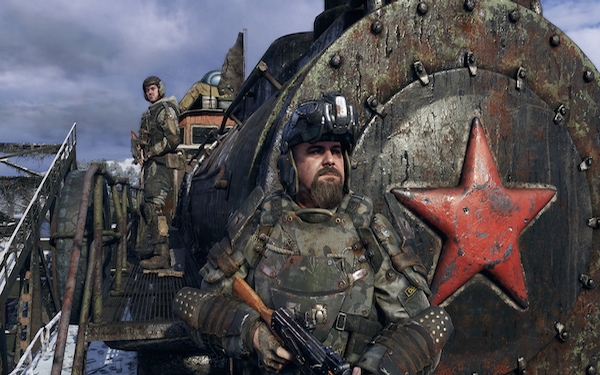 A train called the Aurora acts as a mobile base as Artyom and the other Spartans of the Order look for a new home. (Deep Silver)

Despite being a global event, the end of world usually focuses on the Western experience. Stories focus on aliens attacking the West Coast, zombies taking over Atlanta or bombs dropping on America.

Few games look at how the apocalypse affects other continents, and that’s a shame because other cultures offer fascinating perspectives on the scenario. The “Metro” series based on the Dmitry A. Glukhovsky novels of the same name is one of them. The Ukrainian studio, 4A Games, has done a brilliant job of adapting the books for video games and bringing a Russian ethos to the survival-horror genre.

Taking place after a nuclear war wipes out Russia, the “Metro” franchise focuses on survivors who built a society in the subway tunnels. In that underground realm, bullets are scarce and used as currency. Players have to be wary of treading outside because the toxic air will kill them. They have to use a hand crank charger to power devices that run out of juice.

This pushes the first-person game toward stealth mechanics as players push to preserve ammunition while they battle mutants, monsters and factions of the underground. The latest chapter, “Metro Exodus,” changes the formula. It follows Artyom, the protagonist of the previous games, who discovers a stunning secret while exploring the city ruins: There are other survivors beyond the isolated Moscow tunnels.

After commandeering a train they name the Aurora, Artyom, his wife, Anna, and several members of The Order militia set off to explore the devastated country. That takes them on a journey that mixes open world and linear stages. It’s a major change for a franchise that capitalized on tension and paranoia of a subterranean world.

During the open world portions at the Volga River, Caspian Sea and Taiga, players venture through large regions inhabited by differing factions. Artyom comes across fish-worshiping cultists, slavers and school children who grew up in the post-apocalyptic wilderness. Each has their own bizarre culture that is an anthropologist’s dream. Because players are away from the Metro, 4A Games had to adjust the gameplay to keep the survivor-horror element.

That comes in the form of scavenging. As players scout each area, they rifle through empty buildings for crafting materials that can turn into medkits, gas mask filters and ammo. They also come across upgrades for their gear, such as a motion detector, pouches for ammo and electrical charger. That creates a strategic element as weapon type and tools are often critical to the success of a mission.

If players are facing mutants who swarm Artyom, it’s better to bring a shotgun. If they’re battling bandits who attack from a roof, a sniper rifle would be preferable. If it’s a stealth mission, it’s better to wait for evening and equip night vision goggles and a gun with a silencer.

Between the open-world segments, “Metro Exodus” features linear segments that have a sense of urgency. These are tense levels charged with frenetic pacing and gunplay. They’re more reminiscent of the previous games.

What doesn’t change is how “Metro Exodus” tracks the subtle decisions players make during the campaign. It’s not just about going from point A to point B; the game evolves and changes based on how they play. Players can be ruthless and kill anyone, but that may have an impact on the survival on Artyom’s comrades. They can explore a region and discover people in need or ignore them and miss out on helpful power-ups. Keep in mind, though, the cumulative decisions have an impact on the ending of a game.

Although “Metro Exodus” does a lot to advance the series, it does have its share of bugs. It comes across as unpolished compared to its predecessors with crashes and moments that will force players to replay moments repeatedly. The fact that players only have two save slots exacerbates this flaw.

Still, the game does more right than wrong during its odyssey following Artyom. “Metro Exodus” offers a compelling vision of a post-apocalyptic world, one that’s distinctly Russian but also echoes universal themes. No matter where they come from, people can be just as horrific as the monsters that inhabit their land. The crew of the Aurora and players learn in a journey that’s uneven in parts but offers just enough good gameplay and level design elements to keep players enthralled through most of it.

Reviews
‘Call of Duty: Modern Warfare’ succeeds by going back to basics
1,029 views

Reviews
‘Fire Emblem: Three Houses’ is Nintendo at its most flirtatious
2,610 views