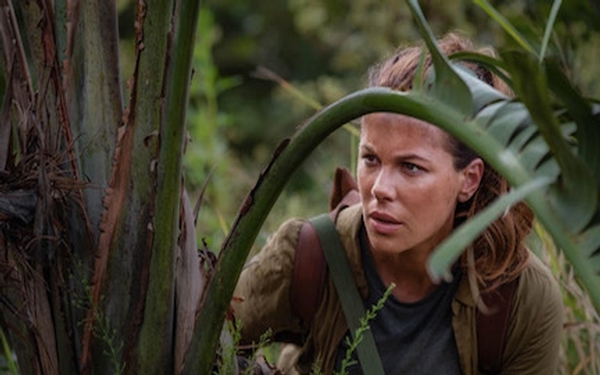 Kate Beckinsale is a woman searching the Congo for the husband she had believed dead in Amazon Prime's "The Widow." (Coco Van Oppens/IMDb/TNS)

When you strip away the distinguishing details, there are only so many stories to tell. But the similarities between two new Amazon Prime series — “The Widow,” which premieres Friday, and “White Dragon” which began streaming in early February, are worth mentioning.

Each follows an English person (a white English person, for enhanced cultural contrast) into a foreign land on the trail of a spouse — dead in one, believed to be alive in another — and a multistory maze of secrets and lies and things turning out to be Not What They Seemed.

Each gets a lot of energy from its setting, as if an episode of the late Anthony Bourdain’s “Parts Unknown” had been strained through Alfred Hitchcock or Graham Greene and stretched into a mystery miniseries.

Both are highly watchable, if occasionally confusing, old-fashioned entertainments — well-acted, energetically directed without being mannered, cinematic without being fussy. Each has an emotional intensity unusual for the genre; tragic events have lingering effects upon the characters, not to be swept aside with jokes or romance.

At eight episodes apiece, they have space to develop multiple story lines, which run together in twists and twirls toward a conclusion. And each takes care to tie up loose ends, with the somewhat inelegant effect of seeming about to end a few times before they actually do. They are perhaps too scrupulous in this regard — not every question needs an answer — but in terms of overall customer satisfaction, it is not a bad plan.

Similarly, while both series take their protagonists into worlds of violence and corruption, their point is not so much that the world is violent and corrupt, but that sometimes it isn’t. Though the series run on dark paths, each ends, brightly, on a major chord, as it were — not wholly convincing, but not unexpected, either, and not unwelcome.

(One notes with interest that “The Widow” creators Jack and Harry Williams, who earlier created the fine “The Missing,” also wrote the final episode of “White Dragon.”)

Created by Mark Denton and Jonny Stockwood, and directed throughout by Paul Andrew Williams (“Broadchurch”), “White Dragon” stars John Simm (“Life on Mars”) as Jonah Mulray, a mild-mannered London university lecturer who travels to Hong Kong after the death of his wife (Dervla Kerwin). Though he is told her death was accidental, he comes to believe that she was in fact murdered, and in the course of his self-propelled investigations — over which he becomes increasingly less mild — he discovers that she had another husband, disgraced former cop David Chen (Anthony Wong, a titan of Honk Kong cinema), and a grown daughter, Lau (Katie Leung, Cho Chang in the “Harry Potter” films). He is news to the Chens, as well.

Jonah’s dangerous path takes him through a full complement of familiar types and tropes, the cop on the take, the immoral industrialist, a Hong Kong godfather, a down-on-his-luck journalist, feckless hoods, politicians with agendas. Jonah and the rival ex-husband played by Wong, gradually form an uneasy partnership in pursuit of the truth, which will become a marginally easier one as time goes on.

But what makes “White Dragon” a (much) better than average thriller is not the particulars of its plot, but the excellence of its execution. Eben Bolter’s camera vividly translates the extraordinary look of Hong Kong, playing itself, while sets feel authentically inhabited over time, not freshly dressed for the camera. Universally intelligent performances make even minor characters interesting and hard to pin down even as they are being employed by the writers to well-defined, practical ends.

I could not tell you why it is titled “White Dragon,” other than that John Simm snorts fire wherever he goes. (You might think, “Drugs,” but it isn’t that.) The title was changed to “Strangers” for the UK, where it was broadcast over ITV last September, not inappropriate to the material, but perhaps less tempting to a person wondering what to binge next. Well, I do recommend this.

In “The Widow,” Kate Beckinsale, making a welcome return to television (after two decades of being merely a movie star), plays Georgia Wells, a woman who believes her husband had died in an African air crash until, three years later, she thinks she sees him in news footage of a riot in Kinshasa. Despite being warned against it, she heads to the Democratic Republic of Congo to track him down. (When she gets there, people will tell her to go home; she never listens.) Other threads — one involving child soldiers, another beginning when two blind people meet at a clinic in Rotterdam — will head to meet hers.

Unlike Simm’s Average Joe in Unusual Circumstances — think Cary Grant in “North By Northwest,” but shorter and less freshly pressed — Beckinsale’s Georgia is a former army captain, with training that allows her to plausibly carry on like an action hero. (Beckinsale has played them before, and handles it well.) It’s pleasurable, too, to see Charles Dance as an old friend and former intelligence officer accompanying her — the world can use a few septuagenarian swashbucklers.

Like “White Dragon,” it’s a compelling puzzle, a potato-chip show — as soon as you finish one episode, you reach for another. (Of course, Amazon does that work for you.) If “The Widow” has a problem, it’s that it is largely a story of white Westerners (including Alex Kingston as a colleague of Georgia’s husband) working out their destinies in a nonwhite, non-Western world. (“White Dragon” is more invested in its setting and Chinese characters.) If it is too busy and multifarious to be classed as a “white savior” movie — see the recent controversy over the Oscar-winning “The Green Book” — it certainly has elements of one. You will or will not find it distracting.

When: Any time, starting Friday

Rating: TV-14 (may be unsuitable for children under the age of 14)