‘Greta’ gets a boost from Isabelle Huppert’s freaky, funny performance 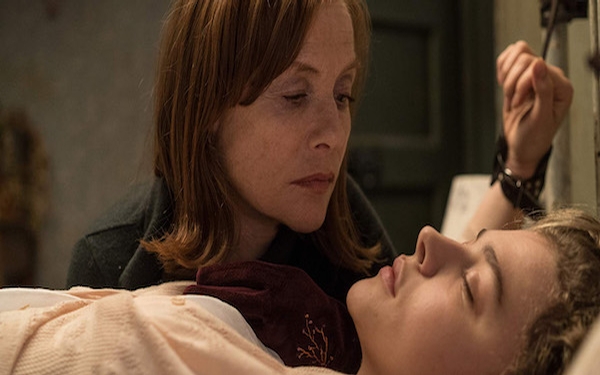 If one must be stalked by a lonely, obsessive widow who loves barbiturates and mind games, it might as well be Isabelle Huppert. That seems to be the chief takeaway from “Greta,” a sleek, derivative psychological thriller featuring this great French actress in a rare and welcome English-speaking role. Directed by the gifted but erratic Irish filmmaker Neil Jordan, the movie is thin, rote and silly but, Huppert being Huppert, it’s good for a diabolical chuckle or two.

Best known in the U.S. for her Oscar-nominated performance in “Elle,” Huppert is a master of cold-blooded nuance — she has about a hundred different flavors of ice water in her veins — and her juiciest moments here are fleeting but choice. She flips a restaurant table. She wields a syringe the way Marlene Dietrich would brandish a cigarette. At one point, she chews a piece of gum with the kind of suggestive deliberateness that briefly, happily brings the movie and its busy narrative machinations to a halt.

There’s a lot of plot in “Greta,” much of it stupid. The setup isn’t bad, though: A nice young Boston-to-New York transplant named Frances McCullen (Chloë Grace Moretz) sees a handbag on the subway and, finding an ID card inside, makes the dreadful mistake of trying to return it to its owner. She makes her way to the Brooklyn home of Greta Hideg (Huppert), who in her gratitude insists that Frances stay for a cup of coffee — and never mind those loud thumping noises, it’s just the neighbors renovating. Mm-hmm.

Frances is naive and needy: Her mother died not long ago, and Greta, who’s lost a husband, initially seems as though she might be just the friend Frances needs. But after a few pleasant outings, it takes little time for the widow’s company to turn strangely sinister and scare Frances off. Greta, however, is not one to take “non” for an answer.

Since he came to prominence years ago with the doomy noir romanticism of “Mona Lisa” and especially “The Crying Game,” Jordan has spent much of his time putting his own oddball spins on genre. He has often placed women at the center of these strange, fitfully inspired fictions, like Jodie Foster in the vigilante thriller “The Brave One,” or Gemma Arterton and Saoirse Ronan as a mother-daughter vampire duo in the recent “Byzantium.”

With “Greta,” Jordan and his cowriter, Ray Wright, seem to be nodding in the direction of ’90s freakouts like “Single White Female” and “The Hand That Rocks the Cradle,” slightly revised for the advent of cellphone technology and its myriad stalker-cam possibilities (although Frances weirdly still has a landline). Unfortunately, despite the odd hallucinatory freakout and one deliciously nasty Grand Guignol moment, neither the story nor the telling has the requisite juice to fulfill, let alone transcend, the audience’s expectations of this well-worn material.

Despite its brief 98-minute running time, the picture seems to move both too quickly and too slowly: Greta goes from friend to freak in seemingly record time, but after a few initial jolts, her campaign of terror feels maddeningly protracted and borderline inefficient. The actors do what they can to keep you watching amid so much don’t-go-in-the-basement idiocy: Moretz, coming off her fine performance in last year’s gay-conversion-therapy drama “The Miseducation of Cameron Post,” makes a touching enough innocent, while Maika Monroe (“It Follows”) adds a terrific dash of vinegar as Frances’ street-wise yoga fiend of a roommate.

Stephen Rea, a Jordan regular, turns up briefly as a dour private investigator tasked with getting to the heart of the matter. But he is predictably no match for Greta, as Huppert pushes her usual brand of poker-faced understatement to a scary, wickedly deadpan extreme. In many ways, the story has been fashioned as a wink-wink tribute to its leading lady: That Greta likes to tickle the ivories is a clear reference to Huppert’s masterful performance in Michael Haneke’s “The Piano Teacher,” while her work in Claude Chabrol’s “Merci Pour le Chocolat” might explain the character’s talent for drugging hot beverages. Without Huppert’s insinuating smiles and killer timing, “Greta” itself would be pretty weak tea.

Rating: R, for some violence and disturbing images

Movie Reviews
‘Terminator: Dark Fate’: Linda Hamilton saves the world, and a franchise is lifted out of mediocrity
1,041 views