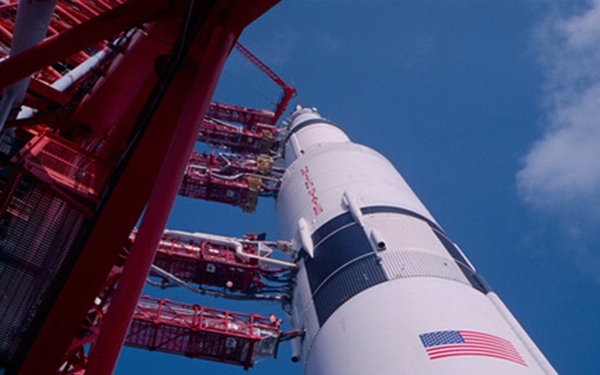 Truth may or may not be stranger than fiction, but it certainly can be more dramatically compelling. Witness “Apollo 11.”

A documentary on the mission that took astronauts Neil Armstrong, Buzz Aldrin and Michael Collins to the moon and back half a century ago, “Apollo 11” has no talking heads telling us what it all means or modern re-creations like the unemotional Ryan Gosling-starring “First Man.”

Instead, as directed by Todd Douglas Miller, “Apollo 11” relies on footage shot and audio recorded at the time, and the results, from liftoff to landing to the journey back home, are completely riveting.

“Apollo 11” succeeds as well as it does for several reasons, but a key one was the discovery in the National Archives of hours of large-format 65-millimeter color footage covering all aspects of the mission, footage that had never been seen by the public and was subsequently digitized to the highest resolution possible.

Also discovered were 11,000 hours of audio recordings from key personnel on the ground as well as the astronauts way out in space.

But just having great material does not guarantee a superior film, which is where Miller’s skill and experience come in.

In 2014, Miller directed “Dinosaur 13,” an altogether splendid documentary about the havoc the discovery of a Tyrannosaurus rex skeleton caused in the family that dug it up.

Since that Emmy-winning film also involved making the best of hundreds of hours of previously unseen footage, it was an experience that clearly helped the filmmaker when “Apollo 11” came around.

As a director, Miller has a superb eye for striking images, for showing us things that have either been forgotten or never paid attention to in the first place.

So, on the ground at Cape Canaveral, Fla., on launch day, July 16, 1969, we are treated to an unnerving shot of a huge vehicle with massive tank treads moving the formidable Saturn V rocket with the Columbia command module at its top to the launch pad.

We also get a rare look inside the suiting-up room, as the astronauts are fussed over like debutantes at a cotillion by teams of white-coated men intent on making sure their space gear fits exactly right, a scene whose combination of the everyday and the surreal is boggling.

Also filled almost exclusively with men are the control rooms at both launch site Cape Canaveral and the space center in Houston, where row after row of males wearing short-sleeve white shirts and black ties look like the members of some strange monastic order.

There is also panoramic photography, as sharp and clear as being there in its vivid color, of some of the million individuals who came to Florida to watch the launch, including celebrities ranging from Johnny Carson to science fiction legend Isaac Asimov.

“Apollo 11” of course includes the more familiar shots of Armstrong and Aldrin on the moon’s surface, but, shown in real time with the benefit of digital sharpness and without narration aside from the men’s comments, they have unexpected “You Are There” impact.

It’s great to hear, throughout the film, the astronauts’ relaxed and amusing comments, such as Aldrin’s laconic, “Well, if I stop breathing, I’ll be sure to let you know,” almost personifying Tom Wolfe’s concept of “The Right Stuff.”

One of the unexpected but welcome things “Apollo 11” accomplishes is restoring a sense of how insanely complex the lunar mission was, and how audacious. How did people even have the nerve to dream a dream this big, not to mention the determination and skill to pull it off without a hitch? That truly seems like a long time ago in a galaxy far, far away.