How ‘Climax’ pulled off that unforgettable dance sequence 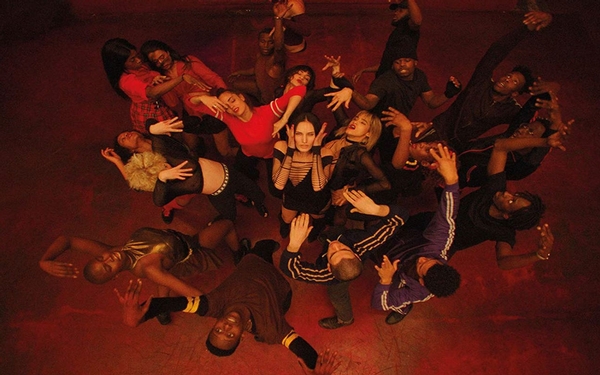 Director Gaspar Noé’s “Climax” is a disorienting trip into a dance madhouse. Set in 1996, the film chronicles a dance troupe’s descent into paranoia, carnality and violence after drinking sangria spiked with LSD at an abandoned Paris school.

In the film’s opening number, the group of street dancers practices a five-minute routine before celebrating with the ill-fated drink. As Cerrone’s electro-disco track “Supernature” blasts, the cast of about 20 diverse performers struts across the gymnasium floor as a dancer helicopters his arms at breakneck speed.

Shot in a single-take, the dance routine is more than just choreographed steps. It shows off the dancers’ individual styles which include voguing, an improvisational dance form that mixes exaggerated model poses with mime-like movement; waacking, characterized by rapid arm movements; and krumping, an aggressive and emotional dance born on the streets of South L.A.

The opening number is a bit rough around the edges, but that’s intentional, said the film’s choreographer, Nina McNeely.

“It’s fully choreographed and fully realized but definitely unrefined,” McNeely said. “If it would have been super-clean and super-perfect, it would’ve felt like a musical. You wouldn’t have expected these dancers to go where they go later in the film.”

In late 2017, Noé (“Love,” “Enter the Void”) was invited to a vogue ball in Paris, a dance competition and safe haven for the LGBTQ community. “The energy was so crazy,” Noé said. “I thought, I should start doing a documentary about dancers.”

The director, known for his extremely violent and sexually explicit films, was also introduced to other styles of street dance and began plucking dancers from competitions and YouTube videos for his project. Noé’s idea for the film also morphed into making a part documentary, part narrative.

Asking actors to play dancers would’ve been “boring and awkward,” Noé said. Instead, he chose to “cast the best dancers — we’ll ask the dancers to act.” After shooting for 15 days in February 2018, the film premiered at the Cannes Film Festival that May. A24 acquired the film for U.S. release, which opened in theaters March 1.

Sofia Boutella (“The Mummy,” “Hotel Artemis”) plays Selva, the troupe’s lead dancer. She’s one of the few professional actors in “Climax,” but she began her career as a street dancer. Boutella decided to end her five-year break from dance after receiving an Instagram message from Noé. “All he said was, ‘I just want to make a movie with dancers, they’re spiked with LSD.’ I said, ‘What else?’; he said, ‘I don’t know, we’ll see.’”

Boutella convinced Noé that he would need a choreographer and introduced the director to McNeely, who is based in L.A. and known for her unique style of movement fusing contemporary, hip-hop and Eastern styles of dance.

For the film’s opening routine, the cast only rehearsed for about three days. And because most street dance focuses on solos, not group movement, many of the dancers were not used to learning choreography.

“Working with the street dancers was interesting but it also made me quickly realize that the only thing they could do synchronized was walk,” McNeely said. “But that showed a lot of their personality when they walked and it looked really powerful.”

Boutella recalled her own dance experiences, working with a street dance company in Paris. “It was that same sort of vibe where it’s all organic and spontaneous,” she said.

Each day of shooting began with a warm-up battle, with the dancers showing off their best moves for one another to build energy and camaraderie on set. “The first time they were battling … Gaspar came up and whispered in my ear, ‘I like the ones that are the most savage.’” McNeely said. “I think if I would’ve had a bunch of trained dancers, they probably wouldn’t have had that sort of edge or that sort of energy and probably not that sort of interaction on camera with each other.”

And with only a five-page treatment to work from, most of the film was improvised over the 15-day shoot.

“Every day we rehearsed, we had no idea what we were going to do at all,” Boutella said. After watching what was done the previous day, the cast would rehearse for a few hours, then shoot somewhere between 14 and 17 takes for a 10-minute scene.

To both Noé’s and McNeely’s surprise, none of the dancers said they had experience with psychedelic drugs. So for reference, Noé put together a video of people on extreme drugs like flakka, a synthetic stimulant known for causing bizarre and uncontrollable behavior. McNeely also showed clips of butoh, an expressive form of Japanese dance theater to help the cast get into character.

The film’s second act follows the dancers as they trip out and become increasingly more hysterical and vicious. The camera, operated entirely by Noé, is like another dancer in the group, erratically following each person experiencing their drug-induced psychosis.

Boutella’s own “climax” was inspired by the unsettling freakout moment by actress Isabelle Adjani in the 1981 French-German horror film “Possession.” “I always thought and wondered if [Adjani] worked with a contemporary choreographer because what she did always reminded me of dancing,” Boutella said.

Boutella collaborated with McNeely to choreograph her eight-minute climax scene, in which the actress stumbles along a corridor, flinging herself to the ground and banging against walls, in both fits of laughter and bloodcurdling screams.

“Climax’s” anxiety-inducing, near-final scene shows the dancers’ complete devolution. To the pounding bass line of Giorgio Moroder’s “Utopia,” the camera also trips out, flashing rapidly between dancers having sex, a contortionist seemingly breaking his bones, and others violently convulsing on the ground.

Dance is terrifying, McNeely said. “Just to see someone bending their body or making their body move super-fast or super-slow, there’s something kind of disturbing about it in general.”

McNeely also noted the importance of using real dancers in film, referring to the 2018 dance-horror “Suspiria,” where lead actress Dakota Johnson was not a professional dancer.

“I think there’s something really powerful about Gaspar using all of those dancers as actors,” she said. “Once more dance movies like this come out with real dancers, the harder it’s going to be to hold it up against these other movies with non-dancers.”

Interviews
James Bond producer: 007 ‘can be of any color’ but never a woman
1,712 views