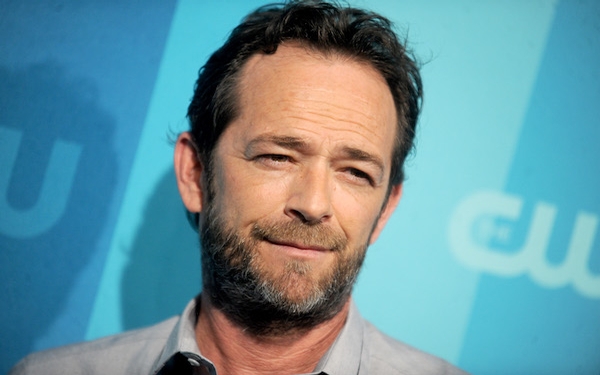 Actor Luke Perry died Monday at the age of 52 days after suffering a stroke. While Perry was best known for his role as Dylan McKay on “Beverly Hills, 90210,” he was enjoying a new wave of popularity thanks to another popular high school drama: the CW’s “Riverdale.”

On the series, which is in its third season, Perry starred not as one of the high school students, but as one of their parents. He played construction worker Fred Andrews, the single father of the show’s chief protagonist Archive Andrews (KJ Apa).

While promoting the series at the Los Angeles Times’ Comic-Con studio in July 2016, Perry joked about the difference between his latest series and his breakthrough drama: “It has no ZIP code,” he told The Times during a group video interview.

That was the only difference. In stark contrast to the sun-kissed scenes of “Beverly Hills, 90210,” “Riverdale” boasted a darker, more noir tone. “It’s special,” Perry said. “I’ve shot a lot of stuff in Vancouver [Canada] where we shoot and these guys [pilot director Lee Krieger and director of photography David Lanzenberg] have made it look like in a way that I’ve never seen it before. It’s really remarkable.”

That also applied to the personal lives of the main characters — which are pulled from Archie Comics.

“It’s interesting that because we’re not that happy all-American family. Archie’s parents are separated and he lives with his dad,” Perry said. “We’re the working-class side of Riverdale. We’re the blue-collar guys: Andrews Construction. I’m a construction worker and it’s me and my boy and we’re going to figure it out together. And that’s kind of neat because, traditionally in the comics, Archie came from a really happy family, everything was always great and apple pie in the window and all that stuff and it ain’t like that here.”