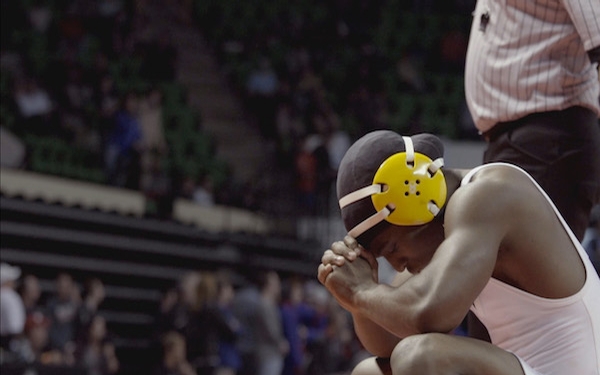 Just as sports mirror society, so do the best sports films not only take us inside games and those who play them but also provide insight into our world and how it works. “Wrestle,” a superb sports documentary, does exactly that.

As directed by Suzannah Herbert and co-directed by Lauren Belfer, this story of a Huntsville, Ala., high school wrestling team so expertly balances those two points of view, the athletic and the cultural, that comparisons to Steve James’ landmark “Hoop Dreams” are inevitable and legitimate.

One reason “Wrestle” is so effective is that director Herbert and cinematographer Sinisa Kukic decided to move to Huntsville for the duration of the shoot.

What resulted was not only 650 hours of footage but also the benefit of countless additional time spent just hanging out with the protagonists. As a result, the director notes, “When intense, hard things actually did happen, it wasn’t weird or uncomfortable for us to be there.”

Though football is much the dominant athletic activity in Alabama, having intense, demanding wrestling at the center of things pays dividends of its own.

Often not as celebrated as other sports, wrestling has had its share of strong dramatic features focusing on it, “Foxcatcher” and “Win Win” being the best among them.

One of the hooks of “Wrestle” is that Huntsville’s J.O. Johnson High, in one of the city’s poorest areas and a fixture on the state’s failing schools list, is the last place you would expect to find a competitive wrestling team.

It exists because its 28-year-old coach, Chris Scribner, who taught social studies there, is a sincere and passionate believer that fighting to excel in sports, “grinding every day,” increases an individual’s chances of both winning tournaments and having a successful life.

“It’s not about you, it’s about the opportunity you’ve been given to be great,” he says in the pep talk, one of many he gives, that opens the film.

Set in the 15 weeks between the start of the season and the state finals, “Wrestle” focuses on four of the strongest members of the team, empathetically examining their personal lives and the formidable challenges that each of them faces. These include:

––Jailen: Quiet, even-keeled and self-motivated, he hasn’t seen his mother since he was 2, his father who is in and out of prison, and lives with his grandfather.

––Jamario: Determined to make a success of his life, he worries his mother and his coach because of the intensity of his involvement with his girlfriend.

––Jaquan: Though a weakness for burritos makes it hard for him to make weight, his passion for this unlikely sport confounds his mother, who says, “I got a white son, a white boy inside a black boy’s body.”

––Teague: The only white athlete of the four profiled, he has attention-deficit difficulties but increasingly avoids his medications in favor of self-medicating with recreational drugs.

In addition to the rigors of this very demanding sport, these young men have to cope with living in poor, single-parent households where a sense of normality is not a given, and where personal situations may be beyond their capacity to handle.

We also see, in vignettes that are all the more potent for being delicately handled, how what comes off very much like racial profiling affects these kids in terms of their interactions with local police.

Even their coach, who reveals that his own high school years were more than problematic, legitimately worries that his charges will not get the repeated chances to overcome bad choices that he himself was given.

By the time the Alabama state high school championships roll around, we know these four wrestlers intimately and we’ve come to care enough to want nothing but the best for each of them, not only in the tournament but in their lives. But this is truth, not fiction, and that’s not something that’s guaranteed.