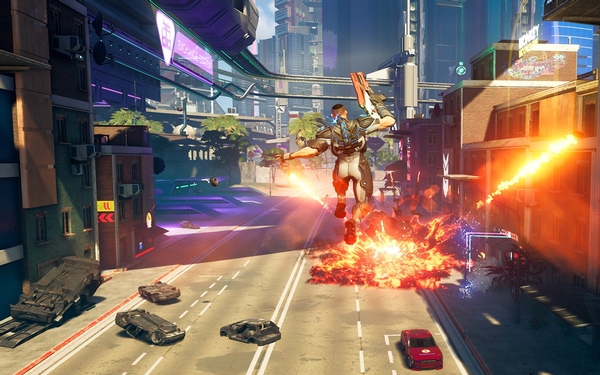 Players can expect a lot of mayhem in "Crackdown 3." (Microsoft/TNS)

Not every video game should strive to be a sprawling epic. Sometimes it’s OK for a release to be simple and fun.

“Crackdown 3” falls into this category. The sequel won’t win many awards for its visuals or storytelling, but the developers at Sumo Digital know what the project should be, and they drive that point home through a manageable campaign.

The move comes almost as counterpoint to the current state of open-world games, which have become bloated with content. Compared with titles such as “Assassin’s Creed Odyssey” and “Red Dead Redemption 2,” “Crackdown 3” is refreshingly direct and easy to navigate.

It follows The Agency as it tries to apprehend Elizabeth Niemand and break up her company, TerraNova. The conglomerate is linked to a series of attacks on the world’s cities, and agents are sent to the firm’s headquarters on the artificial-island city of New Providence. As they fly toward it, the squad led by Commander Jaxson (Terry Crews) is attacked and the agents are incinerated.

A young woman named Echo helps the surviving crew member — players get to choose which one — by regenerating the super-soldier’s body. Together, they must destroy TerraNova’s infrastructure to take down Niemand and free the labor force on the island.

The narrative follows the same formula as previous games. The agent will have to cause mayhem and take down sites linked to minibosses around to the world. Those underlings are in turn linked to Niemand’s lieutenants under TerraNova’s security, logistics and industry wings. Players will have to defeat them all in order to make the final assault on Niemand’s tower easier.

Technically, players can speed run through “Crackdown 3” by attacking Niemand early, but it’s advisable to methodically eliminate TerraNova’s branches before attacking the source. The major reason for this is the progression, which is what makes the “Crackdown” series so distinct. Players start off weak after the agent is resurrected, but as they battle TerraNova’s minions, collect agility orbs and do side-quests, they grow stronger.

In the beginning, a foot race event across rooftops may seem impossible, but if players collect agility orbs, they’ll sprint faster, and earn a double jump and an air dash. That makes the challenge easier. The same goes for strength. Players’ punches won’t deal much damage at first, but as they toss debris at foes and throw themselves into brawls, they earn power orbs that boost their strength. It unlocks the ability to lift bigger objects and do moves such as a ground slam.

It’s this progression that is part of the magic of “Crackdown 3.” The game forces players to grind out levels, but Sumo Digital does it in a way that’s addictive and fun. Players don’t have to think or suss out puzzles. They just have to react to the visceral action on the screen and leap to far away orbs atop rooftops. The gameplay taps into a primal Pavlovian response, rewarding players with an enjoyable power fantasy in exchange for collecting orbs and fighting.

It’s a dated concept, but one that “Crackdown 3” executes well, thanks partly to a smart world design that accentuates the agent’s growing powers. New Providence is built in a circle with a wide array of buildings on the periphery, but as players venture toward the center tower, the freeways and buildings soar to give the world an extreme sense of verticality. It’s the perfect playground to show off a triple jump or close-quarter combat against a troop of thugs.

“Crackdown 3’s” online play is serviceable. Co-op adds more mayhem to the world, but it doesn’t drastically improve the experience. Meanwhile, the online competitive mode called Wrecking Zone offers an innovative twist to combat with destructible environments, but the gameplay doesn’t mesh well. The look and the feel of the gunplay is primitive as players dart about too quickly to make combat satisfying.

Although “Crackdown 3” is far from perfect, it is fun, and sometimes that means more than coding excellence or mind-blowing graphics. When the foundation of a game is as enjoyable as this, it’s something that doesn’t need the cutting-edge visuals. The game itself can stand the test of time, and it can continue to be fun long after its day in the sun.

Reviews
‘Animal Crossing: New Horizons’ is about sharing and annoying your loved ones
109 views

Reviews
‘Call of Duty: Modern Warfare’ succeeds by going back to basics
1,145 views