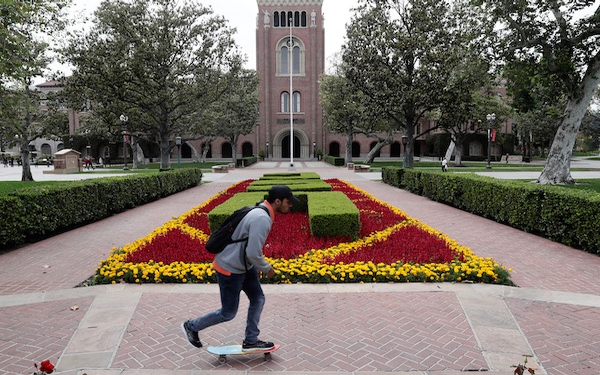 The USC campus and the scene outside Bovard Hall. A USC student who is the son of an Oakland city councilwoman was shot and killed in an apparent robbery attempt about a mile from the campus.

A University of Southern California student who is the son of an Oakland city councilwoman was shot and killed in an apparent robbery attempt about a mile from the campus early Sunday, officials said.

The victim was first identified by campus media as Victor McElhaney, who was studying at USC’s Thornton School of Music, USC Annenberg Media reported on its Twitter page.

Three or four men in their 20s approached the victim at the corner of Maple Avenue and Adams Boulevard shortly after midnight in what appeared to be a robbery attempt, said Officer Mike Lopez of the Los Angeles Police Department. The victim was shot and the men fled in a vehicle, police said.

The victim was in critical condition when he was taken to a hospital, where he died, Lopez said. McElhaney was pronounced dead at 11 a.m. Sunday, Annenberg Media reported.

It was unclear if anything was taken during the robbery.

No arrests had been made in connection with the shooting as of Sunday afternoon.

McElhaney transferred to USC from Cal State East Bay in the fall of 2017, according to USC Annenberg Media. The jazz studies major was an active member of USC’s Center for Black Cultural and Student Affairs.

Before moving to Los Angeles, McElhaney was an instructor at Oakland Public Conservatory of Music, Annenberg Media reported.

“He believed in the power of music to touch lives, to heal, and to bring hope,” USC interim President Wanda Austin wrote in a letter to students and faculty. “Victor’s loss will affect all of the faculty and students who knew him.”

Grief counseling will be available for students through the USC health center, campus media said.

USC officials have struggled in recent years with violent crime linked to the university.

On Friday, 22-year-old Alberto Ochoa was sentenced to life in prison in connection with the 2014 beating death of a USC graduate student from China. The student, 24-year-old Xinran Ji, was walking home from a study group near the campus when Ochoa and three others robbed and attacked him. Prosecutors said Ochoa, the fourth and final person sentenced in the murder, hit Ji with a bat.

Ji’s death followed the killing of two Chinese graduate students in 2012 during a botched robbery near campus. Six months later, a man fired gunshots in the middle of campus outside a Halloween party and four people were injured. None were USC students.

USC improved security after those incidents and added unarmed “ambassadors” in off-campus neighborhoods.