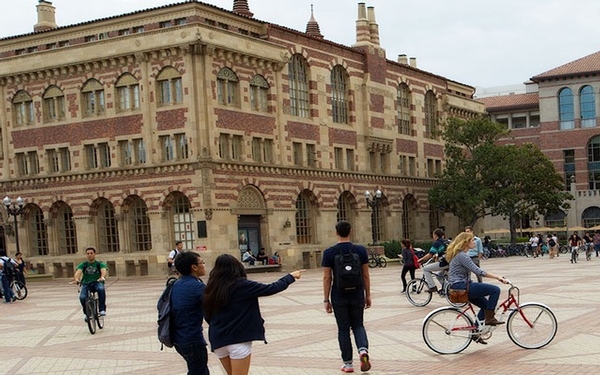 When Alinzia Davenport recalls her godbrother as a little boy, a vivid image comes to mind: a tiny Victor McElhaney in the middle of a drum circle led by older men, keeping up with the beat on his bongos.

“I just knew one day he was going to be a famous old man and we’d be going to his concerts,” Davenport said.

McElhaney devoted most of his life to the intersection of community and music. The 21-year-old son of Oakland Councilwoman Lynette Gibson McElhaney began playing drums before he could read. By the time he moved to Los Angeles in the fall of 2017 to study jazz at the University of Southern California, he had made his mark on Oakland as a mentor to other young performers and an advocate for black lives, women and gun control.

For his friends and family, then, there is devastating irony in the way McElhaney died.

At around 12:30 a.m. Sunday, McElhaney and eight friends walked from a nearby home to a strip-mall liquor store at Maple Avenue and Adams Boulevard, about a mile and a half from USC, said Los Angeles Police Capt. Billy Hayes, who oversees the Robbery Homicide Division. After buying booze, the group was approached in the parking lot by three or four men. The men attempted to mug the group, and McElhaney was shot likely after objecting to the robbery, Hayes said. The suspects fled in a car. No one else was hurt.

McElhaney was taken to the hospital in critical condition and pronounced dead at 11 a.m. Sunday. No arrests had been made in connection with the shooting as of Monday afternoon.

Those close to McElhaney described him as a critical thinker who thrived off making people smile, and a goofy and animated humanitarian. He was known for his big hugs and an intense love of percussion.

More than anything, he believed in the power of music to bring people together.

“He thought it could heal the world,” Davenport said.

McElhaney was 11 years old when he started studying at the Oakland Public Conservatory of Music. Even at that young age, he displayed a deep passion for West African drumming, said Angela Wellman, the conservatory’s founding director.

He was soon a fixture at the conservatory, studying music after school, attending its summer academy and playing timbales on stage at Oakland’s Art and Soul Music festival as part of the Frederick Douglass Youth Ensemble. He absorbed wisdom from the elders in Oakland’s African American community and became a teen mentor to younger kids at the conservatory, Wellman said.

McElhaney had a deep understanding of the historical significance of being an African American who played jazz, Wellman said, and “the importance and the depth of the rhythmic impulse of the music and where that comes from.”

“He represented the promise we hold for all our youth, particularly for our black youth,” she said.

Wellman advised a teenage McElhaney to head to the East Coast for college, but he wanted to stay close to home. He attended Cal State East Bay before transferring to USC, where he was an active member of the Center for Black Cultural and Student Affairs.

McElhaney made an impression on his classmates at USC’s Thornton School of Music. Athena Sferas, a 19-year-old sophomore, took a course with McElhaney in the fall that delved into how music and art have influenced history.

It was one of those large, introductory discussion classes where most people were hesitant to contribute, Sferas said. But McElhaney wasn’t afraid to politely challenge students whose views he didn’t agree with.

“As a black student, he felt there were voices throughout history that haven’t been heard,” Sferas said. “He wanted to make sure black narratives weren’t left out.”

McElhaney’s death comes just a few years after his family lost another loved one, 17-year-old Torian Hughes, to gun violence. Torian, whom McElhaney’s parents helped to raise, was shot and killed during a robbery in West Oakland in 2015.

The death broke McElhaney’s heart, said Azariah Cole-Shephard, a 20-year-old Oakland poet who knew McElhaney since preschool. After the tragedy, she said, McElhaney would often initiate conversations about gun violence in person and on social media. He was his mom’s biggest cheerleader as she helped create the city’s Department of Violence Prevention and led an effort to preserve Measure Z, a public safety measure that funds investment in community policing and violent crime prevention strategies.

“I know that if this wasn’t him and it was someone else, he would have his arms around each and every one of his family members, letting them know that it would be OK,” Davenport said of the shooting. “He would want his community to rally together against gun violence.”

At McElhaney’s farewell party just before he left for USC, the guest of honor asked Cole-Shephard to perform her poem “For the Black Men My Love Cannot Protect.” She recited lines that mourned the lives of young black men cut short by gunfire.

“We turned around and lost him to the same thing,” Cole-Shephard said. “It just goes to show that no matter how much you love somebody, you can’t protect them from the bullet that comes their way when you’re not physically present.”

In a statement Sunday night, Councilwoman McElhaney — whose council district covers West Oakland, the city’s busy port and the area north of downtown — said her son’s death represents the “beginning of a new chapter in this reoccurring circle of violence.”

“I miss my baby,” she wrote. “Please keep me, my family, and all of my son’s friends in your thoughts and prayers.”

While crime has steadily trended downward during the last 15 years in the area around USC known as University Park and in its eastern neighbor the Old Historic South Central, they remain among the city’s most dangerous neighborhoods.

On Friday, 22-year-old Alberto Ochoa was sentenced to life in prison in connection with the 2014 beating death of a USC graduate student. Xinran Ji, 24, was walking home from a study group near the campus when Ochoa and three others robbed and attacked him with a bat.

Ji’s death followed the killing of two graduate students in 2012 during a botched robbery near campus. Six months later, a man fired gunshots in the middle of campus outside a Halloween party and four people were injured. None were USC students.

LAPD Capt. Lee Sands noted that McElhaney was shot outside the area patrolled by the division that handles USC Southwest, and beyond USC Department of Public Safety boundaries.

USC has built a network of security cameras, license plates readers on poles and mobile sentry posts that extend into the neighborhoods beyond the campus. It was a license plate reader on a pole that allowed LAPD homicide detectives to identify the Chinese students killed in 2012.

Cole-Shephard said it is hard to imagine McElhaney losing his life during a robbery. If someone had asked McElhaney to give up what he had, she said, he would do it without hesitation.

“He never valued stuff more than he valued life,” she said.