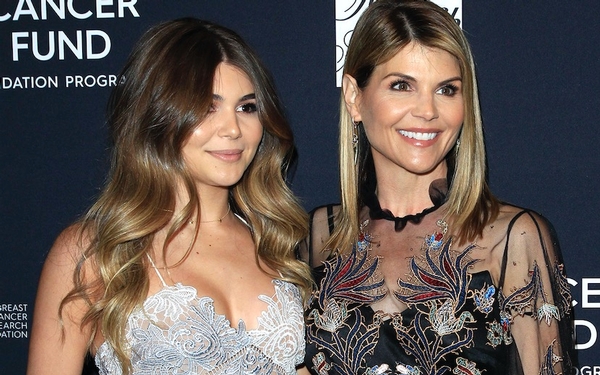 Lori Loughlin’s daughter entered college with a degree of indifference, despite the extra strings her parents allegedly pulled to get her there.

“The Full House” star’s daughter, who goes by Olivia Jade on her YouTube channel, shrugged off her upcoming college education during a question-and-answer video shared to her page back in August 2018.

In the clip she discussed how she would be required to jet off to Fiji during her first week of classes and then later to New York for engagements to build her social media career. The 19-year-old influencer admitted that it would be a challenge to balance both her online life and her college studies, but was clear on what her priorities were.

“I don’t know how much of school I’m going to attend, but I’m going to go in and talk to my deans and everyone and hope that I can try to balance it all,” she told her viewers. “But I do want the experience of game days, paryting — I don’t really care about school, as you guys all know.”

The comments sparked immediate backlash from some fans, who were quick to hit out at the YouTuber in the comments section: “Wow I wish I could go to school just for the experience and not care about my education to earn a living and waste your parents money.”

Another annoyed commenter added: “Really sucks how someone who is only going to college for ‘partying’ literally stole someone’s spot who legitimately wanted an education and probably studied very hard to get an acceptance.”

Amid the fierce criticism, Olivia Jade posted another video to apologize for her comments about college.

“I said something super ignorant and stupid basically. And it totally came out that I’m ungrateful for college — I’m going to a really nice school,” she says. “And it just kind of made it seem like I don’t care, I just want to brush it off. I’m just gonna be successful at YouTube and not have to worry about school.”

She continued: “I’m really disappointed in myself. I didn’t mean it that way. I’m sorry for anyone I offended by saying that. I know it’s a privilege and blessing and I’m really grateful.”

Despite her YouTube mea culpa, Olivia took to Twitter just last month to again brush off higher education in favor of her social media career.

“YouTube will always be my #1 passion. I promise I’d way rather be filming 24/7 than sitting in six hours of classes straight but an education is also super important to me so thank u for your patience and letting me figure out time management,” she wrote.

Olivia Jade’s parents on Tuesday were listed among dozens who have been charged for allegedly participating in a $25 million college entrance exam cheating scheme. “Desperate Housewives” actress Felicity Huffman was also indicted alongside Loughlin in the widespread scam, which additionally implicated athletic coaches, exam administrators and other parents.

The affected schools include Yale, Stanford, Georgetown, Wake Forest and the University of Southern California, where both Olivia Jade and her sister attend.

Prosecutors said Loughlin and her fashion designer husband, Mossimo Giannulli, paid $500,000 in bribes to have their daughters listed as potential recruits for the USC crew team — despite the fact that they do not participate in the sport — to boost the likelihood of their admittance.

Andrew Lelling, U.S. attorney for the District of Massachusetts, said in a news conference Tuesday that families paid a combined $25 million, mostly funneled through charitable accounts, to bribe coaches and university administrators between 2011 and 2018.

Loughlin and her husband are both facing charges of conspiracy to commit mail fraud and honest services mail fraud.