Breaking barriers is nothing new for USC’s acting chief 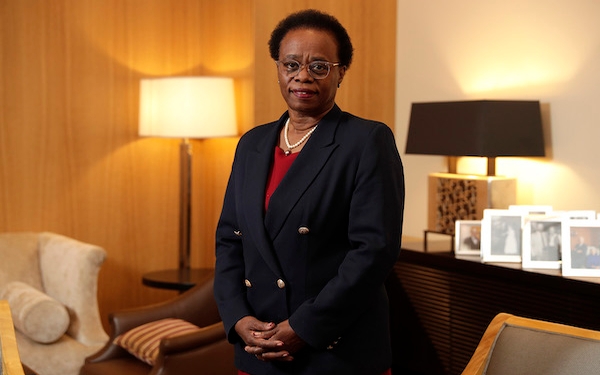 Dr. Wanda Austin, 64, was appointed interim president of USC in August — the first woman to lead the university and the first person of color. (Irfan Khan/Los Angeles Times/TNS)

In the Bronx, Wanda Pompey occupied two worlds: the tenements and public housing projects where she lived and the white schools her mother pushed her to attend.

Teachers paid scant attention to her and the few other black students. But one day in seventh grade, her math teacher, Mr. Cohen, had the class do a difficult algebra problem.

When he handed back the papers, he said, loud enough for the class to hear, “Hey, you’re good at math. Don’t let anyone tell you you’re not.”

His praise inspired her. She doubled down on math, skipped eighth grade and was accepted into the elite Bronx High School of Science.

Her brilliance at math — and later engineering — drove her through exclusive schools in New York and Pennsylvania to male-dominated defense giants in Southern California.

After she married, Wanda Austin joined Aerospace Corp. in El Segundo in 1979 and thrived. In the final eight years of her career, she ran the $950 million company — a nonprofit brain trust tasked with developing and overseeing the nation’s missiles and satellite systems.

Her reputation as a clear-headed, empathetic leader pulled her out of retirement last year for a new challenge: Austin, 64, was appointed interim president of the University of Southern California in August — the first woman to lead the university and the first person of color.

Her mandate was decidedly nontechnical: disrupt the clubby atmosphere of one of Los Angeles’ oldest and richest institutions.

Austin, a USC board trustee, replaced former President C.L. Max Nikias, who resigned amid an outcry by students, parents and faculty over his administration’s handling of sexual misconduct claims.

The Los Angeles Times revealed in May that the university allowed the longtime campus gynecologist to treat students for 27 years despite multiple complaints that he inappropriately touched patients and made sexual remarks during exams. This followed earlier stories in the newspaper revealing that the former medical school dean, Dr. Carmen A. Puliafito, was using illegal drugs such as crystal methamphetamine and partying with drug dealers and prostitutes in hotels and even his office.

Austin did not walk gingerly into her new role.

Within three months, she informed the popular dean of USC’s Marshall School of Business, James Ellis, that he would be removed in the spring because of the way he addressed sexual harassment and gender discrimination complaints filed against faculty and staff. The move set off a revolt of wealthy donors and trustees close to Ellis.

“Jim’s not going quietly and we’re not going down quietly,” said Lloyd Greif, chief executive of his own investment firm, who has donated more than $5 million to the business school.

Pasadena billionaire Ming Hsieh, a trustee who has donated more than $85 million, hired a Century City litigator to advocate for Ellis to the board.

Austin laid out her case at the December meeting of the trustees, and the board overwhelmingly backed her decision.

She also set out to improve management oversight and transparency.

“It starts with recognizing and owning that we need to have a culture change,” she said, “that we need to make sure that there is a way for people — students, staff, faculty, alums, parents — to have their voices heard and know the administration is listening and interested.”

She created the Office of Professionalism and Ethics to review and investigate complaints from student and faculty throughout the university. “If you see something, you shouldn’t have to take a course to know who to call,” she said.

Austin can make hard decisions that might anger fundraisers in part because she doesn’t want to keep the job. She looks forward to returning to retirement. But while the future gives her room to act, her past is what guides her.

The Pompeys were poor, but by no means miserable. At the end of the month, meat might vanish from the dinner table, but they still had biscuits and grits.

Austin said her father Murry’s barber shop was the town square of their Morrisania neighborhood, so he had spies everywhere. “Being the daughter of a barber, people would come and say, ‘Aren’t you Mr. Murry’s daughter,’” she said. “There was no hiding.”

Her parents were strict and loving and — even though her dad had to quit school in the eighth grade to work — saw excelling in school as the way she and her little sister would succeed in life. Her mother, Helen, sought to widen her world, taking her to violin lessons, Rockefeller Plaza, Broadway plays, the Apollo Theater, Girl Scout camping trips. Her father inculcated in her the notion that she could accomplish anything if she worked hard at it.

In third grade, she was sent by her mother to a school in a white neighborhood. “You go to school, celebrate the Jewish holidays, learn the dreidel song,” Austin said. “And then you come home and you have kids who speak in broken English, have no interest in going to school, who are doing drugs. You have to be successful in both places.”

She recalls teachers practically ignoring the school’s few black students. “They just allowed us to come and hoped we didn’t destroy the place,” Austin said.

Mr. Cohen’s endorsement in seventh grade launched her into the Bronx High School of Science.

“It was a phenomenal education, actual labs,” she said. “I took drafting. You just learn about things you never would expect to learn in a public high school in New York City.”

With the exception of an English teacher who told her to just sit in the back and be quiet, she found herself in an environment where she was expected to go not just to college, but to a top one.

She attended Franklin & Marshall College in the Amish country of Pennsylvania. Of the 500 students, five were black women. She married Wade Austin, a math major from the historically black college Lincoln University, in 1977 as she earned master’s degrees in math and systems engineering at the University of Pittsburgh. The couple moved west that year when she took a job at Rockwell International in Anaheim.

She jumped to Aerospace Corp. in El Segundo in 1979.

“They had a women’s group … that was to nurture and network with the women across the company and to give feedback to the company,” Austin said. “Way ahead of its time.”

Aerospace is connected by a bridge over El Segundo Boulevard to Los Angeles Air Force Base, headquarters of the Space and Missile Systems Center, and is surrounded by space tech firms including Northrop Grumman, Boeing and — now — SpaceX. The zone is the nation’s hub for satellite and missile development.

One of Austin’s first assignments was to visit the storied “Blue Cube” at the Air Force Satellite Control Center Facility in Sunnyvale outside San Jose.

Austin sat down with the team of engineers and military officers in the operations room — mostly men in crew cuts. Every time a military GPS satellite passed over, the team scrambled to check its positioning, navigation, communications and power supply, and decide what data to send it. If they needed to have the satellite fire a booster to change course, fix a camera or power down, they had three minutes before it was out of their window.

Her job was to find ways to automate this process. The team was all white, but Austin felt at home. There was no room for racial or gender bias in math.

“First of all, you’re welcomed in as an equal. You’re doing something phenomenal,” Austin said. “Today GPS is a household word. In 1981 it wasn’t.”

She raised two boys and got a doctorate at USC in engineering on the side.

When William Bauhaus took over as chief executive of Aerospace in 2000, Austin was overseeing military satellite communications. The company had been marginalized in a Defense Department effort to cut costs and streamline contracting. But three military satellite launch failures in two years, costing billions and leaving gaps in America’s reconnaissance, pushed the Air Force to reaffirm its relationship with Aerospace. The company now took responsibility for mission success or failure.

Bauhaus sent Austin to Virginia to expand the company’s role with the National Reconnaissance Office — an agency at the time whose very existence was classified.

“She was very good at gaining people’s trust,” he said.

When Bauhaus announced his retirement, the board of directors conducted a national search to replace him and concluded Austin was the best candidate for the job. She took the helm in January 2008.

“You always got the sense she was as natural as can be in that position,” said Malissia Clinton, the general counsel for Aerospace. “She’s very grounded. Wanda doesn’t have a chip on her shoulder.”

Clinton said Austin had to lay off 300 people early in her tenure, but did it fairly and “the employee base was very loyal to her.”

Austin continued Bauhaus’ record of no launch failures. She tried to bring more women in the upper ranks. She said they were often underrepresented, not based on qualifications, but their own lack of confidence in their qualifications. “I’d put out a job posting that involved five skills, and men with one skill would apply, and women with 4.9 of those skills would say, ‘I’m not qualified,’” she said.

Austin retired in 2016 because she wanted to travel around the world, spend time with grandchildren and encourage more students — boys and girls of any color — to pursue math and science. She founded a scholarship to award up to $10,000 a year to undergraduate students studying science, technology, engineering and math, which has so far been awarded to three men and women of color.

“Those four subjects will enable students to define and shape our future and change the world,” she said.

After blazing her own trail from the Bronx projects, she’s going back to widen the path.