Rick Singer’s nonprofit was supposed to help poor kids. But elite colleges got most of its grants 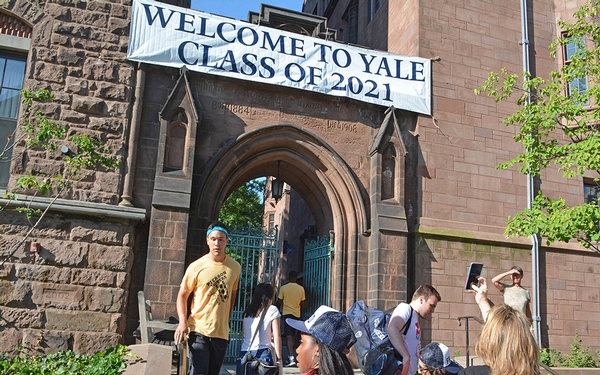 William Rick Singer touted his charity as a way to open doors for disadvantaged students who grew up surrounded by gang violence.

The Key Worldwide Foundation’s website says it funds dental care for needy Cambodians, after-school programs for children in 20 cities across the United States and life coaching to underprivileged girls in Los Angeles.

But federal tax records reviewed by the Los Angeles Times showed the great majority of the charity’s grants actually went to elite universities, including the University of Southern California, Yale and New York University. The nonprofit is now at the center of what prosecutors called the largest college admissions scam ever uncovered.

The charity, they allege, was nothing more than a means to launder money from wealthy parents to bribe college administrators and coaches as part of a massive cheating scandal to get their children admitted into the schools. Fifty people have been charged in the probe.

In 2016, the most recent year for which the records are available, Singer’s foundation gave $252,500 to the University of Texas Athletics, $50,000 to the USC Women’s Athletics Board, $25,000 to the USC soccer Program and $83,181 to NYU Athletics, the tax documents show. The documents show $100,000 was donated to a company with an address linked to UCLA’s men’s soccer coach, who was indicted.

Meanwhile, the LadyLike Foundation, which offers mentoring and workshops to girls in Los Angeles, received $10,000 that year. Friends of Cambodia got $18,550.

In 2014, USC sports programs received $225,000, while NYU Athletics received $203,998, the tax records show. The year before, the Fullerton Futbol Academy at Cal State Fullerton received $100,000, the records state. Attempts to reach the director of the academy late Tuesday were unsuccessful.

It’s unclear which donations listed on the tax forms, if any, were used as bribes in the scheme. The documents don’t explain how the grants were used by the universities.

Singer, who owns the admissions company called the Edge College & Career Network, was charged with money laundering, obstruction of justice, racketeering and conspiracy to defraud the United States in a scheme that began in 2011.

He cooperated with authorities in the investigation and pleaded guilty to the charges in Boston on Tuesday afternoon, according to court records.

Prosecutors allege that well-to-do parents paid Singer to help their children cheat on college entrance exams and to falsify athletic records to enable them to gain admission to at least eight schools, a list that also includes UCLA, Stanford and Georgetown.

Not all the schools named in the case received donations, according to the tax records.

Federal law enforcement began the investigation, dubbed “Operation Varsity Blues,” in May, based on a tip from a confidential source who was being interviewed as part of a separate investigation, said FBI Special Agent Joseph Bonavolonta.

The government alleges that Singer instructed parents to donate funds to the charity as part of the scheme. The parents were then able to deduct the donation from their income taxes, according to the Internal Revenue Service.

Among those charged were Hollywood actresses Felicity Huffman, of “Desperate Housewives,” and Lori Loughlin, who starred in “Full House.”