USC’s role in yet another scandal prompts anger, disappointment among its community 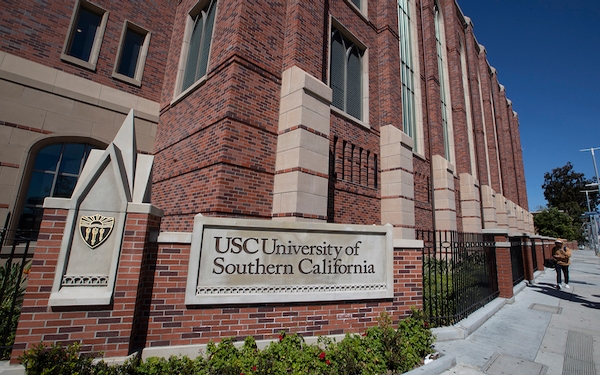 Professor Homayoun Zadeh was an institution at the University of Southern California dental school, rising over a four-decade academic career from student to lab director to chair of the periodontology department.

But when it came time for his own daughter to apply to USC, Zadeh turned to an off-campus connection to make sure she got in. As laid out in an FBI affidavit filed in court this week, the 57-year-old agreed to pay a shady college consultant from Newport Beach $100,000 to bribe a corrupt athletic department administrator. His daughter was admitted as a star recruit in lacrosse, a sport she did not play, according to federal prosecutors.

“I have not shared anything about our arrangement but she somehow senses it,” he wrote of the teenager in a 2017 text to the counselor quoted in the affidavit. “She’s concerned that others may view her differently.”

The largest college admissions scandal in U.S. history stretches from La Jolla to Cape Cod, but its epicenter is Southern California and the private university here coveted by so many children of privilege and their families.

Of the 32 parents named in the FBI affidavit unsealed this week in U.S. District Court in Boston on Tuesday, more than half stand accused of conspiring to bribe their children’s way into USC. Other universities, including Georgetown, Stanford, the University of San Diego and Yale, were also ensnared in the criminal enterprise run by consultant William “Rick” Singer, but the misconduct alleged involving USC dwarfs all other schools.

USC is also different because of its history. Over the last decade, it has been hit with a series of scandals that have raised fundamental questions about the university culture. The NCAA slammed the school for violations involving gifts and benefits given by agents to star football player Reggie Bush and basketball player O.J. Mayo. The head coach of its vaunted football team was fired after slurring his words and shouting a profanity at a booster event. The dean of its prestigious medical school was forced out amid allegations of drug use, and his successor resigned after the Los Angeles Times revealed that the university had paid a financial settlement to a student who accused him of sexual harassment.

Over the last year, the campus has been roiled by allegations, also brought to light by the newspaper, that a longtime student health gynecologist abused and harassed hundreds of students over nearly three decades. The university recently brokered an initial $215 million settlement with former patients, and experts say the final price tag will be much higher.

The college cheating case comes at a time when the university — known for its rising academic achievement and fundraising acumen — is trying to move past the scandals and select new leadership. The university’s search for a new president is in its final stages.

“I’m seeing the value of my education drop and the reputation we worked so hard for get tarnished day by day, and that’s a shame,” said former student body President Rini Sampath, who graduated in 2016. “It’s clear that there’s a culture of corruption at USC, and I personally am glad it is being exposed.”

In the wake of this week’s charges, USC began termination proceedings against Zadeh and fired the athletic department administrator, Donna Heinel, and water polo coach Jovan Vavic, who were also charged. Zadeh did not return messages seeking comment.

USC’s interim president, Wanda Austin, said the university was barring about half a dozen current applicants connected to Singer’s firm and had identified at least $1.3 million in donations from those involved in the scheme.

That money, she said, will be redirected to scholarships for underprivileged students.

“The fact is we were chagrined to discover we had employees committing fraud against the university,” Austin said.

She took the reins last summer as then-President C.L. Max Nikias was forced out amid sexual abuse allegations against campus gynecologist Dr. George Tyndall, who has denied any wrongdoing.

In an interview Wednesday, she was quick to distinguish previous crises from the federal investigation, in which, she said, USC was the clear victim.

“I don’t see it as akin to the other issues we have had, but our response is we are an ethical university and we are holding all of our members to that standard,” Austin said.

Singer pleaded guilty Tuesday, admitting that he masterminded a criminal operation dating back at least a decade. He offered two services to cheat admissions: Doctored scores on standardized tests and what he called “a side door” to elite schools. He bribed coaches at a number of schools to give spots reserved for student athletes to applicants whose parents were willing to pay up to half a million dollars. Singer and his conspirators created phony athletic profiles, complete with digitally altered pictures of the students participating in sports, according to court reports.

USC was unique in that Singer had enlisted an administrator, Heinel, and was not relying on coaches alone to sneak bogus athletes past admissions officers, according to court papers. For Zadeh, who refinanced his Calabasas home to pay Singer, Heinel used USC letterhead to build a fake lacrosse profile that claimed she was a “player who knows how to work as a team in order to win,” according to an FBI affidavit.

Singer has acknowledged collecting about $25 million through his consulting company, Edge College & Career Network, also known as the Key, and a purported charity he started.

The 204-page FBI affidavit provided a window into the desire of wealthy Southern California families to attend USC. In a wiretapped conversation last summer, Beverly Hills marketing executive Jane Buckingham strategized with Singer about paying a man from Tampa, Fla., to take her son’s ACT.

“I need you to get him into USC, and then I need you to cure cancer and (make peace) in the Middle East,” she told Singer, who replied, “I can do that.”

While the accused parents’ desperation for entrance to USC was mocked by many on social media, others saw it as a recognition, however perverse, of the university’s rapid rise in reputation and standards.

“It is an institution that has changed its profile and selectivity so dramatically in the last generation,” said Emmi Harward, the executive director of the Association of College Counselors in Independent Schools. “Alums who have children going through the process may be fully aware of the fact that they would not now be admitted to the institution they graduated from.”

USC’s board chairman, Rick Caruso, a billionaire whose children have attended the university, said he personally knew two families in which parents were charged.

“I’m shocked by it. I am really so legitimately saddened for the kids,” Caruso said. “It’s an unthinkable act.”

He declined to name the families, but said they had never asked him for help in gaining admission. When prosecutors announced the charges, Caruso’s daughter, an undergraduate, was on a spring break trip and ran into the daughter of actress Lori Loughlin, one of the parents accused in the case.

At least two parents who were charged socialized with USC trustees or top administrators. Bill McGlashan, a Marin County financier who manages funds for one of the world’s largest private equity investors, bragged to Singer in a July wiretapped phone call that “half the board knows me” and he planned to ask them to help with his son’s admission.

Singer, on the recording, told him not to say anything to his trustee friends: “The quieter this is, the better it is.”

Defendant J. Mossimo Giannulli, a fashion designer married to Loughlin, traveled to Augusta, Ga., home of the Masters golf tournament, with USC athletic director in 2016, according to the affidavit. It is unclear whether he was speaking of the current athletic director, Lynn Swann, or his predecessor, Pat Haden.

Prosecutors allege Giannulli and Loughlin were conspiring with Singer to bribe one of the athletic director’s subordinates to falsely designate his daughters as members of the crew team to gain admission.

Giannuli asked Singer by text if he should “mention anything,” prompting Singer to respond, “Best to keep (the USC athletic director) out of it. When I met with him a year ago about (your daughter) he felt you were good for a million plus.”

“HAH!!” the designer texted back.

This week, Caruso and Austin were in Washington, meeting with members of Congress for a previously scheduled trip. The politicians had a lot of questions and comments about the admission scandal, they said.

“The best thing you can do is be transparent. There’s nothing to hide,” Caruso said.