Just miles from USC and the admissions scandal, these students sell food for college money 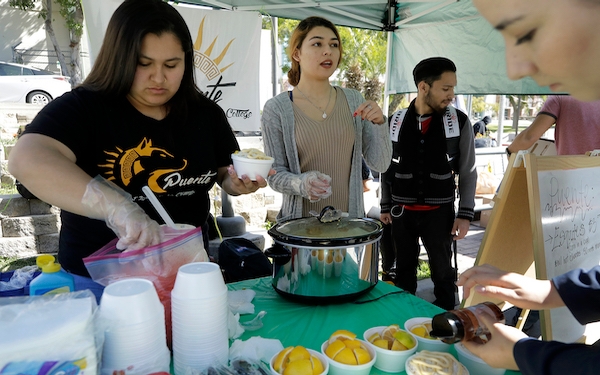 Vanessa Miranda, left, and Destiny Ramirez sell mesquites (corn in a cup) to raise funds for their college transfer program and club, Puente, at East Los Angeles College, on March 13, 2019.

It was morning and the campus was still quiet when Vanessa Miranda began to shout, trying her best to draw customers:

She and some of her East Los Angeles College classmates were selling sliced corn with mayonnaise, butter and cheese at $3 a cup to raise money for their club, Puente, a program that helps students transfer to four-year universities.

Puentistas hustle year-round to sell tamales, bacon-wrapped hot dogs and coffee with pan dulce to pay for trips to visit colleges across California, mentorship and group activities, and graduation caps and gowns.

News this week of the college admissions scandal, in which wealthy parents allegedly cheated and paid to get their children into elite schools, triggered a mix of emotions at this Monterey Park community college, where most students are the children of low-income Latino parents: janitors, gardeners, seamstresses and factory workers. Their daily reality is far removed from the world of Hollywood stars, elite college coaches and Napa winery owners at the center of the scheme.

“It’s very unfair because we work so hard to get an education,” said Miranda, a sociology major who’s hoping to get into the University of California, Davis. “My mom could never say to any school, ‘Here, take this money and get my daughter in.’ Every day, we’re worried about paying our bills and putting food on the table.”

Miranda, 22, lives in the blue-collar city of Bell with her mom, a single mother, and her 8-year-old brother. They share a one-bedroom duplex and a car. Together they make about $25,000 a year.

Some of her East L.A. classmates, like Vanessa Bolanos, were angry at students who they heard had not taken seriously the education that their parents had paid for. Others, like David Mejia, who was leading the group, were disappointed that such distinguished schools could get caught up in the scandal. UCLA was a place he’d idolized since he was 8 years old.

“Now I don’t even want to look at it,” said Mejia, who at 37 is one of the oldest students in Puente, which is Spanish for bridge.

Destiny Ramirez, 21, was conflicted. The scandal has led the psychology major to question all of her efforts.

“It also makes me want to get out there and work harder than ever,” she said.

For many students at community colleges across Los Angeles, the zero-sum game of higher education feels like a labyrinth. Many turn up on campuses feeling overwhelmed and without connections, searching for that one person to stop and point them in the right direction.

The Puente Project has served as a lifeline for hundreds of students at dozens of community colleges. The state-run program focuses on giving under-represented students, mainly Latinos, resources to help them transition to a university. It pays for some college tour expenses, provides counseling and has created a statewide network of mentors to motivate students at annual leadership conferences.

The Puente group at East L.A. College is a tight-knit community of nearly 90 students. They call themselves Puente familia. Some are older, mothers and fathers whose lives detoured and zigzagged post-high school; others are students fresh out of 12th grade.

“People call us ‘Team No Break’ because we’re always working on something,” said Mejia, president of the club.

Aside from peddling corn and other food, Puente students sell T-shirts, and they’re constantly holding events to foster unity. They gather often to help one another with class assignments, scholarship deadlines and college applications.

Some days, they include their families in their activities. That way, they motivate their parents to learn about their college plans and also calm their nerves about common fears, such as uncertain finances and the possibility of moving away to attend college.

The members have a tight bond with their adviser, Carlos Centeno, an English professor who has devoted himself to nurturing the program for the last nine years. Supplies from his students’ many sales pile up in his small office: cups, plates, fliers, a slow cooker.

Centeno said many of his students are bright and driven, filled with enough talent to make it at any big university. He sometimes struggles to get them to see this potential.

When the club goes north to visit prestigious schools like UC Santa Barbara and the University of California, Berkeley, his students are usually stunned by the lack of diversity. Some get off the bus and the first thing they say is: “Why is there nobody here that looks like me?”

It’s OK, Centeno often tells them. You belong here. You are worth it. You have so much to offer.

Centeno said the scandal hardly surprised him. In a system built on so much wealth and privilege, he wonders if any positive change will come from it.

Meanwhile, he’s struggling to know what to say to his students about those institutions. The ones he’s taught them to trust and believe in.

“There’s already so much pressure on them to work harder than others, and that comes with such an emotional toll,” Centeno said.

Still, every day he sees the reward from all the time he invests in the Puente club.

As the students wrapped up their sale Wednesday, they met for their monthly board meeting. They had lots to review for future fundraisers, including where to find the best deals on supplies and ingredients.

“I can bring lemons from my backyard,” said another.

For their graduation banquet, planned at a nearby Mexican restaurant, one mom planned to make all the table centerpieces: shiny gold wine bottles with tall black and white feathers.

Leading the group was the club president, David Mejia. Mejia enrolled in the college two years ago. At the time, he said, he was feeling lost and unsure about his future.

“I was that quiet cholo with the hoodie sitting way in the back of the class,” he said.

Growing up, he often felt like an outcast. In high school, teachers focused their attention on the students they considered gifted. His counselors told him to find a blue-collar job — maybe an auto mechanic or carpenter.

Centeno was the first person who saw his potential, he said. He and other Puente students pushed him to come out of his shell. The child development and sociology major is now waiting to hear back from several universities, including UCLA, which he’s now certain he’d turn down if he got accepted.

Regardless of where he goes to college, Mejia said he knows where he wants to end up.

“I’m going to come back to teach at ELAC,” he said. “I want to help as many students as I can — the same way Centeno helped me.”