Donald Trump Jr. mocks college admission scandal, despite his past at Penn 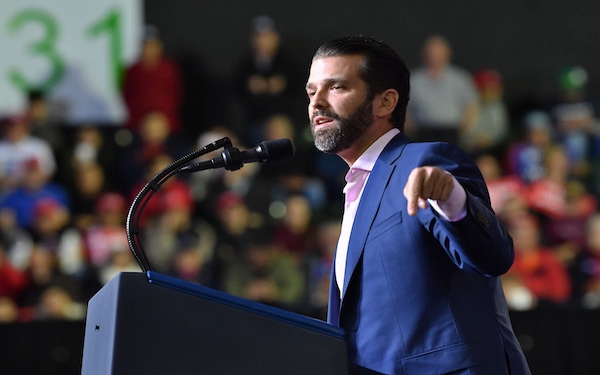 When news broke of the nationwide college admissions scandal charging well-to-do Hollywood celebrities and CEOs of cheating and bribing their unqualified children’s way into top universities, Donald Trump Jr. was quick to mock the accused.

In what was described as the largest college admissions scheme prosecuted by the U.S. Department of Justice, 50 people — including actresses Lori Loughlin and Felicity Huffman — were accused of paying a third party to cheat on their children’s standardized tests or bribing coaches and university officials to accept them as student-athletes, even if they never played the sport.

Moments after the charges were announced, Trump Jr. chided Huffman on Twitter, quipping about learning new back-to-school “hacks” from the Desperate Housewives actress.

But critics suggest the University of Pennsylvania alumnus seemed to look past his own family history.

Although Trump Jr. and his family are not accused of the fraud detailed in Tuesday’s charges, reports suggest it was perfectly legal money and connections that helped ease the first family’s way into Penn’s Wharton School and other elite colleges. The backdoor practice is common among wealthy families, college counselors say.

Despite the president’s portraying himself as a “really smart guy,” Trump’s grades from his two years at Fordham University were simply “respectable,” and it was an interview with a “friendly Wharton admissions officer” who was a friend of Trump’s older brother that allowed the future president to transfer to Wharton’s undergraduate program at Penn in 1966, Gwenda Blair wrote in “The Trumps: Three Generations of Builders and a President.”

And around the time Trump’s son Donald Jr. and daughter Ivanka began classes at Penn in 1996 and 2000, respectively, the university and its private Manhattan clubhouse benefited from more than $1.4 million in pledged donations from Trump, the school newspaper reported.

“This string of donations Trump may have made in the late nineties roughly coincides with his children’s enrollment at Penn,” the Daily Pennsylvanian noted.

Though there are no recent reported donations from Trump to the college, the president’s younger daughter, Tiffany, also graduated from the University of Pennsylvania, in 2016.

And a timely $2.5 million donation appeared to coincide with Jared Kushner, now husband of Ivanka and a top aide to the president, being accepted to Harvard University in 1999, ProPublica editor Daniel Golden reported in “The Price of Admission.”

“There was no way anybody in the administrative office of the school thought he would on the merits get into Harvard,” a former official at Kushner’s New Jersey high school told Golden. “His GPA did not warrant it, his SAT scores did not warrant it. We thought for sure, there was no way this was going to happen. Then, lo and behold, Jared was accepted. It was a little bit disappointing because there were at the time other kids we thought should really get in on the merits, and they did not.”

A Kushner Cos. spokesperson told ProPublica that “the allegation” that the donation to Harvard from Kushner’s father was linked to his son’s admission “is and always has been false.”

Dubbed “Operation Varsity Blues,” the federal charges announced Tuesday involve rich and famous parents, coaches, and officials at numerous schools and have ignited national conversation on the advantages of wealth in America.

On Thursday, two students filed a lawsuit against the University of Southern California, Yale, and other schools ensnared in the alleged pay-to-play scandal, contending they were denied fair admission to the colleges.