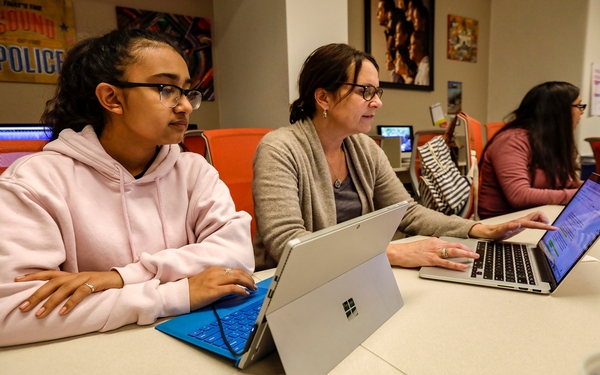 On Saturday morning at the Boyle Heights Beat, a student-run journalism operation, the hot topic was the college entrance cheating scandal and how to craft stories about it for the group’s newspaper and radio show.

Andrea Galdamez apologized for arriving a few minutes late. She said that on weekends, her mother makes and sells pupusas outside the South L.A. home they rent from an uncle.

“I help her set the whole thing up,” said Andrea, a Roosevelt High senior who is waiting to hear back from some of the colleges she applied to. She’s hoping for a scholarship to pay her way.

Andrea said her father paints houses and does construction work, and during the week, her mother works a graveyard janitorial job on the Westside. But their jobs don’t cover all the bills, so Andrea said that when her mother gets home after her Friday night shift, she prepares the pupusas, and then steals an hour of sleep before selling them Saturday morning with Andrea’s 14-year-old sister.

The high and mighty went as low as they could go, and it did not play well in Boyle Heights.

“They already have money and they have resources, and they still had to do these things to get into college?” said Andrea, who gets up early to catch a 6 a.m. bus to school, gets home after dinnertime and still has a few hours of homework each night. “It’s absurd.”

There was no disagreement on that point, or on another one:

Olivia Teforlack, a junior at Francisco Bravo Medical Magnet who wants to go to a University of California campus, said the pressures of high school and the college admission process are overwhelming enough without having to worry about reverse discrimination for the privileged. She wants to major in psychology and build a career helping students who feel as stressed as she does now.

“Some kids are saying: ‘Oh, you’re only taking two APs. I’m taking three or four.’ Well good for you, but I don’t want to die,” said Olivia, who joins clubs and is on the cheer squad to make her college application more appealing.

Christine Kelley, an adult adviser to the Beat — which operates under the auspices of the USC Annenberg School for Communication and Journalism — said she’s been on the job eight years and has never seen students deal with more pressure.

“We just had one get into the University of Oregon, but I don’t know if they’ll be able to afford it,” Kelley said. For most of the kids working at the Beat, getting accepted to college is only the first hurdle. After that, there’s figuring out how to pay for it.

She said students have turned down offers that are close to free rides because they can’t come up with the several thousand dollars still due. Some turn down out-of-state offers because their parents need them to help out at home, or because of a fear of leaving California at a time of anti-immigrant fervor and uncertainty about whether Deferred Action for Childhood Arrivals protections will continue.

In the last week, these students have looked across the divide at youngsters their own age who live in an alternate universe of abundance and entitlement. The kinds of people their own parents work for.

“My mom, she’s a housekeeper and she used to work at a house in the Palisades, and the lady had kids and was very school-oriented,” said Azucena Hilario, a Bravo junior. “They had SAT preps and the older girl was a senior in high school, and they’d use her old tests to study, and they would hire private tutors for them.”

It did not escape the notice of the Boyle Heights Beat reporters that a USC student had put out a video in which she said she didn’t care about college but was looking forward to games and parties. The girl’s parents are charged with paying $500,000 to get her and her sister admitted under the guise that they were recruits for Trojan crew.

Although many Boyle Heights Beat reporters over the years have applied to USC, the program’s mentors could not recall a single one getting admitted.

In anticipation of a radio story for the Beat, Andrea went to work on her Roosevelt campus last week and asked students what they thought of the scandal. The first one, a senior named Luis, knew the name of the cheating scandal’s mastermind.

“Rick Singer … how he was describing it, there’s three ways to get into college,” he said. “There’s the front door, which is you get through yourself. There’s the back door, which, you pull strings and do donations … and then there’s the side door which he kind of created. …You pay him and you’ll get a guaranteed school.”

Luis said he reads up on the college application process and what his peers say about their experiences.

“I constantly see … how students with amazing GPAs and stats, and amazing stories and extracurriculars are not going to the colleges they should have earned. When I think about … even if it was” just 50 students whose parents cheated for them, “those 50 spots could have actually gone to someone who gained those positions.”

Carol said she was talking to her father about the scandal, and they wondered where the cheating stops. Once students fake their way in, do the parents keep paying to have someone fix the tests they take in class?

The students also talked about how, at a high-powered school, they might be in a distinct minority and be looked at as students who maybe didn’t deserve to be there but got a break. But who would look at a student of privilege and wonder the same thing?

The Beat reporters heard each other out and decided to invite a teacher, a college student and a parent — maybe Azucena’s mother — to participate in a radio talk show about the scandal.

One student, Bravo junior Andy Garcia, hadn’t said much during the discussion. Asked if he cared to comment, he shifted in his wheelchair and said he wants to go to college but doesn’t know how he’d ever come up with the money, so he’s doing whatever he can.

He plays wheelchair basketball, he said, hoping for a scholarship.