Elite colleges admit more low-income students than ever before, but scandal reinforces stereotypes 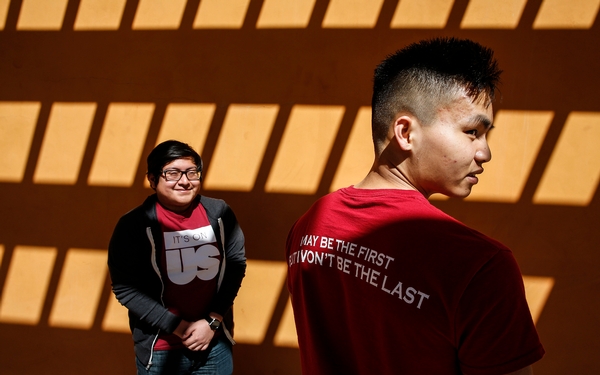 Claremont-McKenna College students Tony Chau, right, and Julian Hernandez are both "first generation" students on March 14, 2019. Neither were surprised to hear of the recent admissions scandal, sayin

Far from the California center of the college cheating scandal, Matt McGann has followed the news with more than casual concern.

McGann is dean of admission and financial aid at Amherst College, which has a $2 billion endowment and a 13 percent admission rate. The western Massachusetts campus, founded nearly 200 years ago, is the kind of rich, elite private college that the wealthy parents ensnared in the scandal sought for their children — and allegedly tried to get them into using huge payments, bribes and lies.

Amherst takes pride in its founding mission to serve “indigent young men,” which has long since been widened to include all genders and has only grown stronger. Now nearly a third of its students are low-income, a percentage that nearly doubled in the past decade. Such news gets buried in the scandal story that top-tier colleges remain the province of the rich.

“It’s disheartening,” McGann said. “No one in admissions likes to see this kind of gaming. It erodes the public trust in the work we do.”

Officials at many leading private colleges and universities say they are working harder than they ever have before to seek, recruit, enroll and support high-achieving, low-income students. They are increasingly tapping their vast resources to try to lift those on the bottom.

Julian Hernandez, the son of Mexican immigrants with limited education and modest means, could have attended UCLA. But he chose Claremont McKenna, a small private liberal arts institution in California’s Pomona Valley that offered to cover most of the $74,000 annual cost of attendance with financial aid. He will graduate in May with about $14,000 in student loan debt — well below the $20,000 average for University of California students, whose college costs are half as much.

“I thought it was too good to be true,” Hernandez said of Claremont McKenna’s offer.

At Claremont McKenna, he said, he has thrived, with opportunities for undergraduate research and internships. Support from the close-knit community helped him overcome initial academic struggles and social awkwardness around affluent students.

Under Claremont McKenna’s president, Hiram Chodosh, the college has stepped up its commitment to students like Hernandez. About 20 percent of this year’s freshmen are low-income and the first in their families to attend college — a proportion that has doubled in four years.

The college already has an $835 million endowment but in the past five years has raised nearly $300 million more for financial aid. A $25 million gift last year from the Kravis Opportunity Fund covers non-tuition expenses, such as health care fees, clothing for job interviews, computers and a stipend that averages $4,500 for summer internships. To help middle-class families, Claremont McKenna now takes home equity out of financial aid calculations.

Access and affordability, Chodosh said, are rooted in the founding vision of the college, whose first students in 1946 were World War II veterans. He hates the idea of a new wave of skepticism about selective colleges like his.

“I’m concerned about a growing frustration with elite institutions generally, including higher education institutions, that becomes very corrosive and can serve to undermine the tremendous investment and success of our leading colleges and universities,” he said.

Many top universities began confronting economic diversity as the next frontier for access in the early 2000s, said Richard Kahlenberg, a senior associate at The Century Foundation, a nonpartisan think tank. Their efforts were propelled by the U.S. Supreme Court’s 2003 decision upholding race-based affirmative action. At the same time, he said, scholars began focusing on the lack of such diversity in elite higher education, leading to some “guilt.”

In 2001, Princeton University broke new ground in its financial aid packages by replacing loans with grants. Today, the school’s average aid package fully covers tuition for students with family incomes up to $160,000, according to Princeton data, and four-fifths of recent seniors graduated debt-free.

Three years ago, Princeton joined a collaborative effort at the nation’s top 270 colleges and universities to enroll and graduate an additional 50,000 high-achieving, low-income students. Since 2004, Princeton has nearly tripled its percentage of low-income students — who qualify for federal Pell grants — to one-fifth of its student body.

Yale University has made similar strides. In the past five years, under President Peter Salovey, the school has used mail campaigns and a simplified online cost calculator to reach talented low-income students. It has become far more active in recruiting, and about 100 Yale student ambassadors make hundreds of school visits annually to spread the word that the Ivy League campus is more affordable and diverse than many think.

In a February speech, Salovey said Yale had hit its recruiting goals two years early. About one-fifth of the current first-year class is low income and first-generation college students. The average annual scholarship is about $53,000.

“For many years, Yale has been seen as an expensive East Coast school — but the reality is most of our students are on financial aid,” said Jeremiah Quinlan, dean of undergraduate admissions and financial aid. “It’s a much more different, diverse place than it has been. Yale is truly a lever of socioeconomic mobility.”

It would be a stretch, however, to say that elite colleges are no longer elite, said Kahlenberg of The Century Foundation. A 2017 study led by Harvard University economics professor Raj Chetty, he said, found that Harvard enrolled 23 times as many rich students as poor ones. And increasing racial diversity may not change the economic picture, he said, citing 1998 findings by two former Harvard and Princeton presidents that 86 percent of African-Americans at selective colleges were middle- or upper-class. (It’s dated, he said, but still the most comprehensive review of that issue.)

University of Southern California USC Provost Michael Quick said an emerging focus at his campus and other leading universities is what he called “experiential equity,” which means making sure that students get an equal shot at transformative college experiences.

One-fifth of USC students now are low-income, with rising numbers who are first-generation, military veterans and community college transfers. Financial aid is up 79 percent in a decade. Academic support has helped boost six-year graduation rates to more than 90 percent.

USC has also joined other private campuses, including Amherst, Claremont McKenna and Yale, in moving to pay for some students’ extra experiences, including summer internships and study abroad.

“Where I feel all universities need to be focusing on now … is this notion that it’s not just enough to be admitted to school or even graduate from school,” Quick said. “You want the experience of these students to be equitable as well.”

He said he is frustrated by scandal-driven headlines that dredge up old digs about the University of Spoiled Children.

“Here you are so proud of all that work and then here comes this narrative again that feeds this very old stereotype,” he said.

USC student Saianna Smith is testament to a different narrative. She’s the oldest of 11 children. Her parents didn’t go to college. The 24-year-old, who is pursuing a master’s degree in educational counseling, first connected with USC in middle school through a university program that reaches out early.

Through the USC Neighborhood Academic Initiative, USC students tutored Smith when she struggled in math. Program counselors helped her through emotional downswings. Even when she enrolled at UC Irvine, she said, the program gave her scholarships and paid for her summer school. And program staff helped her secure financial aid for her master’s program.

USC first had her back when she was in the seventh grade, she said. It’s been with her every step of the way since.