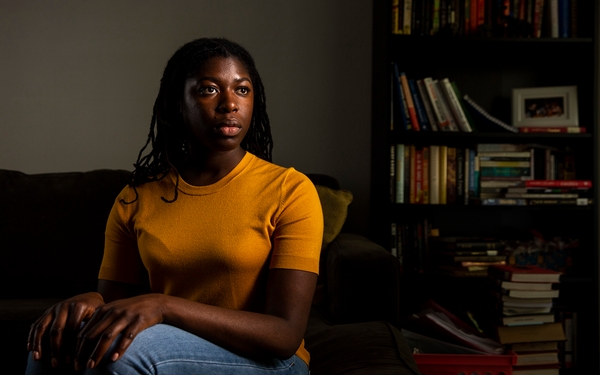 Yatta Kiazolu poses for a portrait on Friday, March 15, 2019 in Los Angeles, Calif. Kiazolu, a UCLA student, testified before the House Judiciary Committee about the Deferred Enforced Department.

After this month, Yatta Kiazolu will be eligible for deportation to a country where she had never lived.

The 28-year-old doctoral candidate in history at UCLA was born in Botswana to Liberian parents. She has lived in the U.S. since she was 7 and since 2002 has maintained legal authorization under a humanitarian relief program.

President Donald Trump moved to end deferred enforced departure for Liberians last year, saying that the country is no longer mired in armed conflict and has sufficiently recovered from the 2014 Ebola outbreak in West Africa. More than 350,000 Liberians were displaced by civil war and fled the country.

The program is set to end March 31, leaving an estimated 4,000 people vulnerable to deportation. Though DED bears a strong resemblance to temporary protected status — another humanitarian program facing termination that would affect about 400,000 immigrants — it has largely been left out of the national conversation.

Civil rights advocates sued the Trump administration this month over the program’s termination, calling it racially motivated. Kiazolu, one of the plaintiffs, testified to Congress about how the program’s end would affect her.

“My grandmother used to say, ‘When you do good, you don’t do it for yourself — you do it for God.’ And with that philosophy as my personal mantra, though the majority of my family are now permanent residents and U.S. citizens, I’m here for all the working-class immigrants on DED, TPS and (who) are also ‘Dream-eligible,’” she told the House Judiciary Committee March 6, referring to protections for immigrants brought to the U.S. illegally as children. “I’m here for all the young people like myself who have anxiety about their futures.”

Liberia had two civil wars from 1989, the year before Kiazolu was born, to 2003. Since 1991, the country has been designated for either TPS or DED at alternating points by Democratic and Republican administrations alike.

It’s also the only country designated for DED, though citizens of China, El Salvador, the Persian Gulf region and Haiti have all previously been eligible. Like TPS, the program allows people from countries devastated by natural disasters or war to work legally while they remain in the U.S.

The lawsuit was filed on behalf of 15 Liberians, their U.S. citizen children, and two advocacy organizations for black immigrants. Lawyers called the termination of protections unconstitutional and asked that the court prevent Trump from ending the program for Liberians.

“At every turn with this administration, we have seen immigration policies that are driven by racial animus,” said Kristen Clarke, executive director of the Lawyers’ Committee for Civil Rights Under Law, one of the groups suing.

The Homeland Security and Justice departments declined to comment. The White House did not respond to a request for comment.

Lawyers cited Ramos v. Nielsen, the lawsuit filed in U.S. District Court in San Francisco over the Trump administration’s termination of TPS for immigrants from El Salvador, Haiti, Nicaragua and Sudan. Lawyers in that case similarly alleged that government officials approached their decision to end TPS with a political agenda, ignored facts and were motivated by racism.

Liberia’s history is rooted in U.S. slavery and colonialism. Thousands of freed slaves were sent to Africa before the Civil War. Many settled in what would become Liberia. Kiazolu, the UCLA student, has ancestors who were enslaved in South Carolina.

Lawyers said conditions in Liberia justify an extension of DED, referencing a 2017 State Department report detailing human rights abuses including extrajudicial killings, police abuse, official corruption, female genital mutilation, criminalization of same-sex conduct and a culture of impunity. The country is one of the world’s poorest: Remittances in 2016 accounted for nearly one-third of its gross domestic product.

Other plaintiffs include a nursing assistant in Minnesota who fled Liberia during the civil war after family members were jailed, disappeared, shot and attacked; and a health care worker in Massachusetts who has lived in the U.S. for 20 years and has six children who have never visited their father’s home country.

The children of Liberians face an unreasonable decision, lawyers say. Liberian law forbids dual citizenship, so if forced to leave with their parents, the children would have to renounce their U.S. citizenship to legally work and access other rights granted to Liberian citizens.

“For these U.S. citizen children, the Trump administration has set up an impossible and unconstitutional choice: lose your parents or lose your citizenship,” the lawsuit says.

Kiazolu is set to graduate this fall. Administrators haven’t been able to tell her what could happen to her research funding or whether she’ll even be able to remain a student. Without permission to work, she doesn’t know how she’d pay back her student loans.

Unsure of how to prepare, she has continued her regular routine, spending most days working on her dissertation about how black women in the U.S. and in Africa collaborated in the 20th century on issues of women’s and civil rights.

Kiazolu’s father was working for the United Nations in Botswana when she was born, a year after the war started. When he got a job in Liberia in 1997, the war was still raging. Fearing for their safety, her mother sent her to live with her grandmother in Decatur, Ga., and followed her soon after.

Kiazolu has no other paths to legal authorization. At 21, she aged out of qualifying for permanent residency through her U.S. citizen grandmother. Her stepfather, also a citizen, applied for her in 2016, but there is a yearslong wait. Her application was never chosen for a diversity visa, which is granted randomly for people from countries with low rates of immigration to the U.S. She also doesn’t qualify for a student visa, for which applicants must demonstrate strong ties to their home country.

Her dream is to graduate and become a teacher in the country she knows as home.

“It’s hard to think about,” she said of her potential deportation. “I’m obviously proud of my heritage and family, but what are people really asking of me in this situation? It’s just wild and immoral.”