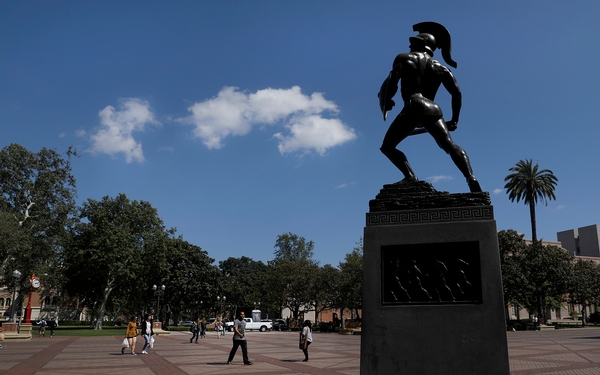 As the fallout from a massive college admissions cheating scandal that has ensnared several elite universities across the country enters its second week, University of Southern California officials have started investigating students who may be linked to the scheme.

The university said Monday it has placed holds on the accounts of students possibly tied to the far-reaching scandal, which bars them from registering for classes or acquiring transcripts from the college while they are under review. The university said it has notified the affected students but did not disclose the number involved.

“Following the review, we will take the proper action related to their status, up to revoking admission or expulsion,” the university said in a statement.

The majority of college applications, including those for USC, include an affirmation statement that students sign declaring that all information is factually true and honestly presented. It never pays to lie on an admissions application as those misrepresentations, if not caught immediately, could catch up with a student in the future, said Mark Sklarow, CEO of the Independent Education Consultants Association.

If a university finds out at any point during someone’s college career that they lied on their application, they can revoke admission to the school. If the person has already earned a degree, the school can revoke it, Sklarow said.

“What most people don’t know is if a college finds out a year later or four years later that you lied on your application, they can withdraw the offer of admission,” Sklarow said. “Nothing that happened while you’re on campus will count. They’ll never release a transcript. You’re gone.”

USC officials said last week that students who applied for admission in the current cycle — which is underway for fall admissions — and are linked to the scheme will be denied admission. That includes about six applicants.

News of the cheating scandal sent shock waves through higher education institutions across the country and heightened debate about the advantages the ultra-rich enjoy in accessing elite colleges amid intense competition in which merit alone is not enough to ensure admission.

Faculty members of USC’s Annenberg School for Communication and Journalism on Monday pledged to conduct their own probe — independent of the university’s investigation — into the admissions cheating case, along with previous scandals involving the college.

Among the parents charged were Hollywood actress Felicity Huffman from the TV series “Desperate Housewives,” and actress Lori Loughlin from “Full House” and her husband, fashion designer J. Mossimo Giannulli. The couple’s youngest daughter, Olivia Jade Giannulli, is a freshman at USC this year.

Loughlin and Giannulli allegedly shelled out roughly half a million dollars to get both of their daughters into USC. The couple saw being a coxswain as Olivia Jade’s ticket into the private college, which boasts an admission rate of 13 percent, even though she had never competed in the sport, according to an affidavit filed in federal court.

Former USC senior associate athletic director Donna Heinel, who was also charged in the scheme, asked the couple to submit photos of their daughter in a “boat” where it is “tough to see the face.” They also submitted a photo of the girl rowing on a machine, according to the document.

Heinel and men’s and women’s water polo coach Jovan Vavic were both fired after allegations came to light that they had received bribes in exchange for helping students get into USC as purported athletic recruits.