No soccer experience, but she still got a spot on elite UCLA team in admissions scandal 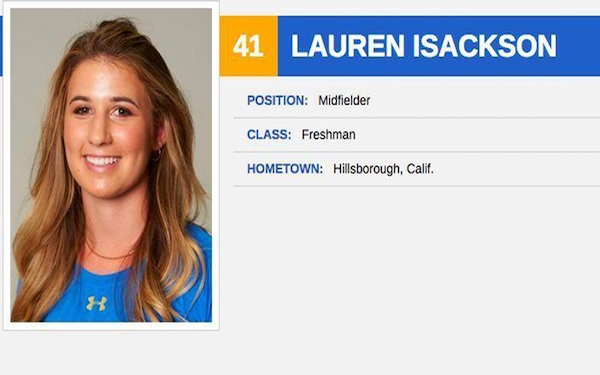 Lauren Isackson was admitted to UCLA as an athletic recruit in 2016. Her parents have been charged with conspiring to bribe a UCLA coach to pass her off as a recruit.

Lauren Isackson’s athletic credentials were dwarfed by those of her teammates. She joined the vaunted UCLA women’s soccer program in 2017 alongside members of the U.S. and Canadian national teams — elite athletes accustomed to dominating the high school and club circuits, being the best in their leagues, their states, even their entire home countries.

Isackson’s biography on the UCLA roster, meanwhile, lists her as an honorable mention all-league selection in 2014 for the West Bay Athletic League in Northern California.

But even that was false, according to federal prosecutors who have implicated Isackson’s parents in a broad conspiracy to sneak the children of wealthy and powerful families into top-flight universities they may not have been qualified to attend.

Fifty people were indicted last week for their alleged roles in the scheme. Coaches, university officials and dozens of parents — including Hollywood actresses, business executives and a fashion designer — are accused of working in concert to rig college entrance exams and misrepresent applicants as recruited athletes. The Isacksons allegedly made their payment in Facebook stock.

William “Rick” Singer, a college admissions consultant and the admitted mastermind of the scheme, said in federal court last week he bribed coaches to pass off his clients’ children as athletic recruits, ensuring their admittance to elite schools like Stanford, the University of Southern California, Georgetown, Yale and UCLA.

Many of the children did not even play the sport for which they were recruited, prosecutors say, and by the time they arrived on campus nearly all of them had dropped off their respective teams.

When she was admitted as a recruited soccer player in June 2016, a UCLA student-athlete admissions committee required she play on the team for at least one year, the indictment says.

And so Isackson — who prosecutors say lacked even the modest accolades listed on her biography — was given the No. 41 jersey in 2017 on a team of all-stars and pros-in-waiting. Every other player on the roster was assigned a jersey number between 00 and 28.

Her fellow freshmen were heralded as the second-best recruiting class in the nation. It included the top recruit in the country, a member of the Canadian national team, and five players on the U.S. youth national team. A university press release quoted head coach Amanda Cromwell saying, “When all is said and done, this class may be one of the best.”

Isackson did not play competitive soccer before matriculating at UCLA, prosecutors say, and yet for an entire season she was listed as a midfielder on the roster of a team that finished the 2017 season as runner-up to national champion Stanford. Her profile on a Pac-12 website says she made no appearances and played no minutes during the season.

Tod Tamberg, a spokesman for UCLA, said student privacy laws prevented him from discussing the situations of individual students. But he said all teams at UCLA “include student-athletes with varying levels of athletic achievements.”

“Some team members are on the roster for the purposes of preparing the team for competition, and may not play in games,” he said Monday.

A 2017 media guide describes Isackson as a practice player. According to her UCLA biography, her “greatest athletic thrill” did not come on the soccer field, but on horseback, when she became champion of her riding division two years in a row.

Isakson is not on the team’s current roster. She is still a student at UCLA, according to Tamberg.

Citing the indictment, Tamberg blamed Jorge Salcedo, UCLA’s men’s soccer coach, for allegedly submitting a “falsified soccer profile” to the university, and said the coach had been placed on leave. The school has initiated a review of the allegations, which is ongoing, Tamberg added.

Salcedo has been indicted on charges of conspiracy to commit racketeering. His attorney declined to comment.

Isackson could not be reached for comment. An attorney for her parents, who have been charged with conspiracy to commit mail fraud and honest services fraud, declined to comment.

Isackson’s parents began conspiring with Singer in 2015 to have their daughter admitted as an athletic recruit, according to an indictment unsealed last week. Their first choice was USC, but because of a “clerical error,” Isackson’s fake athletic profile was diverted to the normal admissions process in February 2017, foiling Singer’s scheme, according to an FBI affidavit.

Singer then sent the fake athletic profile of Isackson in May 2016 to Ali Khosroshahin, a former USC women’s soccer coach, who passed it onto Salcedo, prosecutors say. Khosroshahin has also been indicted on charges of conspiracy to commit racketeering.

Salcedo sent the girl’s transcript and test scores to an unnamed UCLA women’s soccer coach, according to the indictment. About a month later, the “UCLA Student-Athlete Admissions Committee” approved Isackson for admittance as a recruited non-scholarship athlete, the indictment says.

Cromwell, the UCLA women’s soccer coach, did not respond to a request for comment.

Apart from Salcedo, no UCLA employees have been charged in the alleged scheme.

For passing their daughter off as a recruited athlete, Bruce and Davina Isackson gave Singer’s charity 2,150 shares of Facebook stock, valued at about $250,000, the FBI affidavit says.

The day her daughter was approved by a UCLA student-athlete admissions committee, Davina Isackson thanked Singer in an email. Her daughter and husband were copied on the note.

“I know it has been a rough ride,” she wrote, according to the affidavit, “but I thank you from the bottom of my heart and soul for your persistence, creativity and commitment towards helping (our daughter).”

A profile of Isackson appears on one of Singer’s websites, the Key Athletics Club. It describes her as a “standout high school senior” and “captain of her local club soccer team.” Her UCLA biography says she was “team captain for Woodside Soccer Club from 2012-16.”

Zak Ibsen, the club’s director of coaching for the last two years, said he spoke with former coaches at Woodside Soccer Club from the years Isackson purportedly played for the club, and that none remembered her. Ibsen himself played for UCLA and won a national championship in 1990 alongside Salcedo.

“Nobody remembers this girl’s name,” he said. “Smells fishy to me.”

Singer, who began cooperating with the government in a bid for leniency, called Isackson’s parents in September. With the FBI listening in, he told them his charity was being audited by the Internal Revenue Service and wanted to be sure their stories dovetailed.

Bruce Isackson insisted on talking in person, telling Singer that while he “can’t imagine they’d go to the trouble of tapping my phone,” he was “so paranoid about this (expletive) thing,” according to a transcript in the affidavit. Singer met Bruce Isackson at his Hillsborough home, wearing a wire.

Bruce Isackson was recorded fretting about how the operation could unravel, and the embarrassment it would spell for his family.

“If they get into the meat and potatoes” of the scheme, he allegedly said, it could be “the front-page story.”

“The embarrassment to everyone in the communities,” he said. “Oh my God, it would just be — yeah. Ugh.”