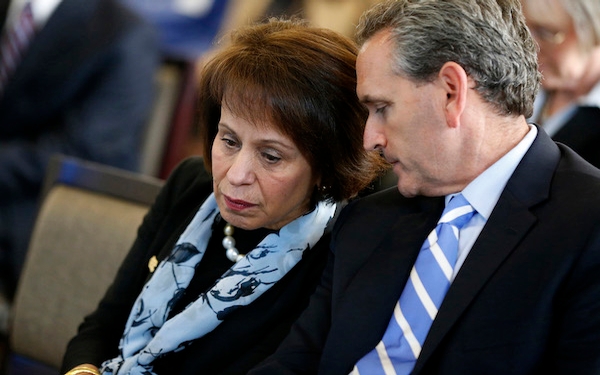 The University of Southern California has chosen Folt as its next president. (Ethan Hyman/Raleigh News & Observer/TNS)

Carol L. Folt, the recently departed chancellor of the University of North Carolina at Chapel Hill, will be the next president of the University of Southern California, a choice underscoring the university’s desire to turn the page on myriad scandals that have defined it in recent years.

Folt, whose appointment was approved by the Board of Trustees on Wednesday morning, will become the first female president in USC’s 139-year history.

She is taking the helm at a time when USC has been buffeted by a succession of controversies, including the unfolding college admissions scandal, which saw USC employees and parents charged; drug use by the former dean of its prestigious medical school; and the sexual assault allegations against a campus gynecologist.

It was the accusations against the gynecologist, Dr. George Tyndall, last year that cut short the tenure of university President C.L. Max Nikias. His eight-year term saw USC skyrocket in academic rankings and prestige, and the fundraising campaign he spearheaded brought more than $6 billion to USC.

Critics, however, said the university lost its way ethically in the Nikias era, and hundreds of faculty called on him to resign last summer. He turned over his office to a trustee, retired aerospace executive Wanda Austin, who has served as interim president since August.

Folt has considerable experience with high-profile campus controversies. She arrived at UNC in 2013 shortly after revelations of a long-running and vast academic fraud involving Tar Heel athletes and “no-show” classes. As chancellor, she implemented reforms and dealt with an NCAA investigation.

Much of her final years at Chapel Hill were consumed with a conflict over a Confederate monument that many students deemed racist and wanted removed. State law protects such monuments, and in January, after Folt ordered the monument moved to storage, she was forced from the chancellor’s post.

The USC job is a return trip to California for Folt. An environmental scientist, she received bachelor’s and master’s degrees from the University of California, Santa Barbara and a doctorate from UC Davis. She joined the Dartmouth faculty in 1983 and rose to become provost and interim president before leaving for North Carolina.

In USC, Folt is returning to a private institution governed not by political appointees, but by some of the Pacific Rim’s most wealthy and powerful people. USC’s board members include real estate moguls, Hollywood insiders and industrial titans from China and India.

With its 47,000 students, USC is significantly larger than UNC, which has an enrollment of about 30,000, according to U.S. News and World Report.

Folt’s appointment comes as USC is grappling with the latest in a series of scandals: the federal charges of college admissions cheating in which the university played a central role.

Of the 32 parents named in the FBI affidavit filed in U.S. District Court in Boston, more than half stand accused of conspiring to bribe their way into USC. Other universities, including Georgetown, Stanford, the University of San Diego and Yale, were also ensnared in the criminal enterprise run by consultant William “Rick” Singer, but the misconduct involving USC dwarfs all other schools.

The NCAA previously slammed the school for violations involving gifts and benefits given by agents to star football player Reggie Bush and basketball player O.J. Mayo. The head coach of its vaunted football team was fired in 2015 after slurring his words and shouting a profanity at a booster event.

Two years ago, the Los Angeles Times reported that former medical school Dean Carmen Puliafito used drugs and partied with a circle of criminals, and his successor resigned after the Times revealed that the university had paid a financial settlement to a medical school fellow who accused him of sexual harassment.

Over the last year, the campus has been roiled by allegations, also brought to light by the Times, that Tyndall — who spent 27 years at the student health clinic — abused and harassed hundreds of students over nearly three decades. The administration reached a secret deal with the gynecologist that allowed him to leave the university with a financial payout and a clean record with the state medical board.

The university recently brokered an initial $215 million settlement with former patients, and experts say the final price tag will be much higher.

Campus News
Colleges campuses are trying to reopen in the fall. The main source of opposition? The faculty
234 views