‘Us’ is a whip-smart modern horror instant classic 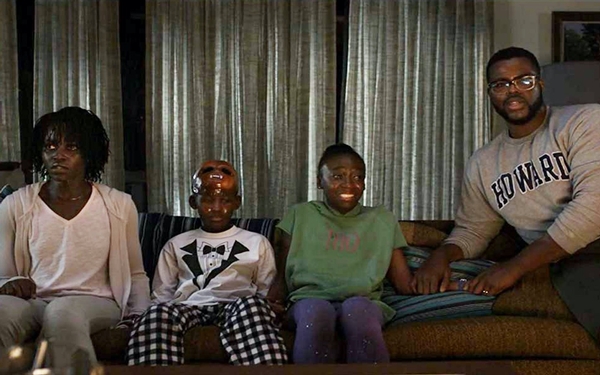 Comedian-turned-filmmaker Jordan Peele earned an Oscar for “Get Out,” his debut feature film, so the stakes are high for his follow-up, “Us.” Premiering to primed audiences at the South by Southwest Film Festival in Austin, Texas, the reviews have been raves for Peele’s latest, and it’s a pleasure to report they are correct. There’s no sophomore slump to be found here, and Peele remains one of the most exciting American filmmakers — in any genre — to come around in a long time.

“Us” is signature Peele — a ’70s-inspired horror flick that wears its references on its sleeve, grapples with Big Ideas and crawls with genuinely creepy tension, lightened with dashes of well-earned humor. This is a family horror melodrama that ponders huge philosophical questions about our own existence and identity. But it doesn’t just pose conspiracy theories and ask “what if?” “Us” brings all those nightmares to life and visualizes the worst-case scenario.

Like so many of the great classic horror films of the ’70s — “The Exorcist,” “Rosemary’s Baby,” “Carrie,” “Halloween,” etc., Peele uses the horror genre to explore the meaning of family and our postmodern fractured sense of self. Our unsuspecting picture-perfect American family is the Wilsons: Gabe (Winston Duke), Adelaide (Lupita Nyong’o) and their children, Zora (Shahadi Wright Joseph) and Jason (Evan Alex). They arrive in Santa Cruz, Calif., at their family summer home ready to enjoy the beach town — even though Adelaide is troubled by disturbing memories of her childhood there.

“Us” is a classic home invasion thriller, but it’s so much more than that. It traffics in dangerous doppelgangers, body doubles and twins. When a strangely identical version of the Wilson family — clad in red jumpsuits and wielding sharp scissors — shows up in their driveway one night, it turns out this is a soul invasion. As both Adelaide and Red, the matriarch of the photocopied Wilson family and leader of the attack, Nyong’o anchors Peele’s film with a horrifyingly spellbinding and bone-rattling dual performance. Red is a horror hall-of-fame scary mommy unlike any you’ve ever seen.

Nyong’o is virtuosic, transcendent in her performance, and Peele demonstrates a mastery over filmmaking craft and tone much in the same way he did with “Get Out.” He has tapped “It Follows” cinematographer Michael Gioulakis to lens “Us,” using long, slow camera movements that build slow, creeping dread, while composer Michael Abels combines classical composition with pop and hip-hop to create a score and soundtrack that reflects the blend of traditional and irreverent that has become Peele’s hallmark.

But while the script for “Get Out” felt like a tightly wound watch, gears catching just so, every detail in place, “Us,” feels bigger, broader and yes, messier. Peele has widened his scope from one community’s terrible secret to the entire country, dabbling in ideas of governmental mind control and total societal collapse. It at once feels like a home invasion thriller, a zombie movie, an apocalypse film and ultimately, an identity crisis. It’s incredible that “Us” manages to be all those things with style and grace, but there’s a looseness that feels like it hasn’t fully set yet.

Despite any wobbles in the scope of the script, Peele is a devastatingly effective horror filmmaker, wringing tension from the slightest moments, and his storytelling ambition and creativity are astonishing. However, it wouldn’t be as truly terrifying as it is without the jaw-dropping performance from his leading lady Nyong’o, and with this collaboration they have created another whip-smart modern horror classic.

Rated R for violence/terror, and language.