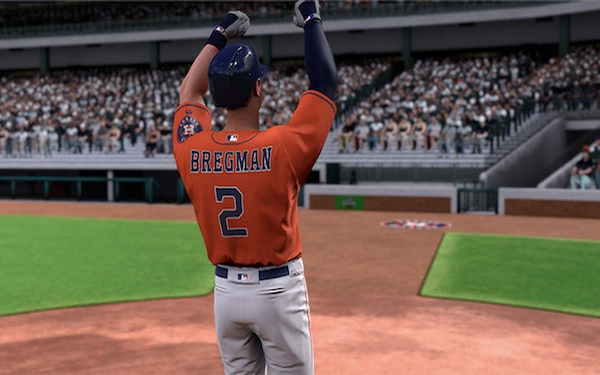 Baseball season is on the verge of throwing out the first pitch. And that means the video game incarnations of America’s pastime are getting ready to take the field. For the past six years, Major League Baseball Advanced Media has been working to get its own video game series off the ground, reviving the old-school “R.B.I. Baseball” series.

Unfortunately, “R.B.I. Baseball 19” still feels like it’s coasting on nostalgia in more ways than one. Compared to its modern competitors, this game feels stuck in the past and unwilling to take any real chances. But more than that, the actual on-the-field play feels less like a World Series champion and more like the 2018 New York Mets.

“RBI Baseball 19” is where one goes for no-frills baseball. Don’t look for any creative game modes or twists on the Major League product. The only game modes available are Exhibition, Franchise (which runs for ten seasons), Postseason, and Home Run Derby. There is online play, but only for Exhibition games with no custom rule sets. Those looking for anything special won’t find it here.

The on-field product isn’t anything special either. Pitching is a throwback to vintage baseball games of previous generations. That’s not a compliment. The only options in place are fastball, change-up, and curving a pitch based on tilting the analog stick. In an age where baseball games have learned to incorporate individual players’ pitching styles and signature pitches, this system feels archaic. There isn’t any real degree of immersiveness or control. Batting feels similarly dated, with the only options being to control a swing’s angle with the analog stick or bunt. It feels brainless and boring, not helped by a lack of on-the-field commentary or any attempt to replicate an actual Major League broadcast.

Then there’s the fielding and that’s where things get a little messier.

Fielding doesn’t look terrible at first glance, but prolonged play starts to make the flaws more readily apparent. Those flaws mainly revolve around the game’s AI. The CPU teams will often keep the ball on the ground, but many instances will see the AI select a player that’s not closest to the ball. Did the CPU player hit one to the warning track? Why should the nearby left fielder pick it up when my center fielder can run across the field from a much longer distance, only to see the ball hit the wall? Some of the AI choices are just baffling.

CPU teams also get plain reckless with their base running. If someone gets on base, they’ll often try stealing with no rhyme or reason. That makes it easy to try and gun them down at second base, except the runner will realize about halfway through what a dumb idea this was and try to retreat. It’s entirely possible to have a game with more rundown plays between first and second than it is to have a CPU try sliding into second base.

The AI issues don’t end there. The trade machine isn’t exactly the brightest either, making it too easy to make the sorts of deals that would never fly in an MLB front office or in any sort of fantasy league. But if you’re looking to trade for Mike Trout or Bryce Harper for virtual peanuts, this is the game for you.

THE BOYS OF SUMMER

One area where “R.B.I. Baseball 19” does succeed is with its art assets. Player models look better than they were in previous versions of the game. Stadiums look crisp, accurate, and beautifully detailed. But it’s in the animations where things start to fall apart. Players look stilted in almost every aspect, from moving on the mound to moving on the field. Batters are almost static in the batter’s box, sliding around without actually stepping around. It’s something that I’ve come to expect from older generations of baseball games, but again, the genre has evolved past this point. It’s another example of the wrong kind of nostalgia trip.

The best thing to say about “R.B.I. Baseball 19” is that it’s simple baseball on a relative budget. Those looking to jump right in with no bells and whistles will be served well enough here. Getting a game going with friends is a simple process. And it’s a decent enough waste of an hour. Nothing here is offensively bad.

Unfortunately, those looking for a deeper, more immersive baseball experience can do so much better than R.B.I. Baseball 19. And those hoping that this series can eventually get to the Major League level may not want to hold their breath. After six years, it feels like this series is what it is, doomed to dwell in the minor leagues with no call-up in sight.

This review is based on an Xbox One digital copy provided by the publisher. R.B.I. Baseball 19 is available now on the PlayStation Store, Xbox Live Marketplace, and Nintendo eShop for $29.99.

The game is rated E.

Reviews
‘Fire Emblem: Three Houses’ is Nintendo at its most flirtatious
2,470 views