Yoko Ono, from pariah to paragon: Why 75 women are paying tribute to her legacy at Disney Hall 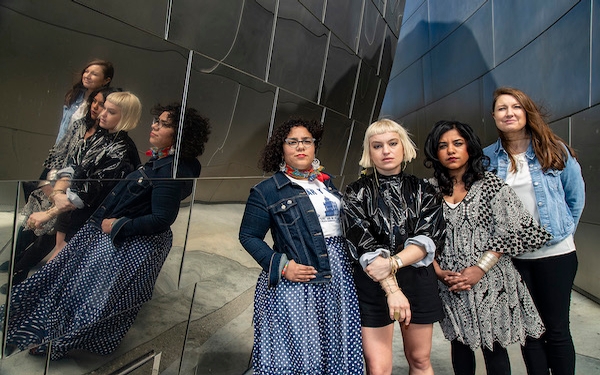 Reflected in the steel exterior of Disney Concert Hall, these four women are involved in celebrating the music of Yoko Ono in a concert-like performance focusing on empowering women-identified artists

Yes.  That was the word Yoko Ono painted on the ceiling of the Indica Gallery in London in 1966. Visitors to the space were invited to climb a ladder and look at the letters through a magnifying glass. One such guest was John Lennon. The rest is history.

A positive affirmation may have ignited one of rock music’s most famous love stories but negativity dragged it down. Ono was villainized as the woman who destroyed the Beatles. Fifty-three years later, a new generation of women is looking at the way Ono was treated in a new light. They see her as an artistic hero: a Japanese woman belittled and shamed for dating a white rock star and being a powerful presence in his life.

At 86, Ono, now an elder stateswoman of the art world, is being celebrated Friday night at Walt Disney Concert Hall in a show titled “BreatheWatchListenTouch: The Work and Music of Yoko Ono.”

The night is part of the Los Angeles Philharmonic’s Fluxus Festival, which pays tribute to the experimental community of artists to which Ono belonged in the 1960s and ‘70s. That movement emphasized the creative process over the finished product. The show Friday is produced in collaboration with Girlschool, a creative community and festival that celebrates and connects women-identified artists, leaders and voices.

Girlschool was founded by Anna Bulbrook, who made her name playing violin in the indie rock band the Airborne Toxic Event, which performed in Disney Hall in 2009. Bulbrook has deep ties in the L.A. music world, and together with Fluxus Festival creative producer Kate Nordstrum and L.A. Phil director of presentations Johanna Rees, Bulbrook programmed an eclectic lineup of some of L.A.’s most interesting female musicians and artists, including St. Vincent, Shirley Manson, Miya Folick, Sudan Archives and Madame Gandhi.

More than 75 people are in the show, including a 14-piece music ensemble, a 25-person chorus, 12 guest artists, nine dancers and a 15-person crew from Girl-school. Interactive art installations will populate the lobby, and an idea exchange market featuring feminist nonprofit arts groups will set up around the hall before the show.

“I look forward to the day when this is commonplace, but a production that brings 75 women into a major cultural institution is still unique,” Bulbrook said in an L.A. Phil office. She was joined by Rees as well as Shruti Kumar, the composer and producer who did the musical arrangements for the show, and singer Marisol “La Marisoul” Hernandez from the Grammy Award-winning band La Santa Cecilia.

The women drank coffee and talked about the kismet way “BreatheWatchListenTouch” came together. “Yes” was again the word of the day, with most people saying it the minute they were invited to participate.

“We all have such deep shared gratitude for being a part of this,” said Kumar, a child piano prodigy who played on “Late Show With David Letterman” when she was 9. Letterman asked Kumar if she thought he was smart, and she told him she didn’t know because she hadn’t spent enough time with him.

Kumar attended the same college as Bulbrook (Columbia) and the two became good friends in L.A.

“Shruti is a musical genius,” Bulbrook gushed, and the admiration is clearly mutual. These women can’t say enough positive things about each other and about Ono. Female empowerment is the order of the evening, and the sense of uplift contrasts sharply with the doom and gloom that drives national politics.

That too seemed to happen naturally, the women said. Ono’s music and art can be unique and challenging. It is open to interpretation, and it is often not complete until audience members weigh in with their own thoughts. But there is a unifying theme: love.

“Who influenced John Lennon to be focused on peace?” Bulbrook said. “Yoko Ono has literally changed the world, and she’s had to do it from a position of being publicly overlooked and spurned.”

By celebrating her work at a space like Disney Hall, the women hope to poke holes in less-welcoming cultural trends, Bulbrook said. “BreatheWatchListenTouch” is inclusive on many levels, with artists representing different cultures, races, religions and sexual orientations.

“There’s such a universality to this music,” Kumar saod. “People want to think about these beautiful messages. The opportunity to engage with this art in this political climate has been very welcome for all the artists.”

The process of putting the show together has lasted more than two years, Rees said. The instant that the idea of a Fluxus festival came up, it was obvious Ono had to be included. Five pieces by her have been performed as part of the festival since it launched last year.

Ono and her archivist have signed off on every artist and every song that will be part of “BreatheWatchListenTouch,” Rees said, and if her schedule permits, Ono will attend the show.

“We are trying to grasp and realize her vision — the whole idea Yoko had of involving the audience,” Rees said. “Your artwork is not finished by you; it’s open-ended.”

Thanks to that attitude, Ono has been accepting of the different interpretations artists are putting on her work with Kumar’s help.

La Marisoul is singing “Born in a Prison” and “Let Me Count the Ways.” The former is a bluesy number Ono performed with Lennon in the early ‘70s that laments confinement and searches for freedom; the latter is a tender lullaby from Ono and Lennon’s album “Milk and Honey,” released after Lennon’s 1980 murder.

La Marisoul said her father recently died, so the words speak to her in a special way.

“Yoko’s work is an experience whether you’re reading it, or listening to it or singing it,” she said. “I don’t know how exactly it’s gonna come out, but it’s going to be beautiful and amazing.”

Singer songwriter Miya Folick is performing “Soul Got Out of the Box” and “Toy Boat.” She said that both touch on issues she is exploring in her own life — particularly the first song, which articulates a feeling of being spiritually out of tune.

“I’ve been on the road performing, and I sometimes feel my soul isn’t connected to what I’m doing every night,” said Folick on the day she arrived at the SXSW festival in Austin, Texas.

Violinist and vocalist Sudan Archives, who lives and works in Boyle Heights, said she relates to Ono’s artistic intentions.

“She wanted to shock people; she wanted people to feel emotions,” Archives said. “That’s what I want people to do with my music — to feel something organic.”