Mötley Crüe’s long-awaited biopic ‘The Dirt’ readies for its Netflix debut. After #MeToo, do we need 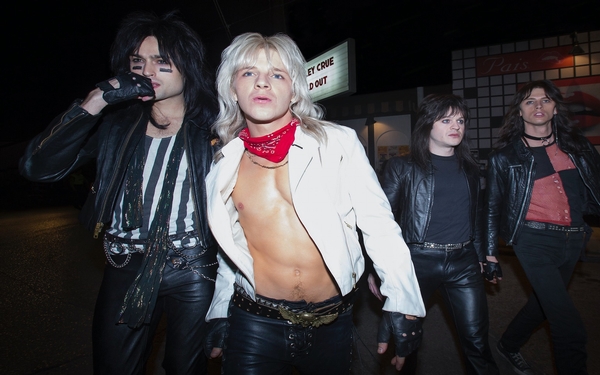 A still from "The Dirt." (Jake Giles Netter/Netflix)

At the end of a recent conversation regarding the new Mötley Crüe biopic “The Dirt,” the band’s drummer, Tommy Lee, paused to reflect on those halcyon days of the 1980s, when heavy metal ruled the Sunset Strip and his band was on top of the world.

“Today’s so different. We got away with murder,” he said.

Based on Mötley Crüe’s 2001 best-selling autobiography of the same name and directed by “Jackass” co-creator Jeff Tremaine, “The Dirt” — which arrives Friday on Netflix — ignores the most controversial scenes in the book, including one that recounts an incident at a party in which, unbeknownst to an unnamed victim, band member Nikki Sixx sneaks Lee and an anonymous teenager into a sexual scenario with the “slurring and stumbling” woman.

Marketed as a “warts-and-all” retelling of the band’s rise and fall, its arrival will likely prompt questions, both on the timing of the film’s release in the shadow of the #MeToo movement and in its seeming disinterest in exploring the gang’s treatment of women.

They’re shown gigging at clubs including the Whisky a Go Go, Starwood and Troubadour, working out stage moves, snorting mountains of coke and getting sexually serviced by young women at every turn. One groupie’s on-screen life occurs solely beneath a crowded table of men, where she awaits new arrivals with an offer of oral sex.

Few in the #MeToo era who watch the band as it conquers clubs, the Billboard charts and the sexual appetites of many young women would argue that the mid-1980s rock scene wasn’t more debauched than it is today.

With R. Kelly, Bill Cosby, Kevin Spacey, Harvey Weinstein and countless other once-powerful men being held accountable for alleged sex-related crimes, though, the so-called spoils of riches that have come to successful men are being questioned across the culture.

In the film, those women who aren’t having sex or otherwise servicing men are mostly ignored or tossed aside. At one point guitarist Mars suggests that a girlfriend stay quiet by saying, “Muzzle that.”

As the saying goes, “That’s rock ’n’ roll.” But is now really the moment to revel in the ways that powerful rich dudes have harnessed their good fortune in service of drug-fueled sexual conquests?

Asked about this, Lee said, “I’m sure there’s going to be a few people who are like, ‘This is disgusting.’ Well, it was disgusting back then,” he said. “I don’t know what else to tell you. Don’t watch it.”

Tremaine said the timing of the biopic’s arrival was “mostly a coincidence.” LBI Entertainment had been trying to make “The Dirt” for years, Tremaine said, and he started planning in earnest nearly a decade ago. The director explained that the goal has always been to tell “a true story of definitely a different time and a different place.”

That time and place spawned Crüe hits including “Looks That Kill,” “Kickstart My Heart” and “Same Old Situation.” The title track from the band’s platinum album “Girls, Girls, Girls” celebrated strippers and name-checked a number of West Hollywood clubs.

Lee not only called the film “a trip down memory lane,” but expressed excitement at the renewed attention, enthusing that “what blows my mind is there’s going to be some 18-year-old kids coming to see this and are gonna go, ‘God, if I could only live in that time. I missed it.’ ”

Some who have read the “The Dirt,” written with Neil Strauss, might beg to differ with the drummer’s prediction. It’s a harsh book in many ways. The way Sixx describes heroin addiction is unflinching, and across the book, members acknowledge deeds that many others would vehemently deny.

During the biopic, one band member offers a word of advice to viewers that aptly captures the essence of the book: “Bottom line is, don’t ever leave your girlfriend alone with Mötley Crüe, ever.”

The project’s arrival has been a long time coming. Strauss’ 2001 book was quickly optioned for film after publication, but after a few false starts, the movie went into production in 2016.

In the three years since, though, sexual misconduct allegations and convictions in the entertainment business have reframed the conversation about power dynamics and sexual assault.

Asked about possible backlash given the shift, Tremaine replied, “No, I can’t say I’m too worried about it. I’m behind what we’re saying and what we’re doing. We’re telling a story of a crazy book that came out.”

He added, “It’s amazing these guys survived, and there’s a cautionary tale in all of this.”

Controversial when it was released, the book was structured as a tell-all narrated from the perspective of the four Mötley Crüe members. Each chapter was recounted in first person, an approach that’s reflected in the Netflix adaptation.

Most notoriously, the book contains an account, excluded from the film, that’s relayed from the perspective of one of its real-life protagonists, bassist and founding member Nikki Sixx. The chapter describes in shocking detail a party near the peak of the band’s career when, as Sixx described it, “a thin, tan, huge-breasted girl” that he knew “grabbed” his hand and, “slurring and stumbling,” pulled him into a small, closet-size room.

After the two had sex, Sixx described fetching Lee and returning to the seemingly debilitated woman. Writes Sixx (as conveyed to Strauss), “In the closet, I stood directly behind Tommy. He … her while she grabbed my hair and yelled, ‘Oh, Nikki! Nikki!’” Sixx then found another guy — “probably someone’s kid brother,” Sixx wrote — and presented him with an opportunity to lose his virginity.

In a statement, Sixx, who declined to be interviewed for this story, wrote: “I don’t actually recall that story in the book beyond reading it. I have no clue why it’s in there other than I was outta my head, and it’s possibly greatly embellished or I made it up. ‘The Dirt’ was being written during a really low point in my life where I was drinking and using drugs again to deal with a crumbling relationship. I honestly don’t recall a lot of the interviews with Neil [Strauss].”

Asked about the facts surrounding the incident in “The Dirt” book, Strauss said he is prohibited by contract from discussing specifics regarding his work with Mötley Crüe. The writer wasn’t involved in the script or production other than as an occasional consultant.

In the years since “The Dirt” was optioned for film, Strauss has earned attention for his own first-person, true-crime podcast with Tenderfoot TV, “To Live and Die in L.A.,” which is among the top shows on Apple’s podcast chart. His autobiographical book, “The Game,” recounted his time spent, and strategies for, seducing women.

Strauss refutes the idea that “The Dirt” adaptation paints a glamorous picture of the band’s history. “I wouldn’t say this movie is a celebration,” Strauss said. “There’s DUIs, death, drugs. They’ve done everything horrible that one can imagine.”

The bad behavior in the past doesn’t mean the culture should ignore it, the writer added. “I don’t know if I want to be in a world where all our culture is washed and cleaned up,” he said, “because I don’t think that’s going to help where we’re going.”

Baker, a successful rapper who performs as Machine Gun Kelly, said the lifestyle shown in “The Dirt” is similar to what he’s witnessed as a rapper on the road. He said he first came across “The Dirt” when he was 12 or 13. “When I read that, dude, everything changed for me. All those stories stuck with me.”

Baker continued: “I came out of high school, no girls liked me, no dudes liked me. I wasn’t cool. I wasn’t accepted. And then the second that I blew as a musician, everything in that book hopped out and turned into real life.” The experiences lend authority to Baker’s wild-eyed depiction of Lee; his performance leaps off the screen.

Stressing that since “The Dirt” tells “a story from an era that’s far, far gone,” Baker concluded that “the only way to do it is honestly. Regardless of what is happening on there, everyone, both male and female, wants an honest story.”

Added Baker, “As far as making a moral decision, I think that’s on the viewer.”

For his part, Tommy Lee dismissed a question on “The Dirt” critics with a chuckle. “Honestly, I think secretly they’re enjoying it, but they gotta have something to complain about.”