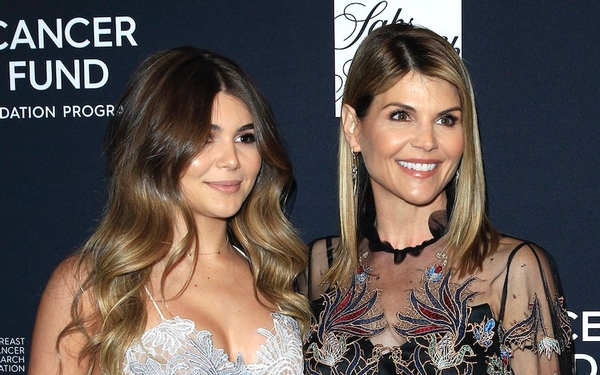 Stories don’t usually survive very long in the swift churn of news these days. But the college admissions criminal scandal has legs, probably because it has everything a big story needs: famous people, rich people, the FBI, renowned universities and major-league cheating, including the irresistible detail about Photoshopping kids’ heads onto real athletes’ bodies. It’s one thing for the rich and renowned to leverage their fame and fortunes into better stuff — wouldn’t we all want that? — but another thing altogether when it comes to breaking the law to advantage their own kids, at what looks like the expense of everyone else’s.

An Oakland woman — a mother and former teacher — has already filed a half-trillion-dollar class-action lawsuit against the defendants, saying that their kids got into top schools but students like her son didn’t, “not because he failed to work and study hard enough but because wealthy individuals felt that it was OK to lie, cheat, steal and bribe their children’s way into a good college.”

Jerome Karabel, a sociology professor at UC Berkeley and author of the book “The Chosen: The Hidden History of Admission and Exclusion at Harvard, Yale, and Princeton,” has parsed what we’re getting wrong and right about this new iteration of privilege that’s as old as our universities themselves.

Q: When you heard this news, knowing what you know, were you shocked?

A: I was a little shocked about I guess the flamboyance of the fraud. And I was shocked in particular by the scheme of pretending to be athletes and getting in via a sport that you’d never even played.

That said, I was not at all surprised that parents would go to great lengths to try to get their children into elite colleges.

Q: These are children who already have all the advantages in the world.

A: On the other hand, you could have all the advantages in the world and still find it hard to get into one of these schools. Some of these schools have rejection rates of 95 percent, even a bit higher. And so the underlying reality here is that many highly privileged children are unable to get into highly selective colleges.

Q: Where does this scandal fit in the arc of the research that you have done about the difficulty in admissions, in the gaming of the system that’s gone on for who knows how long?

But as the society has become more unequal — which is to say as the rewards at the top have gotten remarkably high, and as the situation of people toward the bottom has deteriorated — the anxiety has intensified.

I think what we see here is parents, even privileged parents, kind of desperate to preserve the privileges of their family for their children.

If you look at the United States compared to other countries, if you end up at the top, the rewards are nowhere greater. If you end up toward the bottom, your situation is worse than in other wealthy democratic countries.

Q: The desirability of college, the democratizing of college, is also something recent — what, since the G.I. Bill?

A: The democratization of higher education is mostly a post-war phenomenon, and certainly the G.I. Bill contributed to that. It also was centered not in the growth of highly selective private institutions, but in the growth of public universities and colleges.

So by around 1970, about half the college-age population was attending college of one sort or another. That was historically unprecedented, not only in the United States but in any country in the world.

Q: We heard so much about access to college as proof of upward mobility, that people could pick and choose their careers, their paths, their futures, and college was what unlocked that. Is that all a lie?

What has changed is not so much the distribution of opportunity, but the sense that because the people at the high end have gone to good colleges and are supposedly smart, that their privileges are legitimate.

This is a kind of insidious aspect of the meritocracy, in that it has invested the status quo with the legitimacy that it probably didn’t have in the same way before.

Q: Is this scandal then just a matter of degree and not of kind?

A: The scandal is a real scandal in the sense that there was outright fraud and there was overt illegality. But I think the deeper scandal is what is legal. For example, it is legal to donate money to a university and get special consideration for your child. During the press conference announcing the indictments, (U.S. Atty. Andrew Lelling) distinguished between something that’s legitimate, like donating a building, and something that is illegitimate, like falsifying a transcript.

Q: I think there was even a character on “The Office” whose family did that to get him into Cornell. This was like saying, Well there are legal ways to buy your way in, and then this is an illegal way.

A: That’s exactly right. I think the scandalous character of this is revealed if you look at what would happen if someone tried to get into a leading university in Japan or in France through money. That would be considered a crime that could land you in prison The fact that it’s not only done here, but it’s taken for granted and a U.S. attorney could cite that as an entirely legitimate practice, reveals the underlying pathology of the process here.

Q: When it comes to donating buildings as a means of greasing the skids for your offspring to get into a college or university, the argument is: Look, this benefits everybody, unlike Photoshopping your child’s head on some athlete to get to get him or her into college. Is that a legitimate argument?

A: I think that is an untenable argument for places like Harvard, Yale, Stanford, Princeton — all of which have endowments over $20 billion. For lesser institutions, the argument has plausibility, but I think on the face of it, it’s a form of corruption.

Q: In your book, you found that aspects of what we’ve considered to be the democratization of colleges and the idea of American meritocracy — that those were not the motives when African Americans started getting admitted to the Ivy League, when women started being admitted to formerly male-only colleges.

That old system was different from the system that came to prevail in the 1960s. And in some sense, the system that has emerged now is, in limited ways, more meritocratic. Harvard recently revealed that there was massive favoritism for the children of alumni, so-called legacies. At the same time, the statistics revealed that two-thirds of the legacies were rejected. This is certainly very different from what would have happened 50 or 60 years ago.

Q: If these evidently liberal institutions were not motivated in the ‘60s and ‘70s by broadening the demographics, by opening up or giving access to these ladders of success to minorities and to women, why did they do it?

A: If you look, for example, at the admission of African Americans to these institutions, it’s a quite recent phenomenon. As late as 1960, less than 1 percent of the freshman class at Harvard, Yale and Princeton were African American.

What happened was, America went through a great deal of turmoil in the 1960s, and if you look carefully at the timing, you will see that the increase in enrollments of African Americans came after the race riots of the mid- and late 1960s.

And if you look at the internal documents of the universities during that period, they had discussions, and concluded that the existing order was endangered unless it opened up. So they decided that it was necessary to have at least a decent representation of African Americans, given that the social fabric was falling apart. In the case of women, it certainly related to the woman’s movement.

Q: It’s been a while since I’ve heard people so angry about a story that is not specifically White House or Congress-related. Given that we’re cynical, what has made people so angry?

For the great majority of the population that doesn’t have wealth and privilege, the idea of people abusing their privileges to get more privileges still is deeply offensive, and understandably so.

At the same time, I think there is a lot of mythology around how things actually work in America — the whole rags-to-riches ideology. It’s always been mythical but it has always had a special place in American popular culture.

And then I think a further exacerbating factor is from things like the YouTube video of the student at USC (Olivia Jade Giannulli, daughter of Lori Loughlin) who said she didn’t really care about school. People are asking themselves, Well, my kid worked really hard. My kid’s really put in a tremendous amount of time and effort. And my kid didn’t get in, and that kid does get in? This is unfair.

Q: In the long term do you think this is going to change the way that admissions — which is a fairly secretive process — are done?

A: There may be some changes at the margins but these institutions are very powerful; they have long-established ways of doing things. They have a vested interest in maintaining the opacity of their admissions process. And I think it’s a hard system to change.

But I guess what I would point to is that you could change some things in these institutions. Concretely, you could eliminate preferences for alumni children. You could separate the development (fundraising) office from the admissions office. You could reduce the degree of preference for recruited athletes, which is remarkably high.

But as far as the underlying system, I think it’s not going to change fundamentally, because the way that the society is organized pretty much ensures that the children of the privileged will be judged as more meritorious than the children of working-class and poor people.

These elite colleges have failed to democratize opportunity, but they’ve been quite successful in democratizing anxiety, By holding out the promise that anybody can get in if they are sufficiently meritorious, that has raised the possibility of getting in, and also implied that if you don’t get in you are somehow deficient in merit.

I think there’s a longstanding belief in society that if you want to get to certain high places, your chances will be massively enhanced if you go to one of these schools.

Part of the backdrop to this is that it is a winner-take-all society. If you’re a winner, the rewards are great. If you’re a loser, your situation is really rough.

And because it’s a winner-take-all society, it is to a great extent a win-by-any-means society. People are willing to use fair means and foul to succeed, because it’s a society that totally values success and is in some ways contemptuous of failure.

There’s a great quote from the German sociologist Max Weber.

And that was written over a century ago! It speaks to the situation today, that we have an insecure elite whose privileges are under some social and political assault and they want to feel that their privileges are justified.

Campus News
Colleges campuses are trying to reopen in the fall. The main source of opposition? The faculty
217 views