Trump’s executive order on campus free speech: The key context it leaves out

By The San Diego Union-Tribune (TNS) 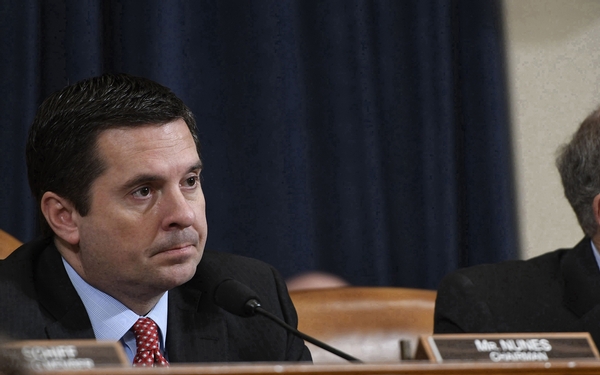 Rep. Devin Nunes (R-Calif.) listens to testimony before the House Permanent Select Commitee on Intelligence related to the Russian cyber attack and investigations into wiretapping, on Capitol Hill.

A credible case can be made that conservatives face considerable hostility at some universities. The problem may not be nearly as pervasive as some right-wing activists assert, but high-profile incidents in which conservative speakers have been heckled, prevented from speaking or disinvited from previously announced campus appearances have reinforced the idea that colleges aren’t the defenders of free speech that they should be.

Given this narrative, it was no surprise that on Thursday, President Donald Trump issued an executive order in which he warned that universities risked access to more than $35 billion in annual federal research grants if they did not “promote free inquiry” and ensure all political views could be aired.

But the president hardly holds the high ground here. His pronouncement came after a weekend in which Trump took to Twitter to blast “Saturday Night Live” yet again for mocking him and suggested the Federal Communications Commission and the Federal Election Commission should investigate the allegedly unfair treatment he faced. Just as absurdly, high-profile GOP Rep. Devin Nunes of Tulare filed a preposterous $250 million lawsuit against Twitter and the operators of two Twitter parody accounts mocking him. So much for the unanimous 1988 Supreme Court ruling saying public figures could be satirized.

Democrats don’t hold the high ground either. In 2017, Politico detailed the wide range of social sciences research that disproved old assumptions that liberals were more tolerant than conservatives. That same year, a UC Berkeley poll found 53 percent of California Democrats backed limits on the speech rights of those with views they rejected. In 2016, liberal environmental activist Bill Nye even suggested that the government should jail people with unacceptable views on climate change.

The truth is that many on both the left and the right invoke free speech rights when it suits them, yet are ready to silence those with opposing beliefs.

Campus News
‘Adulting’ is hard. UC Berkeley has a class for that
513 views