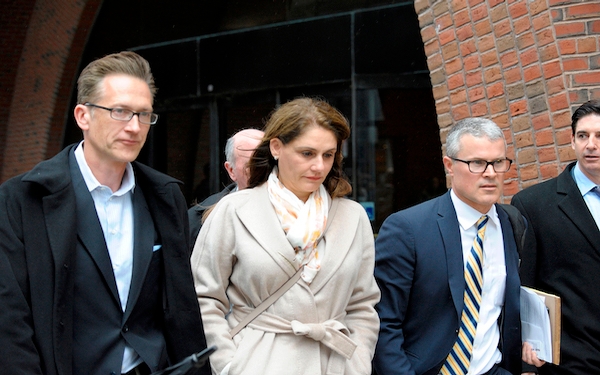 Michelle Janavs, former executive of a food manufacturer, makes her way out of the courthouse after giving her plea in front of a judge for charges in the college admissions scandal.

They filed into court, one after the other — the casino magnate, the Napa Valley vintner, the Hot Pocket heiress — having braved the Boston cold and a line of cameras and reporters outside the courthouse doors, to stand before a judge and have their rights to travel, to speak with co-defendants and to change their residences curtailed or revoked.

It was a situation none of the 15 people who appeared for the first time before U.S. District Judge M. Page Kelley had been in before.

Each has been charged with one count of conspiracy to commit mail fraud and honest services mail fraud. Prosecutors allege the parents paid small fortunes to William “Rick” Singer, a Newport Beach, Calif., college consultant who has pleaded guilty to four felony counts, to sneak their children into top universities with bribes, fake athletic credentials and rigged entrance exams.

A day earlier, Rudy Meredith, the former Yale women’s soccer coach, admitted to taking bribes from parents and pleaded guilty to charges of fraud and conspiracy. A dozen coaches, university officials, school administrators and teachers were arraigned in Boston federal court Monday and pleaded not guilty.

None of the 15 parents who appeared before Kelley on Friday indicated whether they would plead guilty or not guilty, nor were they expected to.

There were, to name a few, I-Hsin “Joey” Chen, wearing an electric yellow vest and accompanied by a woman toting an enormous Louis Vuitton bag, who listened to Kelley’s instructions with the help of a Mandarin interpreter; Michelle Janavs, the Newport Coast philanthropist whose family developed the Hot Pocket; Elisabeth Kimmel, a television executive and adviser to a popular San Diego brewery; Marci Palatella, the chief executive of a liquor distribution company and wife of former San Francisco 49ers guard Lou Palatella; and two couples: Gregory and Marcia Abbott, and Diane and Todd Blake.

They were all barred from speaking with their co-defendants without their lawyers present, but Kelley made an exception for the Abbotts and the Blakes.

For the sake of efficiency, the defendants went before the judge three at a time. Few of the defendants or their attorneys said anything beyond the requisite “Yes, your honor.”

But squabbles between the prosecution and defense over travel restrictions occasionally flared into debates about the strength of the case itself.

In arguing for why his client, Gamal Abdelaziz, should be allowed to travel to Mexico for business, Brian Kelly said the former Wynn executive will not abscond because he believes he can fight the government’s account of his alleged crimes — and win.

Kelly, a former prosecutor in the Massachusetts U.S. attorney’s office, said the government’s case rested on one “deeply compromised” witness: Singer, who, Kelly noted, has admitted to obstructing justice.

“This is a winnable case for my client, and he intends to fight it and win,” Kelly said.

Kelley allowed Abdelaziz to travel abroad occasionally for business, as long as he surrenders his passport between court-approved trips.

Attorneys for Bill McGlashan, a private equity executive, asked the judge to allow him to go to Mexico for a family vacation, saying the seventh-generation Californian was no flight risk. The vacation had been planned months in advance, and the prosecutors’ refusal to let McGlashan enjoy an international holiday with his family was merely “punitive,” said Jack W. Pirozzolo, one of McGlashan’s attorneys.

Eric Rosen, a federal prosecutor, fired back, saying McGlashan had committed a serious crime and “knew exactly what he was doing.”

Rosen laid out the evidence against McGlashan: flight and phone records placing him and his son in Los Angeles the weekend he took his SAT during a two-day extended period; financial records showing he paid Singer’s charity $50,000; and wiretapped phone calls “in which he essentially acknowledged the cheating,” Rosen said.

“In terms of the ‘side door’ scam,” Rosen said, referring to Singer’s admitted scheme to bribe university coaches and officials to recruit the children of his clients as athletes, “the calls are devastating.”

Rosen said they show McGlashan agreed to pay $250,000 to have his son accepted to the University of Southern California as a football recruit, that he knew about Singer’s plans to use photo-editing software to put his son’s face onto a stock image of a football player, and that he sent Singer two photos for that purpose — one of his son running, the other of him playing in the family’s backyard.

Rosen said the government has records of a text McGlashan allegedly sent Singer in late September 2018, asking when he would know if his son had been admitted to USC. Rosen disclosed that McGlashan didn’t go through with the recruiting scam because he was told in October 2018 that Singer was being investigated by the FBI and the IRS.

Rosen’s rundown of the government’s case against McGlashan prompted a retort from Pirozzolo, his attorney.

“I want to make it crystal clear we contest” the prosecution’s account, Pirozzolo said, adding that Rosen’s opposition to letting McGlashan go on vacation with his family was “entirely punitive and totally inappropriate.”

Rosen, for his part, noted that McGlashan owns a $12 million home in Montana that would be a serviceable getaway.

Kelley ruled against allowing McGlashan to take his vacation abroad.

All 15 parents in court Friday waived their rights to a preliminary hearing. An additional dozen parents will make their first appearances in Boston on Wednesday, including actresses Felicity Huffman and Lori Loughlin.