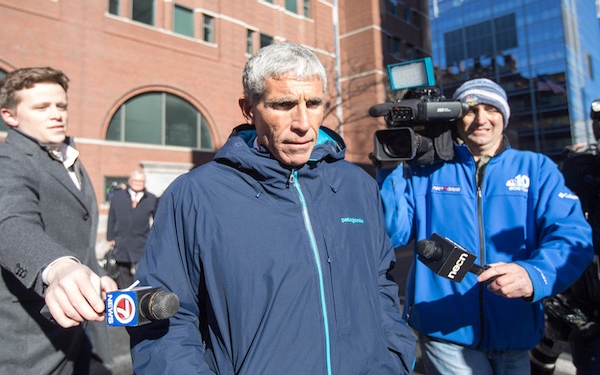 Manhattan millionaires Gregory and Marcia Abbott were among the moneyed moms and dads making their first appearances in a Boston courtroom Friday in the college admissions bribery scandal.

The beverage packaging boss and his wife are accused of shelling out $125,000 to have a paid proctor correct answers on their daughter’s ACT and SAT tests last year.

The scheme lifted the daughter’s ACT score from a 23 to a 35 out of 36 and won her a perfect 800 math score on the SAT, according to an FBI affidavit filed by prosecutors.

Magistrate Judge Mary Page Kelley told the couple they must refrain from smoking marijuana while out on bond for charges of conspiracy to commit mail fraud and honest services mail fraud, according to the Boston Globe.

Meanwhile, the wealthy couple’s rapper son Malcolm Abbott, who goes by the name Infamous Billa, is selling a $30 tee shirt online with the words “Free Education” on the front and a photo of him smoking a blunt on the back.

He recently told Vanity Fair he plans to donate a portion of the proceeds to the nonprofit Nyack Center to help disadvantaged kids.

The Abbotts heard the charges pending against them along with 13 other prominent parents including Hot Pockets heiress Michelle Janavs, Miami developer Robert Zangrillo and and Agustin Huneeus, founder of the popular Quintessa winery in Napa Valley.

Actresses Lori Loughlin and Felicity Huffman — the most famous faces among 33 parents charged in the scam — originally were due to appear Friday but were granted continuances after their lawyers asked for more time. They’re expected in court Wednesday.

Prosecutors claim the dozens of parents paid big bucks to get their kids into elite universities such as Georgetown, Stanford, UCLA and USC with rigged test scores, bogus athletic recruitments or a combination of the two.

In the case of the Abbotts, prosecutors claim the parents worked with scam orchestrator William “Rick” Singer to fix answers on an ACT test taken by their daughter in April 2018 and an SAT test taken in Oct. 2018.

Marcia Abbott was allegedly recorded on a Sept. 4 phone call telling Singer she hoped to get her daughter into Duke University and was worried a prior SAT exam taken without any cheating could be a problem.

“She’s convinced that she bombed the lit because she was too tired, so … And (Duke) told us they didn’t want anything below a 750,” Abbott said, according to prosecutors. “Even if she gets like a 740, 730 on her math, she still needs to get higher.”

In the end, the test-correcting scheme inflated the daughter’s ACT scores and won her the perfect 800 on math and a 710 on the SAT literature subject test, prosecutors claim.

She’s accused of paying $150,000 to rig test scores for her two daughters and have the older daughter admitted to USC as a beach volleyball recruit, even though she didn’t play the sport competitively.

Janavs allegedly was caught on a wiretap telling Singer that while her older daughter was aware of the scheme, she wanted to keep it a secret from her younger daughter.

She said the younger daughter was studying hard for the ACT and vowed to keep taking it until she received a score of 34.

“(My older daughter) came to me and she says, ‘You’re not going to tell (younger daughter), are you?” I was like, ‘No.’ Weird — weird family dynamics, but every kid is different,” Janavs said during the call, according to the transcript excerpt released by prosecutors.

Huneeus, meanwhile, is accused of paying at least $50,000 to have someone correct answers on his daughter’s SAT exam and bribe USC officials to designate her as a water polo recruit.

At one point, Huneeus allegedly complained that his money only bought his daughter a score of 1380 out of a possible 1600 on the SAT exam she took in March 2018.

“If you had wanted to, I mean (my daughter’s) score could have been 1550 right?” Huneeus griped to Singer in a wiretapped call last August, according to prosecutors.

The Friday court appearances followed four days after a dozen defendants who allegedly received money from the scam pleaded not guilty in the case.

Singer pleaded guilty in the case earlier this month and was cooperating with the government during the recorded calls with parents that make up much of the government’s most damaging evidence in the case.