In Fez, Morocco, an oasis amid the bedlam of the ancient medina 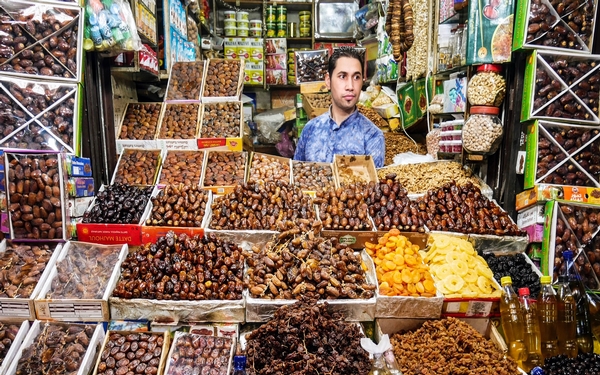 FEZ, Morocco — The sun was low over the souks, reflecting off the rust-colored hills, and my wife and I were enjoying a rose-dappled sky from chairs on our rooftop. Suddenly, the call to evening prayer boomed from a nearby mosque.

Within seconds, dozens more muezzins echoed from other minarets, a wave of sound that washed over and around us. It was an unmistakable reminder we were in the Fez medina, the cultural and religious center of Morocco and, once, of much of the Muslim world.

Moments later, the sounds of life resumed, the tap-tap-tapping at fiery forges in the copper and brass market, the braying of donkeys (the only nonhuman transport allowed in the medina) as they clattered down stone steps, the cries of hagglers in the herb and spice stalls, and the honking horns outside the 14 arched gates and 15 miles of ramparts that long have kept the modern world at bay.

Lights twinkled from the tower of Al Quaraouiyine, founded in 859 and now the world’s oldest degree-granting university. The first French pope, Sylvester II, attended in 998 and supposedly brought Arabic numerals to Europe.

The Jewish philosopher known as Maimonides studied here in the 12th century. A plaque marks the alley where he supposedly lived, as does a tiny Chinese restaurant named in his honor.

We had arrived in Fez that day. A man had grabbed our bags from the taxi and led us at a half-run through the first gate, then another, over a small footbridge and deep into the labyrinth of 9,600 narrow lanes inside the ancient walled city.

Most have no names, but our guesthouse turned out to be three blind turns down a dark passage called Lane of Seven Twists.

Dar Seffarine, named for the nearby brass market, was an ideal oasis in the middle of the hustle and bustle in the medina. A dar is a traditional large Moroccan home, generally two floors around an open courtyard flanked by columns and corridors, all lined with an ornate mosaic of tiles known as zellij and intricately carved and painted stucco called tadelakt. This dar had seven guest rooms, and each had been extravagantly restored.

Our two-room suite was downright palatial. Past an arch with towering wooden doors, a multicolored riot of zellij lined the floor and part way up the walls. Above that, intricate calligraphy and a sculpted frieze circled the room.

Worn Berber carpets lay underfoot, and a magnificent inlaid cedar ceiling soared into a dome 20 feet high. Stained-glass windows near the top sent shafts of blue, red and yellow light bouncing around us.

We had no TV, no door locks and spotty Wi-Fi. That was the point.

A lavish breakfast was served family-style so guests could meet, and dinners were offered the same way. We never had a moment’s concern during our four nights here, thanks to the solicitude of owners Alaa Said and his wife, Kate Kvalvik, enterprising Norwegians who have made their home here.

Said was an Iraqi conscript in Saddam Hussein’s war against Iran in the 1980s, and after escaping an Iranian prison, he fled to Oslo, Norway, where he was accepted as a refugee and became an architect. After a professor suggested he specialize in Arabic architecture, he and Kate settled on Fez in 2003.

They bought the dar — thought to be 600 years old, but no one is certain — and hired 80 craftsmen to restore it, plus add electricity, toilets and the rest. It had been abandoned for decades, so it took three years — and tens of thousands of donkey loads — to make it livable.

It was a bold move. The medina was an impoverished and forbidding place then, and their dar was only the third guest house in it. There are about 200 today, thanks to a boom in tourism. Camel caravans once crossed the desert to bring sugar, salt and gold to Fez from Timbuktu and beyond. Now, Chinese tour groups arrive by bus.

But the medieval city remains a place of magic, especially in the early morning and after midafternoon, when the crowds thin.

For our first day, we hired an excellent guide, Khlafa El Asefar (feztourguide.com, khlafa82@gmail.com), to help us navigate the maze and show us the historic tombs, palaces, fountains and museums. The medina has two adjoining quarters — 9th century Fez el Bali (or Old Fez) and 13th century Fez el Djedid (or New Fez), which once included a thriving Jewish enclave. One of our first stops was a recently restored small synagogue, the last of 17 that once existed here.

Asefar was immensely proud of how the medina had retained its roots and vibrant life. “We have 11 madrassas,” or Islamic schools, he told me. “Ten of them date back to the 14th century.”

Another sign of how little has changed: The Chouara leather tannery operates much as it did 800 years ago, using pigeon poop and pomegranates to help soften cow, sheep, goat and camel hides. They then are washed and dyed in round wells with the brilliant colors that dominate Islamic art — jasmine white, poppy red, mint green, kohl black, indigo blue, saffron yellow.

“All spices, flowers and minerals,” Asefar pointed out.

For lunch, we ducked into the Nejjarine II, another lavishly restored dar. Every inch seemed covered with glazed terracotta tile, carved cedar or stenciled brass.

Waiters swooped in with our mezzo — 15 separate plates of salads, olives, beets, lentils and the like. We staggered out after a steaming tagine of lemon chicken and couscous, a flaky pastry filled with shredded pigeon and dusted with cinnamon, and heaping plates of fresh fruit and sweets.

It was clear that the tourist boom and a UNESCO designation as a World Heritage site have helped the medina reclaim some of its long-lost glory.

Ragged stone alleys have been repaired, and garbage is swept up each night and hauled out by donkey. Police have reduced crime substantially, and the air smells of spices, not smoke, after thousands of kilns, bakeries and forges were converted from wood to gas. Residents have used government grants to restore scores of homes, some with lush gardens, and shops have replaced sliding steel doors with traditional wooden shutters.

As we were exploring on our own the next day, my wife and I found that a polite “Salaam Alaikum!” — peace be upon you — disarmed pesky salesmen and touts. We were served mint tea and shown hospitality as we got lost in the bedlam.

“I feel like I’m in a video game,” my wife remarked as we somehow returned to the same noisy square three times in error.

Once, a man in a hooded djellaba abruptly pulled my arm. When I yanked it back in alarm, he pointed behind me. He had saved me from being run down by a donkey with a load of bricks on its back.

Back at the dar, I sat with Said under a tangerine tree in the garden and asked him to tell me about the ancient walled city. The medina seemed pure chaos. The 57-year-old architect urged me to see it through his eyes.

The medina is home to about 150 mosques, and each anchors a communal bread oven, a public bathhouse and a fountain, the mainstays of Islamic life. Behind them are the souks, or markets, and then the houses with their heavy doors.

“It’s urban planning by function,” Said said. “It’s very organic, with the mosque as the tree, and everything growing from it.”

The high walls along the narrow alleys create cooling shadows for the baking summer heat, and the intermittent reed or wooden roofs create a natural breeze, he said. The lanes snake this way and that as protection from the direct sun and occasional sandstorms.

The houses are similarly designed for the desert — and for Islam. During summer, families live on the lowest level, where the floors are marble and glazed tile and thus cool to the touch. In the winter, they move to the cedar-lined and carpeted rooms above, which retain the heat. Our room was up a steep, twisting staircase; halfway up was a passage to a hidden alcove with an iron grill, a place for a prospective bride to view her suitor down below.

The profuse ornamentation in the homes and public spaces throughout the ancient city featured only repeating geometric or floral patterns — all done by hand. Said laughed when I asked if it was Moorish, the design I associate with the Islamic period in Spain.

“No, it is much more than that,” he said. “Fez is very rich in culture, because it collected art from around the Muslim world when it was the center of that world. The style of wood carving traces back to Egypt. The tiles are from ancient Rome and Persia. The flowers in the stucco are lotus blossoms from India. The calligraphy and the arches are from Iraq.”

Said is driven by that remarkable history, little understood or appreciated in the West. He said he isn’t finished with Dar Seffarine.