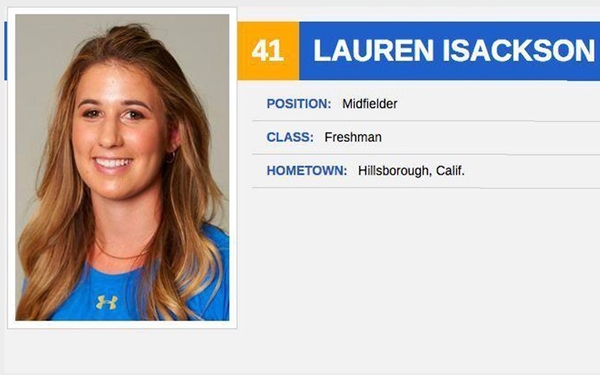 No one was looking at Bruce Isackson.

Seated in a Boston courtroom recently among a dozen other parents implicated in a scheme to defraud half a dozen top universities, Isackson — a real estate investor from Northern California — was overshadowed by his more famous co-defendants.

A few rows ahead of him sat actress Lori Loughlin and her husband, designer J. Mossimo Giannulli. Across the aisle was another actress, Felicity Huffman, whose gaze did not once meet the pack of reporters who trailed her out of the courthouse, then to the car that waited to whisk her away.

But Isackson and his wife, Davina, could play a central role in an investigation that has shaken American academia and forced a reckoning over the illegal and legal ways money offers access to higher education.

Of the 33 parents charged in the investigation, the Isacksons are the only ones to have signed cooperation deals with prosecutors.

A source familiar with the case said prosecutors want to learn more about who at the University of California, Los Angeles and the University of Southern California knew of the recruiting scheme the Isacksons allegedly used to slip their two daughters into the universities as ersatz athletes. The source spoke on the condition of anonymity because the person was not authorized to comment publicly.

Prosecutors have said the colleges involved in the scheme are victims, not targets, of the growing criminal investigation. The 10 university coaches and officials charged so far in the investigation have been characterized as rogue actors who flouted both the law and school policies in pocketing bribes to admit the children of wealthy and powerful families as recruited athletes.

But the Isacksons’ cooperation could provide prosecutors with another firsthand account of the recruiting scheme and shed light on whether other university officials or coaches were involved. What they say could also be of interest to USC and UCLA, which have launched internal investigations into what went wrong.

The Isacksons’ cooperation deal at this stage in the investigation is significant, said Patrick Cotter, a formal federal prosecutor who helped win the conviction of mob boss John Gotti in 1992.

The admissions scheme’s mastermind, Newport Beach, Calif., consultant William “Rick” Singer, has already been apprehended and pleaded guilty. Prosecutors are probably seeking new leads on new targets, and it appears the Isacksons have convinced them they have that to offer, Cotter said.

“From what this couple have told the government, the government thinks they could have information that could lead to further arrests,” Cotter said. “The government seems to believe they’ve got legally admissible evidence, and that’s significant.”

In a filing last week, prosecutors said plainly what has been rumored for weeks: More people will be charged in the investigation.

The prosecutors asked a judge for a protective order on evidence they will begin turning over to defense attorneys, saying the wiretaps, bank and academic records, emails and surveillance photos they’ve amassed “include information concerning uncharged co-conspirators and targets of the investigation who have not yet been publicly charged.”

Prosecutors often pursue large-scale investigations in waves, hoping those charged in the first round will cooperate and yield evidence that can be used to charge others, said Lawrence Rosenthal, a professor at Chapman University’s Dale E. Fowler School of Law and a former federal prosecutor.

In his plea agreement, prosecutors recommended a sentence for Bruce Isackson at the “low end” of sentencing guidelines that call for 37 to 46 months in prison. For Davina Isackson, they suggest a sentence at the low end of 27 to 33 months in prison.

In a statement last week, the couple said they were “profoundly sorry,” having “harmed and embarrassed” their children and disappointed their family and friends.

“We have worked cooperatively with the prosecutors,” they said, “and will continue to do so as we take full responsibility for our bad judgment.”

Among the 33 charged parents, the Isacksons are unique in that they are accused of taking part in recruiting schemes that breached two universities.

According to court records, the Isacksons paid Singer $600,000 to get one daughter into UCLA and another into USC. Of the $250,000 they spent to ensure their older daughter was admitted to UCLA as a recruited soccer player, $100,000 went to Jorge Salcedo, the former men’s soccer coach at UCLA, according to an indictment charging Salcedo and six other coaches and officials at universities with racketeering.

Salcedo, a former UCLA star who made the game-winning penalty kick in the 1990 national championship, resigned after being indicted. He has pleaded not guilty.

No other UCLA employee has been charged in the scheme. But prosecutors allege that at least one coach on the UCLA women’s soccer team was forwarded an email with Lauren Isackson’s bogus credentials before she was approved by a student-athlete admissions committee in 2016.

The Isacksons’ younger daughter was admitted to USC as a recruited rower. She had never rowed competitively, prosecutors say.

Two USC employees — Donna Heinel, a senior official in the university’s athletics department, and Jovan Vavic, the water polo coach — have been indicted on a racketeering charge. They have pleaded not guilty.

No one in USC’s rowing program has been charged. But Singer told a parent, on a call recorded by investigators and quoted in an FBI affidavit, that an unidentified “USC crew coach” told him, “You guys help us, we’ll help you.”

“The government is not going to make a deal and offer leniency if all a witness has to offer is third-hand hearsay,” Cotter said.

But the structure of Singer’s admitted scheme does not lend itself to tell-all cooperating witnesses, said Rosenthal, the Chapman law professor. Rather, he said, it resembles a “hub and spokes” conspiracy, in which everyone went through Singer and individual parents didn’t know one another, compared to a “wheel and spokes” scheme, in which everyone is connected.

Any one parent’s knowledge of the scheme could be limited, Rosenthal said. He pointed out that, in the Isacksons’ case, prosecutors make no promises in the cooperation deal to tell a judge they deserve leniency.

Some of the biggest spenders in Singer’s scheme remain unidentified.

Another, identified only as the father of “Yale Applicant 1,” spent $1.2 million to ensure his daughter was admitted to Yale as a recruited soccer player.

Pressed by a judge about that father’s identity, Eric Rosen, Lelling’s lead prosecutor in the investigation, said: “There haven’t been charges publicly revealed about the family of Yale Applicant 1.”

In Los Angeles, Harvard-Westlake School has received subpoenas for records related to at least two students whose parents have not been charged, a person familiar with the matter said.

Under their cooperation agreement, the Isacksons agreed to testify if called by prosecutors. Their testimony could buttress the prosecution’s account and undercut an argument already being floated by some defense attorneys — that Singer, who has already admitted to obstructing justice, is the crumbling keystone of the government’s case.

He began cooperating with authorities last year in a bid for leniency. At the instruction of the FBI and under the pretext of being audited, he called dozens of his clients and spoke with them about their alleged involvement in his scheme.

“The government wants to corroborate everything Singer tells the jury,” said Manny Medrano, a Los Angeles defense attorney and former federal prosecutor. “The defense is going to aggressively attack Singer’s credibility, so the prosecutors are going to use this couple to ensure he’s not the only one describing the scheme.”

Campus News
What’s the risk of COVID-19 for a healthy young person?
1,096 views